Almost 2 years ago I purchased a 1970 850 Coupe 903cc that previously was being turned into a "gasser", so they pulled just about everything out of the car and cut anything and everything where ever convenient. Since then, my son and I replaced the entire braking system, had the engine rebuilt (by Danny at FIAT), fixed some serious rust issues behind the back seat, and labeled the entire wiring harness. The engine is back in but when we tried to start it, the starter would spin the engine only a quarter turn or so. I cleaned up the body ground from the battery and will be giving it another try this morning, but I suspect the no-start may also be related to what I believe is the only remaining unidentified wire.

I know per the wiring schematics that there is a brown wire going from the alternator (I confirmed this when I found the cut end) that goes to the starter, but I do not know where it goes on the starter. Does anyone have any pics of this wire?
F

Hi Michael,
The wire in question is the output current from the alternator to the B+ terminal of the starter solenoid. When charging the current then flows toward the battery at the front of the car. It should start and run without this wire connected as I'm at almost the same stage with my '67 and sneak it around the block with no license plates. Please, those of you with EE degrees don't point out the error of my terminology as to current/hole/electron flow. Chris at Fiat Plus is currently sending me an electronic regulator that I'm putting inside the gutted original bulky '67 regulator to give the car a "vintage" look.
As self promotion I've got a nice good starter on Ebay currently. Al Cosentino (of FAZA fame) always advocated towing a newly rebuilt motor as the best way to start the first time.

Thanks Frank. We just gave it another try with more confidence in the battery ground and this time I noted that the flywheel will spin for a bit, but then seems to tighten up. We put a socket wrench to the alternator and the flywheel moves until it hits a certain point, then doesn't seem to want to move. It will spin back in the opposite direction, but then tightens up again. So I am thinking more and more that something non-electrical may be the issue.

Do you happen to have a pick of the wires coming out of the starter & solenoid? And can you send a link to your ebay listing? I looked but couldn't locate it.

Update: We got it to turn over, albeit slowly - turns out my son wasn't stepping on the clutch I checked and it is in neutral.

The distributor is turning, but slow as well. Still no gas in the fuel lines either, but realize the Coupe has a mechanical pump so I suspect it will take some time to pull the fuel from the tank. Fuel lines are all brand new; we removed, cleaned out, and reinstalled the gas tank; and also installed a new fuel sending unit.

What about dripping a little gas in the carb directly get it to fire sooner (not enough to flood it). The sooner the engine fires and is spinning faster, the faster the mechanical pump can complete the regular supply.

i.e.: avoid damaging the starter by having it do all that cranking just to get the fuel lines primed?
F

https://www.ebay.com/itm/183934517332?ssPageName=STRK:MESELX:IT&_trksid=p3984.m1555.l2649
850 Starter with solenoid. As mentioned priming the carb with a little gas should help. Be sure to do the basic drill: 1)timing marks about 1/2" to right of TDC marks. 2) points should start to open at that location. Be certain the TDC mark is on the compression stroke and NOT the exhaust stroke. 3) is spark good with plug pulled, connected and grounded without zapping yourself. 4) looking down main choke does gas shoot from accelator (can't spell worth a damn) pump? Should be like a fine squirt gun spray. Also look to see plugs going to right locations. Tighten cable at starter and at battery + and_ terminals. Is the ground link attached from the motor to the chassis? If this is missing starter will seem bad. I've done all of the above wrong over the years so don't feel alone.

Frank's comment to "tighten cable at starter, and battery + and - terminals" made me remember another item I've run into over the years - make sure the battery, ground and starter cables are good. Measure/ohm them out. Check that their connection at the terminal, not just at the battery/starter posts, are good. I've had cable that looks good, and then you wiggle where they feed into the terminal connection/clamp and they crack off. On a VW Diesel Rabbit, there was welded 5-point connection along the B+ feed on the side of the engine bay - that weld had corroded and the wire was not making contact to all the paths of the feed. And then make sure the grounding points are clean, too. Make a thin smear of a little contact grease on these connection, too.

I would spritz some starter fluid into the carb to get it to start up and bring the gas up from the fuel pump/tank.

It should spin it over pretty quickly if the connections are all good.

I was confounded for a long while by a poor ground connection to the battery which kept my car from spinning over. Even after installing a gear reduction starter. Oops.

Thanks for all the suggestions! Earlier today we did spray some starter fluid in the carb and at the same time we replaced the ignition coil because I noticed there was no spark going to the distributor. When we tried to start it up, there was a big spark above the ignition coil before it cranked. My guess was a grounding issue, but am open to suggestions. Then we cranked the engine, there still was no spark going to the distributor. Wondering if the spark busted the new ignition coil...

I just ordered a second ignition coil from Rock Auto and this one has a new external resister on it (the existing one has a kinda loose connection).

I will try and check all the connections for proper grounding and ohms. My oldest son always did this for me, but he headed off to college leaving me to try and recall what he would do. At least he left his multi-meter.

I guess bottom line is that at least it is cranking, but now I just need to figure out why there is no spark.
F

On starting my new rebuild several weeks ago the coil had a little over 1 ohm impedance. That translated to about 12 amps through the new points! They toasted instantly but since they were new I never looked. Eventually I figured it out and found 3.6 ohms to be what's needed. Don't feel alone Karl as I also bought a reduction started for that extra spin. That's why I'm selling the perfectly good one on Ebay…

Frank L. Di Gioia said:
Be sure to do the basic drill: 1)timing marks about 1/2" to right of TDC marks.
Click to expand... 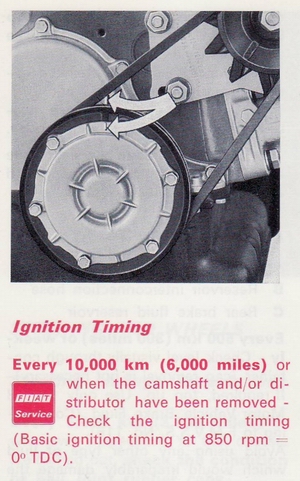 I'm thinking Frank's comment was more about being at a point in the crankshaft position and compression cycle that would would make for quicker starting once the starter is engaged, and not a comment on how to set the timing.

But I am still new to this Fiat experience and may be incorrect in my interpretation.

khnitz said:
I'm thinking Frank's comment was more about being at a point in the crankshaft position and compression cycle that would would make for quicker starting once the starter is engaged, and not a comment on how to set the timing.

But I am still new to this Fiat experience and may be incorrect in my interpretation.
Click to expand...

The factory Shop Manual says to set the timing as Frank indicated (10°BTDC), but most people forget (or don't know) that the Manual is talking about the earlier 843cc & 817cc engines, NOT the later 903cc. 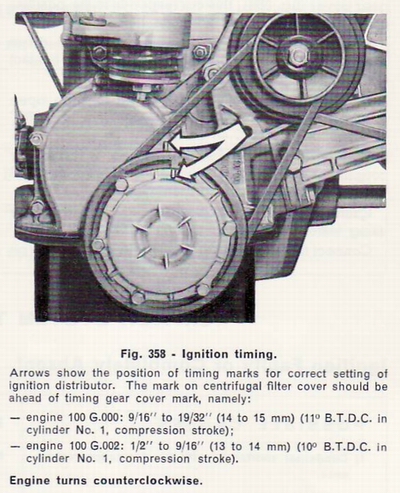 Fiat issued a small booklet-style addendum to the Shop Manual for the later 903cc cars, but most people don't have it or know it exists.

Besides, having the timing set correctly will very likely "make for quicker starting once the starter is engaged".
Last edited: Sep 3, 2019

Jeff Stich said:
The factory Shop Manual says to set the timing as Frank indicated (10°BTDC), but most people forget (or don't know) that the Manual is talking about the earlier 843cc & 817cc engines, NOT the later 903cc.
<snip>
Besides, having the timing set correctly will very likely "make for quicker starting once the starter is engaged".
Click to expand...

Thanks for the details in the Model Year differences. Fortunately, I have the owners manual for mine, once I get around to starting in ... hopefully over the winter.

I did assume that, in trying to start a car, the timing would first be known as set correctly. That said, having had to kick-start my first motorcycle (a 400cc Honda twin), engine/crank/compression position at the start of the kick stroke could have a much different result on the ease of the start of the kick attempt.
F

Damn, no wonder my car gave me starting problems!!! Thanks Jeff. SORRY I SPREAD THE WRONG INFORMATION. I never heard of the update. After starting I did adjust things with a timing lightn as a saving grace. Now to go back and see where that is... 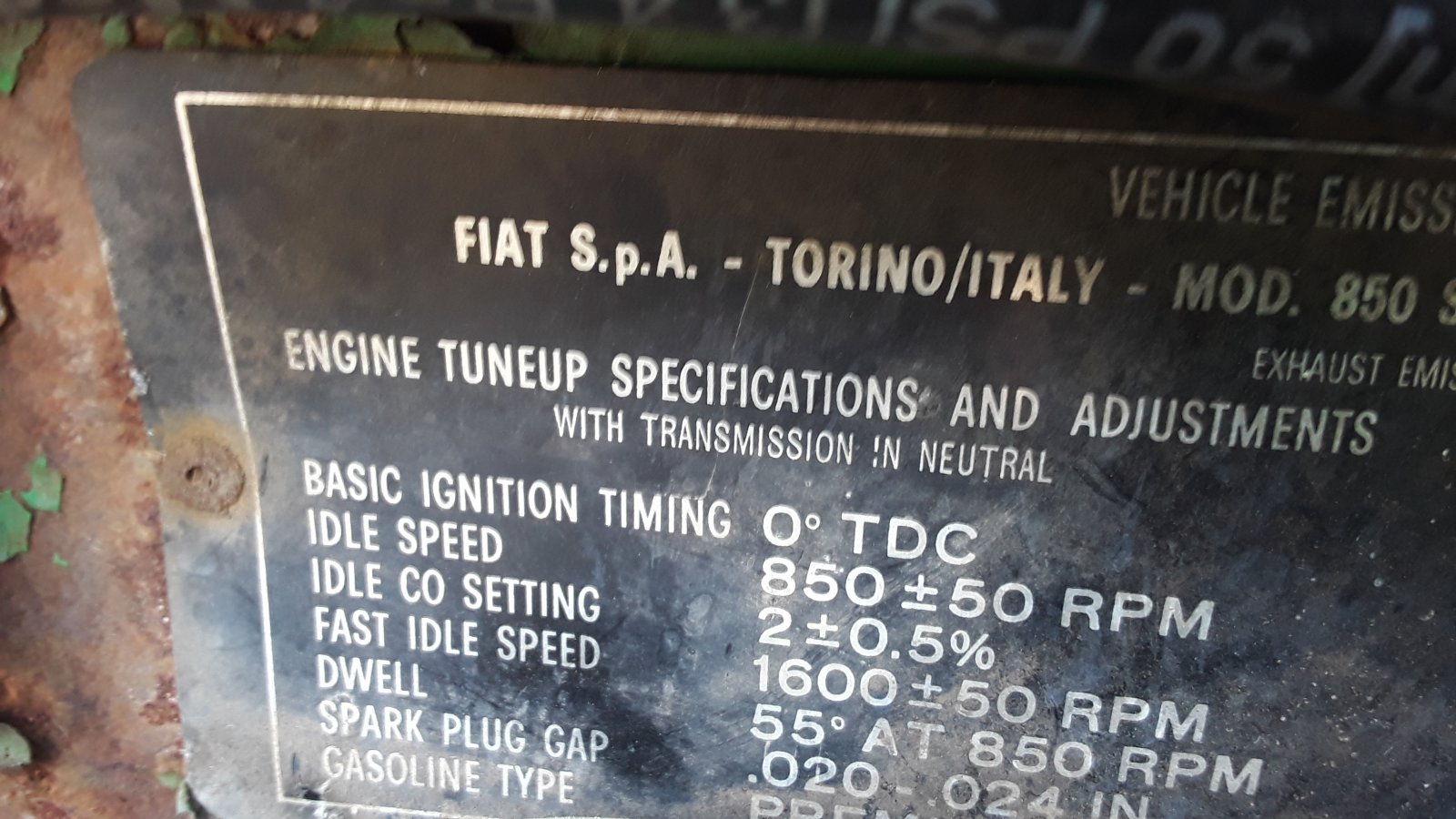 In order to do a preliminary check before starting, pull the plugs, spray a bit of oil in the cylinders and then with the key off jump the starter and see how it cranks.
This will prime the carb and also build some oil pressure. If the engine has been sitting for a while since the rebuild the oil will lube the cylinder walls.
If everything seems ok put the plugs back in and see if it will start.

On the starter, you might want to disassemble it and check the armature as the copper gets tarnished over time and clean as needed. Also check the brushes to see if they're badly worn. Replacement brushes are available. 99% of electrical issues in life are caused by bad grounds so I would make sure all contact surfaces are clean and tight. There should be a ground strap from transaxle/engine to the chassis. The contacts inside a solenoid can sometimes get pitted and dirty and have a poor connection.

If you are careful, you could use a piece of wire to the coil to see if you get a spark. Pull back a lead on a plug and have the end about 1/8" from bare metal. You should have a healthy zap. You could also remove all the plugs so the engine will spin easily and see if you get good sparking.

If still having issues, time to get out the OBDII reader...

gene cooley said:
HINT: In its' infinite wisdom the EPA provided us with these tags so we wouldn't have to buy a shop manual. View attachment 24992
Click to expand...

On USA cars, this tag is normally found riveted to the firewall just above the radiator. Unfortunately, it seems too many of them end up looking like this:

Jeff Stich said:
Ahh, you beat me to it!

On USA cars, this tag is normally found riveted to the firewall just above the radiator. Unfortunately, it seems too many of them end up looking like this: