Hey guys, I just picked up another Fiat 850 Coupe. The car goes in to all 4 forward gears fine, but just won't go into reverse. I asked the previous owner and he said it worked for him with little trouble. I am familiar with these and I know how sometimes you have to inch up a bit for the stick to go into reverse, it sometimes doesn't go in from a standstill. It's just not working and I am wondering if maybe the linkage got messed up from vibration when the car was transported across country. Is there an adjustment somewhere or anything I can check? Every time I push down on the shifter and pull back to the right it ends up in 4th gear and moves forward.

tomnj said:
Hey guys, I just picked up another Fiat 850 Coupe. The car goes in to all 4 forward gears fine, but just won't go into reverse... Every time I push down on the shifter and pull back to the right it ends up in 4th gear and moves forward.
Click to expand...

Starting from a Neutral position, while pushing down, push the lever to the right first & then pull it back to engage Reverse.

If this doesn't work, check the passenger-side transmission mounting bracket for cracks right where it bolts up to the transmission. A broken or sagging mount will often lead to difficult shifting between gears, with going into Reverse being the first noticeable "casualty".

As far as adjustment goes, the metal/rubber "lollipop" link between the rear end of the gearshift lever rod (coming out of the rear of the center floor tunnel) & the trans shift lever (on the front end of the transmission) has two 13mm bolts holding things together. These can be loosened to help align things better, then re-tightened to keep them there.
Last edited: Sep 18, 2018

Thanks Jeff. I will check that. I still couldn't get it into reverse, so will check the trans mount and linkage. The car shifts really nice and easy in the 4 forward gears. Here's a picture. How do I lower the front end about an inch? I believe I saw something about an Abarth spring or lowering block. Where do I get that? 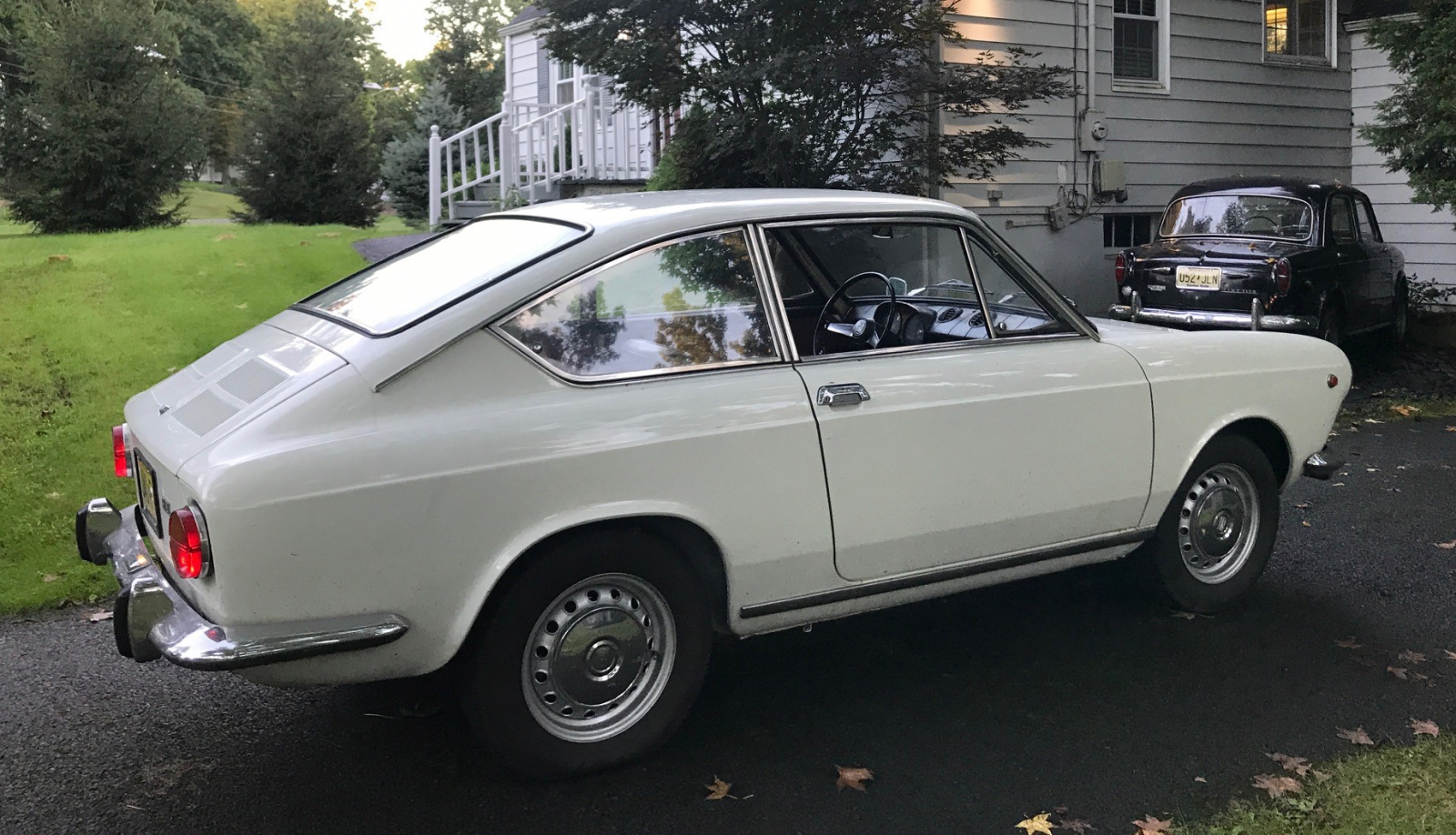 I think this: http://mrfiat.com/italian/fiat/fiat-850/suspension/fiat-850-abarth-ot-1000-leaf-spring.html is what you might be looking for.

A spring shop can reverse the eye for you and restack the existing spring with new rubbers and press in new bushings.

I have one of both. Honestly, I think it drops the front too far and you get bump steer issues. I would respectfully suggest you consider keeping it at stock height. If you do lower it, don’t forget that to trim the bump stops a half inch or so or the car will bounce around when it hits them when going over larger bumps.

You might have someone take a pic of your car with you in it, it may be just the right height with your weight added to the car.


Mine with a normal spring 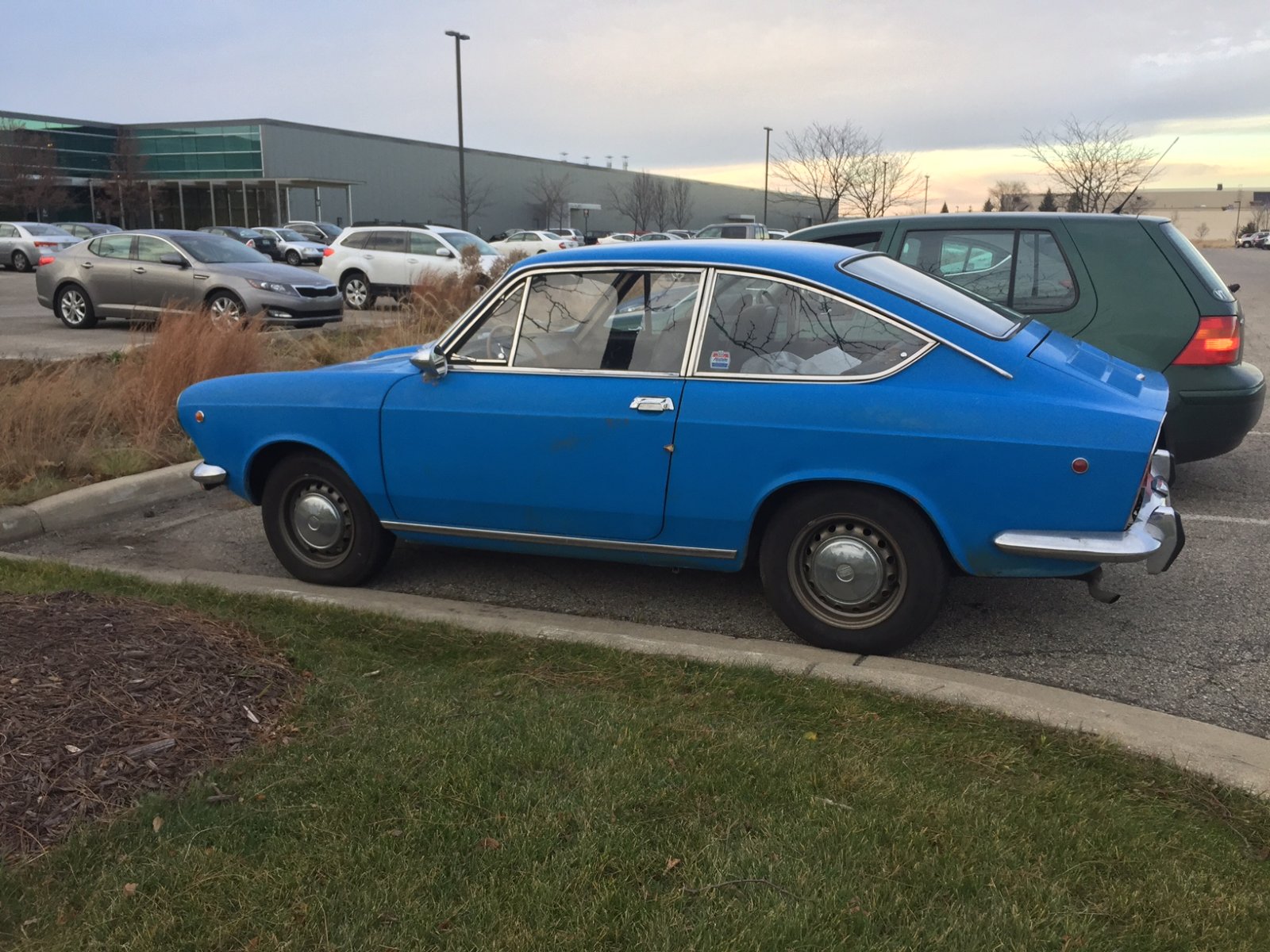 Very nice Coupe Karl. Great color. Same wheels as mine. I am looking to throw a set of Cromodora's on it.

What about a lowering block like this? Says it lowers it 1.5", but can be adjusted with shims. The replacement spring lowers it 30 mm (approx 1.2").

Thank you. It is far from a perfect car but I really love it.

Either approach will work. I would suggest driving it around a bit with the stock set up. Where I live the roads are less than ideal and I find the extra travel to be helpful

Depending on the car and the parts it can be hard to get back to appropriate camber when you lower it. I have also found the bump steer can make the car much more difficult to drive at speed.

Ultimately these are bolt in parts, if you don’t like how it turns out you can always remove them and you’ll only be out a bit of money.

Ok here's an update. The car will definitely not go into reverse no matter what I do. When I try it's like the stick is banging into something metal and not moving any further. Rocking the car, moving up first, trying the other gears first, etc. does not help. Warning it up (going for a drive) doesn't help either. So I took a closer look. I have another 850 Coupe that goes into reverse without issue and compared the linkage. When I had someone move the lever while I looked at the linkage, but cars looked very similar, the linkage rotates a bit when attempting reverse, pretty much the same amount on both cars. The previous owner (I bought the car online) told me it went into reverse with some coaxing, but he could have been lying.

So with all of that said, I took Jeff's advice and looked for a loose mount. Sure enough, the bracket that holds the trans to the mount (2 13mm bolts) was loose, so I tighted it. Hard to get to the top bolt without a lift, couldn't tell if that one was loose too. I thought maybe that would fix it, but unfortunately the same problem. I also noticed the trans is wet and may be low on fluid, so I plan to tip that off, but I wouldn't think low fluid would prevent a manual Shifter from moving into a specific gear. There is no noise coming from the trans and shifts beautifully into 1-4. Clutch is very good too. I would try adjusting the linkage, but wouldn't know which way to move it, back or forward with the 2 bolts loose. Any other ideas? If I can't fix it I am looking at a huge job to replace the trans

I had the same problem on a 850 coupe 30 years ago. I recall the problem was a worn connection between the gearbox and operating rod. Holes and connecting bolt worn that caused excess movement. I made some replacement parts but don't remember the details now.

It's annoying but is a simple rod adjustment. Workshop manual has the instructions. Loosen off the nut with the gear shift in neutral. Jiggle the rod into what you think is neutral and tighten up. Might take a couple of guesses to get right. I had the problem where it would go into reverse with the engine off but not when running. Just persevere!

You guys were right, it was the linkage, but not what I expected. It tuned out to be not the adjustment of the linkage near the trans, but rather the linkage related to the Shifter in the car, somehow when you push down on the Shifter, it didn't rotate the linkage rod enough. I pushed very hard on it and it went into reverse! Maybe the Shifter itself is worn. I figured out the problem by viewing how reverse engages when moving the lever. In the good car, when pushing down the rod rotated more than in the problem car.

So how do I fix this? Replace the Shifter? Or is there some bushing or linkage at the base of it to recondition? Haven't pulled it apart yet..

Just wanted to give an update on this. I fixed the issue, but it wasn't the shifter either. When you put these cars in reverse, you push down on the stick and pull back into the reverse gate. The issue is with the pushing down part, what happens is that the shift rod "rotates". In the case of my car, it wasn't rotating enough. It is a very subtle thing, but what I did to fix it was add a washer under the (left) shifter bolt in the car (one of the 3) to make the shifter take a slightly different angle to make the rotation go a little more when pushing down. Perhaps the mount was fatigued or bent or maybe the transmission linkage is just worn inside the tranny, so more rotation is needed to make it engage. I could have also modfied the linkage near the trans to add a spacer to force more rotation, but doing it at the shifter base in the car worked.

nice clean and original coupe! i also like the dark blue 1100..i guess very few of those are in the US
F

Nice troubleshooting! I'd have pulled the engine and trans first thing and then....

Thanks. The 1100 is actually black, a 1959. (the one in my avatar is not my car, I wish). Love the old sedans and plan to do some mods to the 1100 to make it more sporty, mainly lowering it, but not easy with leaf springs in the back.
You must log in or register to reply here.
Share:
Facebook Twitter Reddit Pinterest Tumblr WhatsApp Email Link
Top