Mike,
Harbor freight dollies?How hard is it to move the car around? Nice exhaust!!

lanciahf said:
Mike,
Harbor freight dollies?How hard is it to move the car around? Nice exhaust!!
Click to expand...

Thanks. The car came with the exhaust. It's an Ansa box, with the standard toilet bowl and single Downpipe. I have an Allison's header and Magnaflow exhaust, that I acquired on my trip to see Hussein, that I may use instead.
As for the dollies:
It's not terribly difficult to move the car, using these cheap wooden "jawns" (isn't that what you Jersey and Philly folks say?) The small dollies from HF are rated for 750- 1000 lbs per and cost around $10 each. The carry capacity is more then enough per corner for an X1/9 and the wheels fit nicely onto them. That being said, they do creak and pop and sound awful, when first lowering the car down onto them. They hold together and work, so...
I'm not sure if I'd use them on rough surfaces though, since the wheels are kinda small.
Last edited: Nov 24, 2019

Eastep said:
The small dollies from HF
Click to expand...

We were talking about these HF dollys recently in another thread. I have a whole bunch of them for various uses. One of the best uses for me is to stack large storage boxes on top, making them easy to move about my very limited storage space (I just leave the stacks of boxes on them). However I'm surprised they are holding up with the entire car on them. I have found these dollys don't like to be heavily loaded. The wheels do not have bearings, only a skinny metal shaft (pin) that the solid rubber wheel spins directly on. So with too much weight on them the centers of the wheels get 'wallowed out', and/or the axles bend, and/or the bearings for the pivoting (turning) action fall out, etc, making them very difficult to roll. Especially when trying to change directions; one wheel won't follow the others. Also the nuts/screws that mount the wheels and hold the frames together tend to be loose when new, and get even looser with use. So before putting them into action it is worth a minute to add some loctite and tighten them down (but be careful, they strip easily). I've disassembled a couple of them to modify for other uses (turned a couple into fitted engine/trans dollys). The wood frames are low quality as you'd expect, hince the cracking and creaking. But for the money (like under $8 with a coupon) they are great.

Agreed with the above statement, Jeff. I do recall putting a wrench on them JIC. I didn't pay much attention to the wheels and axle pins, but I suspect your correct. The car does change direction fairly well, when sat atop the dollies. I don't see these as much more then what I'm using them for. I mostly just use them to angle the car with the arrow confines of the shop.

I've thought about anchoring my tall jack stands onto four dollies so I can move it around while the car is under restoration (mostly a bare shell). However I admit I had not considered using these dollies, I was thinking about the metal ones with the curved bottom for use like you are doing. The problem is those curved bottoms makes it harder to mount the jack stands on them. So these HF ones may be better for that. Although I'm concerned it may be to "tipsy" combining tall stands with dollies.

I have the curved bottom dollies and have put jack stands on them but they are unstable and have had a few try to escape when slowly moving the car.
Even if you use flat dollies and attach the jackstands to the dollies be cautious as the stands aren't properly "attached" to the car and will wander.

carl said:
Even if you use flat dollies and attach the jackstands to the dollies be cautious as the stands aren't properly "attached" to the car and will wander.
Click to expand...

Exactly my concern, and why I haven't tried it.

On a related note, I am surprised how stable the cars currently are sitting up really high on jack stands. The stands I'm using each have the normal 4 leg base, and the cars are just resting on top of them, so nothing special. But several times I've been doing work that I thought could have easily knocked the car off the stands (car slide off or the stands tip over). But they seem very solid. Still does not mean I'm eager to push it around on dollies like that.

Thought about making a "cart" to put the cars on. Something with suitable wheels and wide enough base to be stable. However I want to retain full access to all four sides from underneath the car (e.g. be able to roll under on a creeper). So the design would get more involved and I'm not that motivated. The one shown below bolts to the car's chassis to stabilize it without the need for braces between the bottoms of the four corner posts. But then access to the suspension and other mechanical components might be obstructed by the braces need toward the tops of those posts. And I'm not sure that the X has suitable locations for mounting such a design. 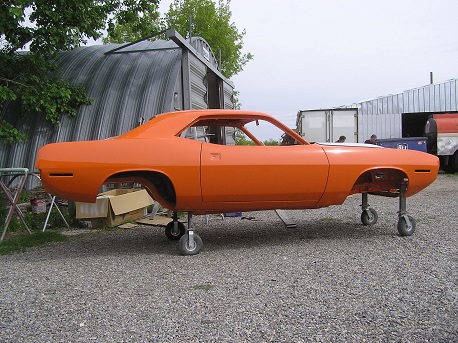 Now you've got my attention! So is there a story attached to that car?

MikeHynes said:
So is there a story attached to that car?
Click to expand...

Sorry, you'd have to ask whomever posted the pic on the internet. I just copied it as an example of the wheeled cart it is sitting on.

On the dolly tangent, I am a big fan of the type that ratchets up/down to lift the wheels off the floor. I don’t think I’d ever want to get under a car that was supported by 4 independent rolling stands, but for moving a car around and NOT having to jack it up a few time to put it on its skates, the way-more-than-$10 price seems worth it more & more each day.

I have seen a few TV programs where the car being restored has the wheels sitting on what look like wheel supports made by 2x4s stacked in a square. They are not on wheels and I don't know how they got the car high enough for the wheels to sit on these supports but I always find them intriguing.

Fiataccompli said:
I am a big fan of the type that ratchets up/down to lift the wheels off the floor.
Click to expand...

Several years ago I bought a set of four of those from Harbour Freight. I did not need them at that particular time but they were on sale so I just left them in the box and stored it for later. A few months after I decided to use them. Dug out the box to discover the cardboard was saturated in oil. Opening it I found all the hydraulic seals had gone bad just sitting and all the fluid seeped out. Pushed the box back in the corner and have never looked at it since. I've had very poor luck with any hydraulic operated equipment from HF, the seals always go bad after the warranty is up. Now I see they sell them with mechanical jacking mechanisms rather than hydraulic, so I guess I wasn't the only one to get screwed. Someday I'll take them to a hydraulic repair shop and see if they can be rebuilt. But I have a feeling that will cost more than the jacks did (which were not cheap by the way).

I have three HF jacks, two aluminum and one very heavy steel with a two foot lift and have never had any issues with any of them.

I have some HF hydraulics that have been fine. My self-lifting skates are the mechanical type. A friend who had both types (HF or ???) recommended the mechanical type. They were not what would call cheap, even buying one at a time using a 20% discount over a period of time, but in a way cost is relatively insignificant with shop tools that prove to be extremely useful.

carl said:
I have three HF jacks, two aluminum and one very heavy steel with a two foot lift and have never had any issues with any of them.
Click to expand...

Lets see - off the top of my head, I've had all of the following HF equipment experience failed hydraulics; at least four of the aluminum floor jacks, one large steel floor jack (a second is semi failed, it doesn't hold pressure for long and the car starts sinking), a bottle jack, a motorcycle lift, a engine hoist (cherry picker), those rolling wheel jacks we are discussing, a "jaws of life" type ram thing, and a truck bed hoist. I'm sure there have been others that I'm forgetting (I've tried to forget all of them). In a couple of cases they were still under the basic warranty and the store replaced them. Some of those replacements have also failed (so the total of actual failures is greater than the list of components). I managed to replace the hydraulic portion of a couple others by modifying them to accept better parts from other sources, so the equipment was salvaged. But most of them went into the trash.

Why I keep buying their hydraulic stuff is the real question; isn't that the definition of insanity, to keep doing something expecting a different outcome? Although my HF hydraulic press is still working after a few years, and the second engine hoist has been good for about the same length of time, so it might be hit and miss on the quality. I suspect the climate here is also a factor, but some of those failures happened while I was still living in SoCal.

I'd definitely go for the mechanical type wheel jacks.

11-29-19
Today a buddy of mine came over to lend a hand with getting some patch templates made. Our plan was to install the new floor pans, but it seems like alot of effort, that I just didn't want to exert, for the time being. We did make templates and panels for the sill and spare tire well. Please be advised that I fully intend to blame the Harbor Freight flux core welder for what follows next 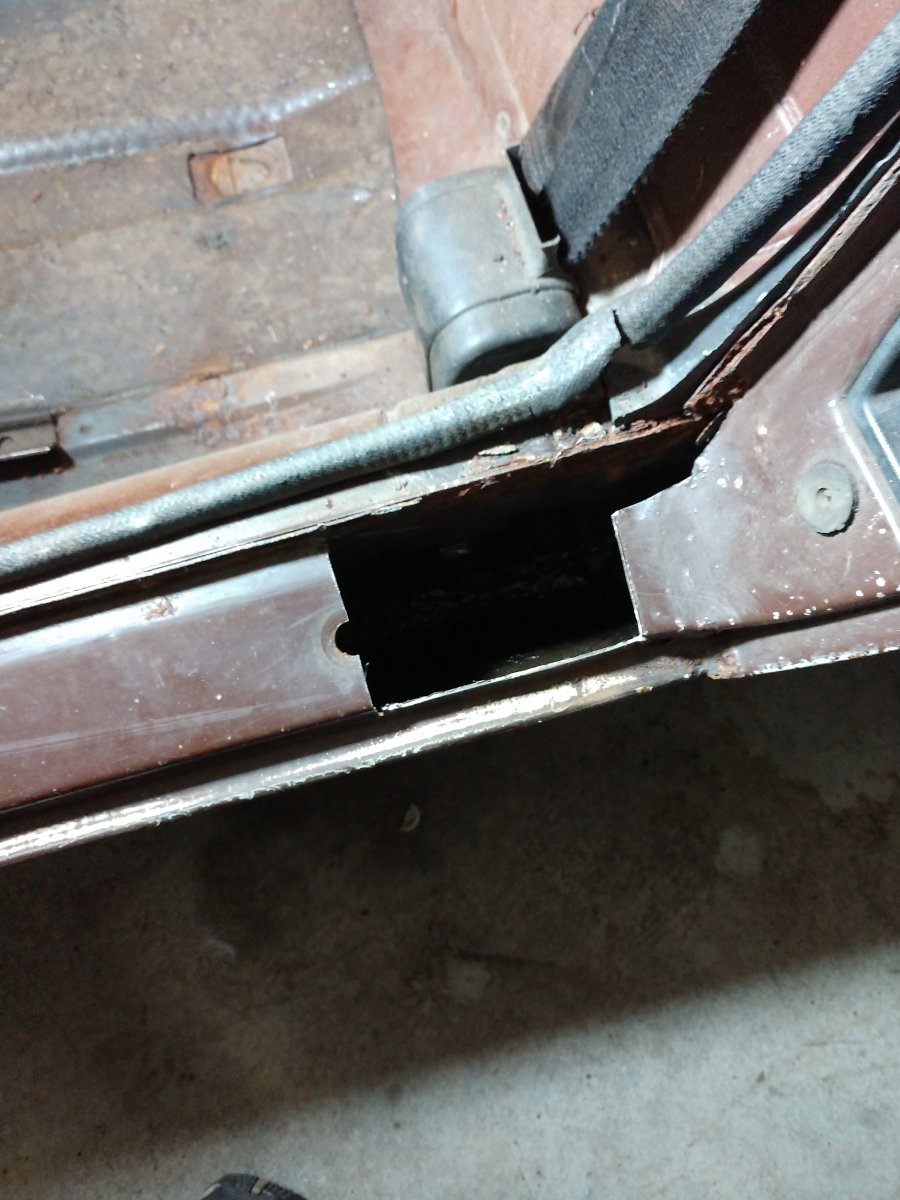 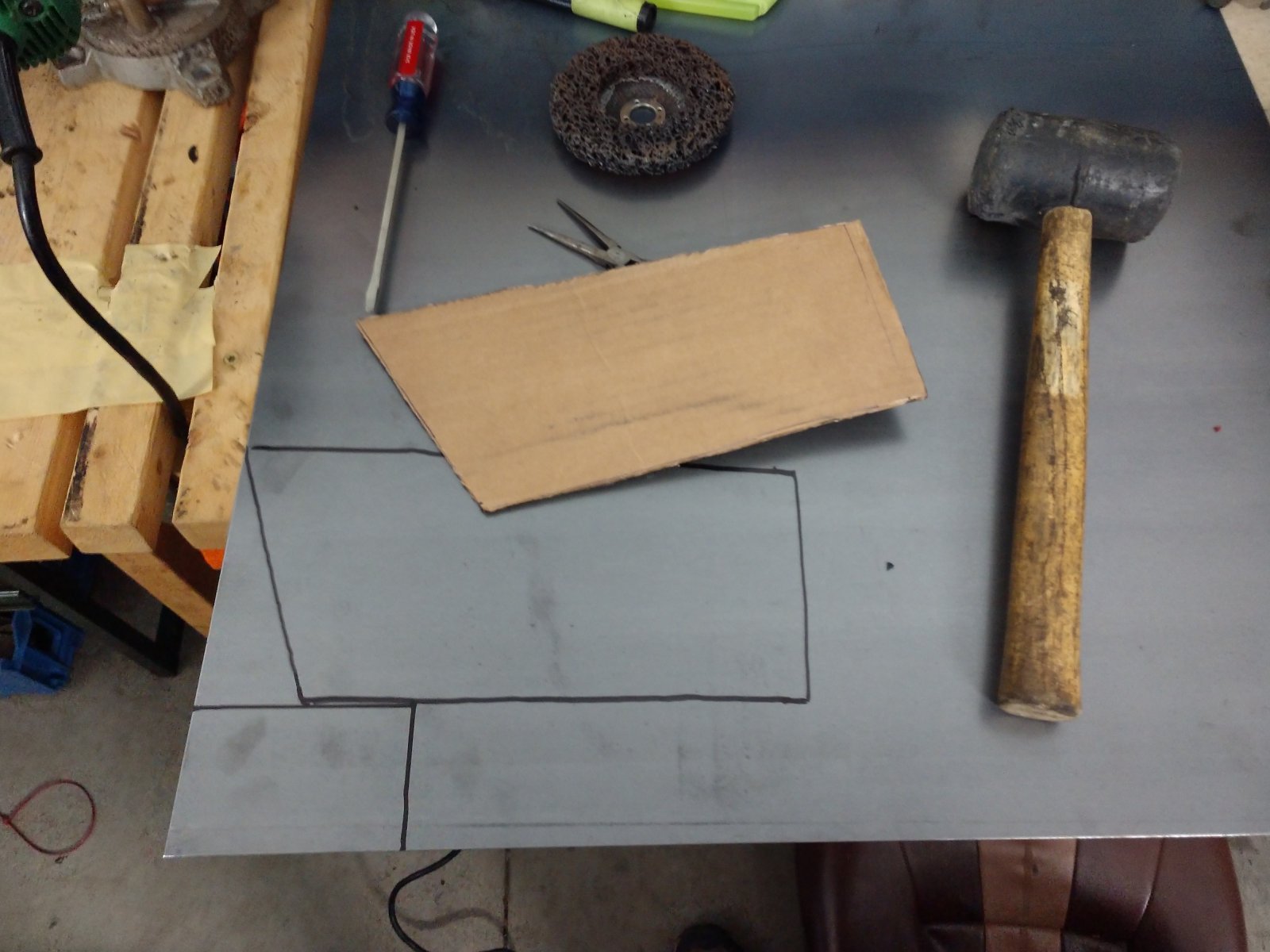 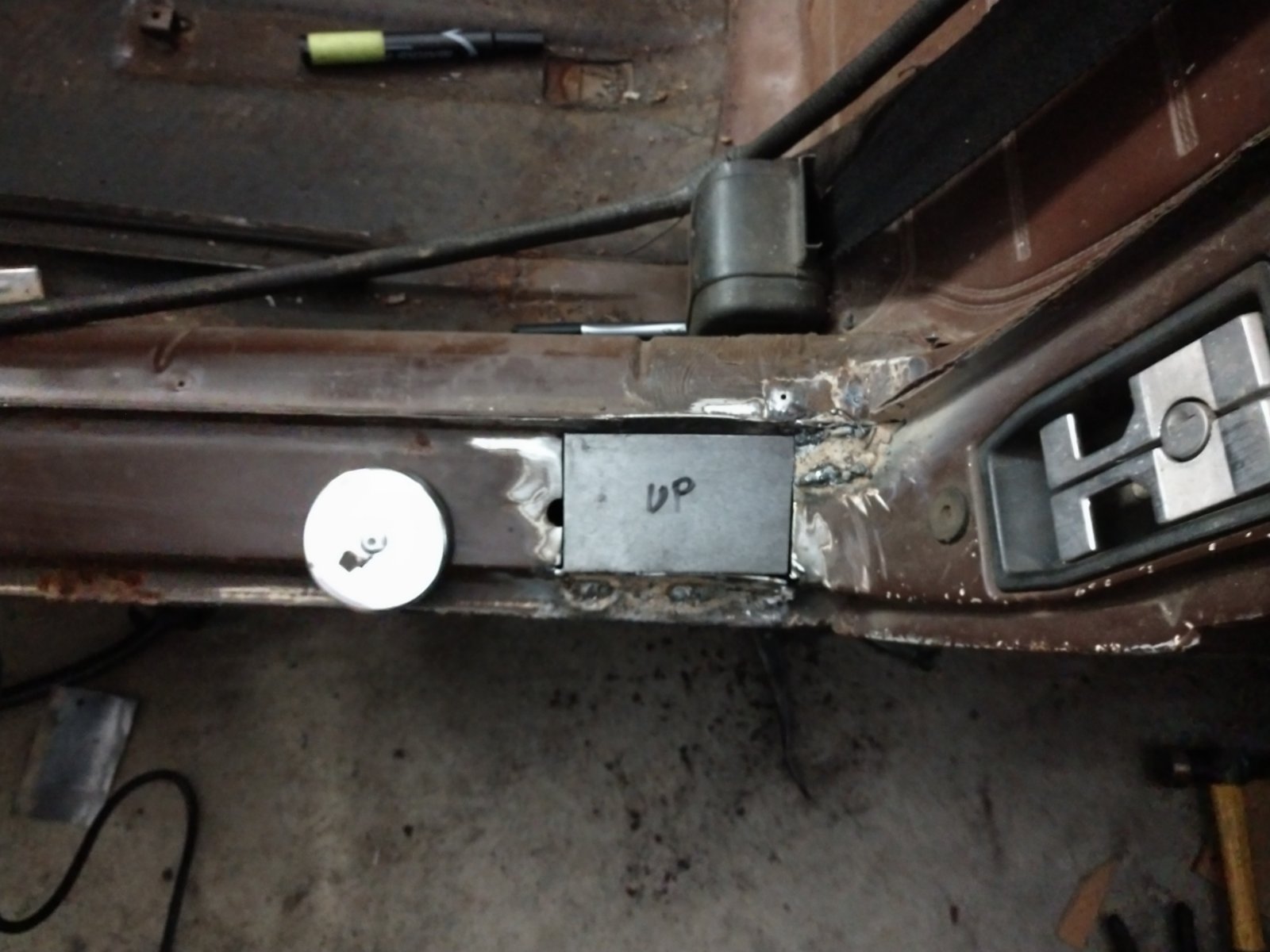 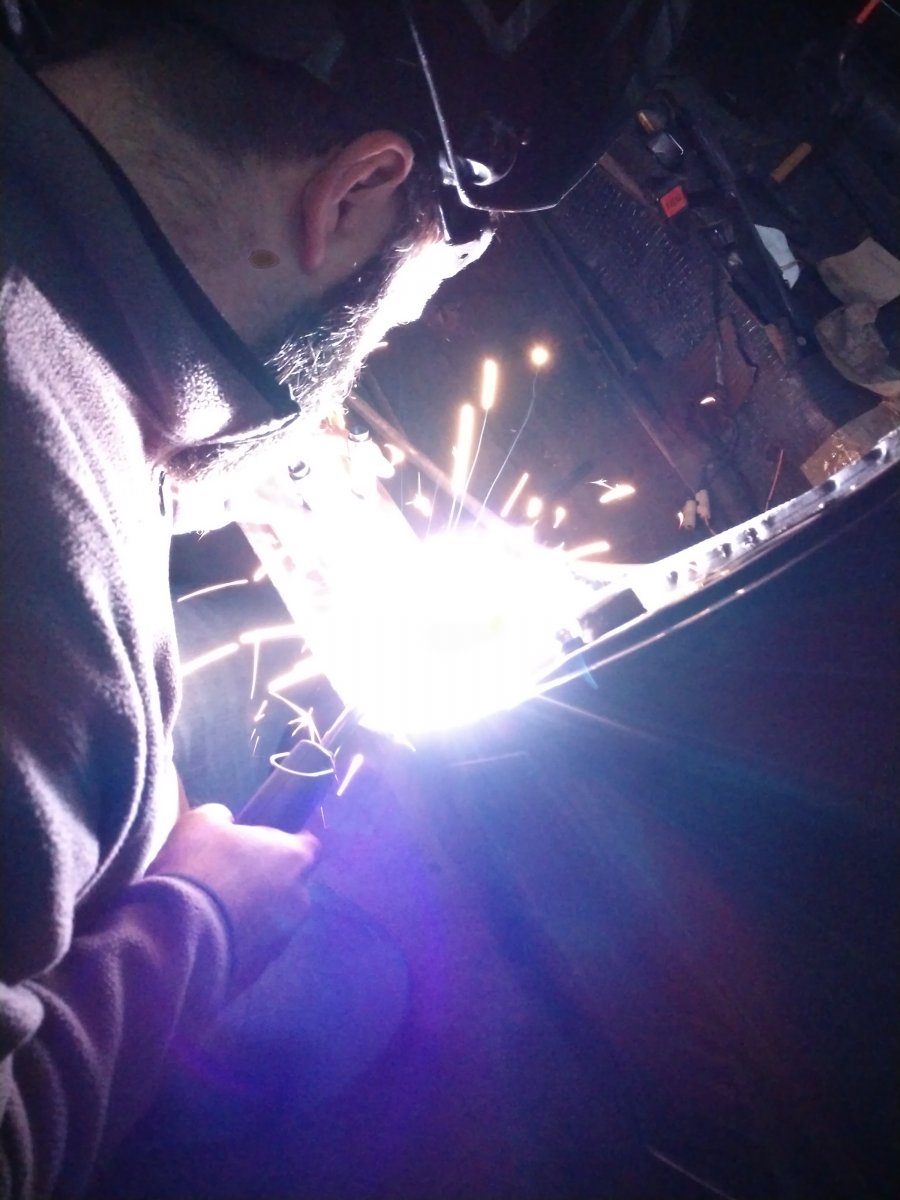 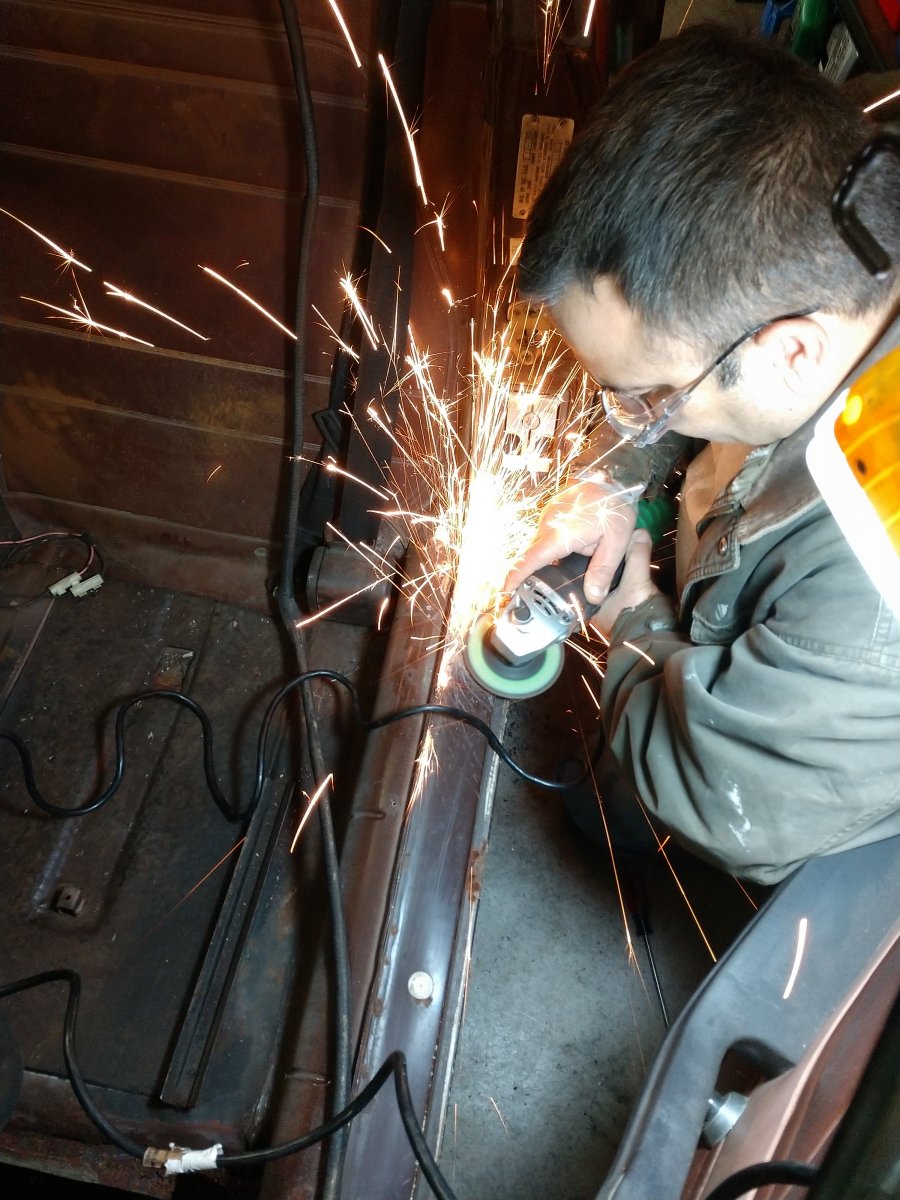 why welder has helmet on the head but welding without it?

And why does the grinder has the power cord in the path of the wheel?

Perhaps the same reasons I do those things.

and why does someone buy a Fiat with rusted out sills...just kidding.
Someone needs to make a nice video on how us amateurs should properly weld nice new metal onto crappy Fiat metal. My welding looks just as wonderful as yours...when I'm not blowing holes through the joint.

mkmini said:
why welder has helmet on the head but welding without it?
Click to expand...

Because I was making a tack-weld.

Dr.Jeff said:
And why does the grinder has the power cord in the path of the wheel?
Click to expand...