It looks like you not only removed the wiper motor, but also part of the wall in front of it (between the frunk and vent box)? That gives a lot more room for the reservoirs.

That is a little scary.

I intend to put my large brake reservoir in the pocket there by the strut mount and the other in the corner where it won’t interfere with the wiper mechanism in the scuttle.

Cutting that out is pretty extreme, but it is the PhatRat after all.

That wall was cut out because it was so rusty that there was pretty much nothing there. The rust was all the way down to the mutlilap welded section (you can see where I had ground away some paint) So the wall had to come out anyway. Since I love tinkering, figured I would relocate the reservoirs there and at a later date I can always move them back to the stock location and fab a new wall (or go back to the rat and cut out the same section to weld in. May also cut out the trunk latch cable guide since it has no function now although I'll leave a bit of a stub to keep rain water off my feet.

An update. The motor and trans are in, and all the ancillaries are hooked up. Nothing exciting as this is just the entire drive train from the X installed here. 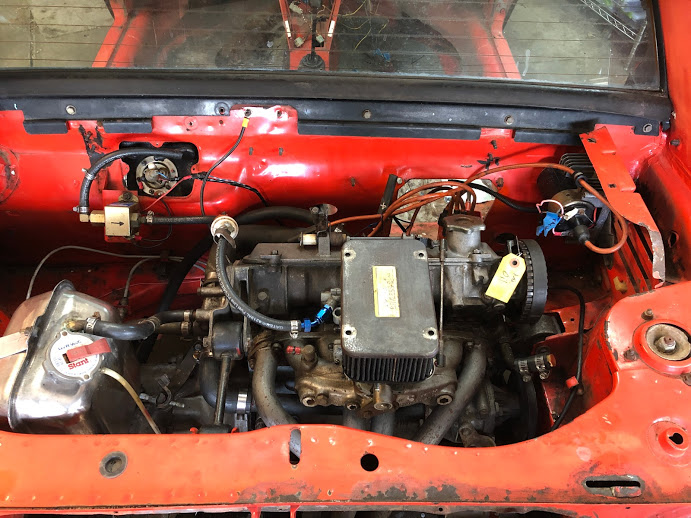 I put water in the cooling system to ensure there were not leaks...easier to clean up water than antifreeze. I did get a leak but it was just a loose hose clamp at the radiator hose. Installed the exhaust today. 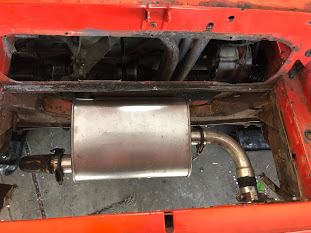 Just the same set up I had on the rat. Finished up the wiring and hit the starter switch and the motor turned over. Sadly the rest of the electrical system, which runs through the fuse box was not functioning so tomorrow I'll sort that.
Put oil/filter in the motor and bought three quarts of MTL only to find out the gearbox with Redline in it was not empty as I thought so now I have three bottles of MTL I can put on the shelf. In theory, once I find why the fuse box is dead and pour gas in the tank I can fire it up. Next major job is to bleed the brakes and clutch. By the way, the cone shaped copper washer I installed between the clutch MC and hard line seems to actually work and that joint is not leaking like it was on initial hookup. The true test will be if it holds line pressure.

Waiting for Vics to tell me the coilovers are ready for distribution, I'm on the waiting list. Then I can bolt on the doors, seat and seatbelts and in theory I can drive it...with red spoiler, doors, front hood and rear trunk cover on an orange/black car with primer flares....in other words a typical carl Fiat.

Electrical issue solved and with that done and some gas in the gas tank, the engine fired up, I set the timing and I now have an alive X.
Now on to the hydraulics....yuck.

I attacked that issue yesterday so I think I'm either done or 80% done. I did learn that the reservoir caps for Fiat reservoirs and BMW conversion brake reservoirs have different threads and my pressure bleeder cap doesn't fit tight on the BMW reservoir....so it splatters a bit!

This car is now legally on the road. Couple of cans of Rustoleum red got the car mostly one color. 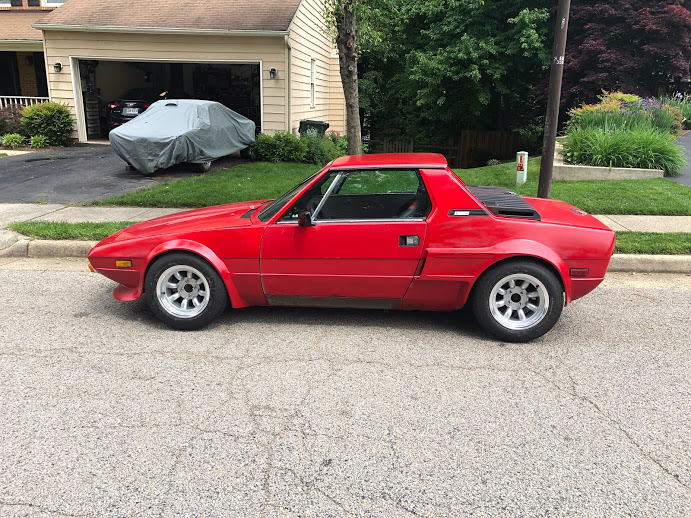 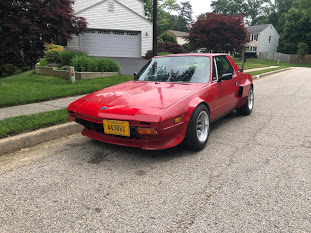 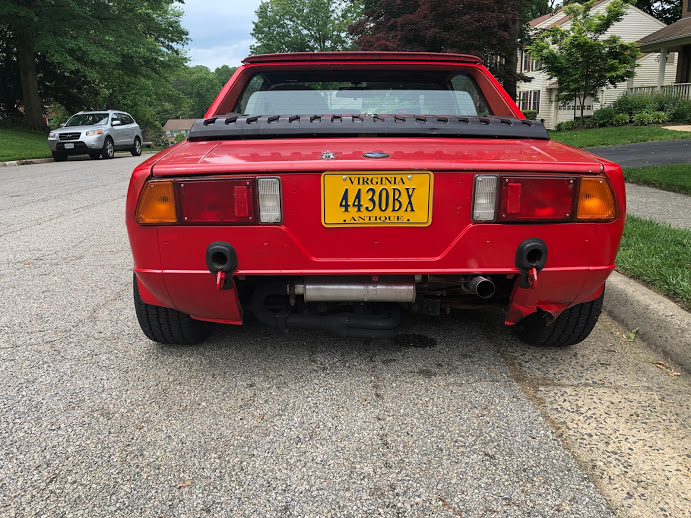 These are just teaser pics. The paint looks terrible but it was just a quicky shoot. Been driving it around and everything seems OK. I have an oil leak and the suspension is stiff but getting a tad looser with miles. Still lots of cosmetic issues and the passenger floor needs patching but I have no qualms driving it around now. I have been working pretty much every day since early January on the car and could use a work break....Maybe I'll start in on the spider which is waiting patiently under the cover.

Stylistically I would have preferred the flares to have retained the "bolt on" look and I would have painted them a contrasting black. But the previous owner actually did a pretty nice job of molding them into the body so I'm kind of forced to paint them to match the body color since there is no clear break between the flare edge and the body.

That is the best looking shitty car I have seen in a long while.

Congrats on making it roadable and a good 50/50

Carl, that looks really good. I'm not so sure you can call it a "rat" anymore. Congrats on getting it driving again.

Personally I prefer the molded-in flares with body color paint. Makes it look more like having been designed that way from the start.

Speaking from my own experiences, if you step away from this one for awhile to work on the Spider, then this one will get get finished. But I do it all the time.

See my newer post, the motor died. But she looks real nice in front of the house! Plenty of time to fix the rusted out seat mounting area on the passenger floor.