JTBernhardt said:
Here are a few shots of my 1986 X1/9 done by a friend of mine who does photography and cinematography professionally.

With all due respect to everyone else...JT, that is the most fantastic looking X1/9 I have ever seen.
Click to expand...

Moderator
I took some pictures of the repainted 85 this morning. It is still a work in progress, but it looks a lot better. It was in primer when I bought it in 2013. I was supposed to get it painted 2 years ago as a 30th anniversary present. Finally got it painted in June. It originally had the grey/black seats, but I blacked out the interior with new seat covers and some vinyl/fabric paint for the door cards. 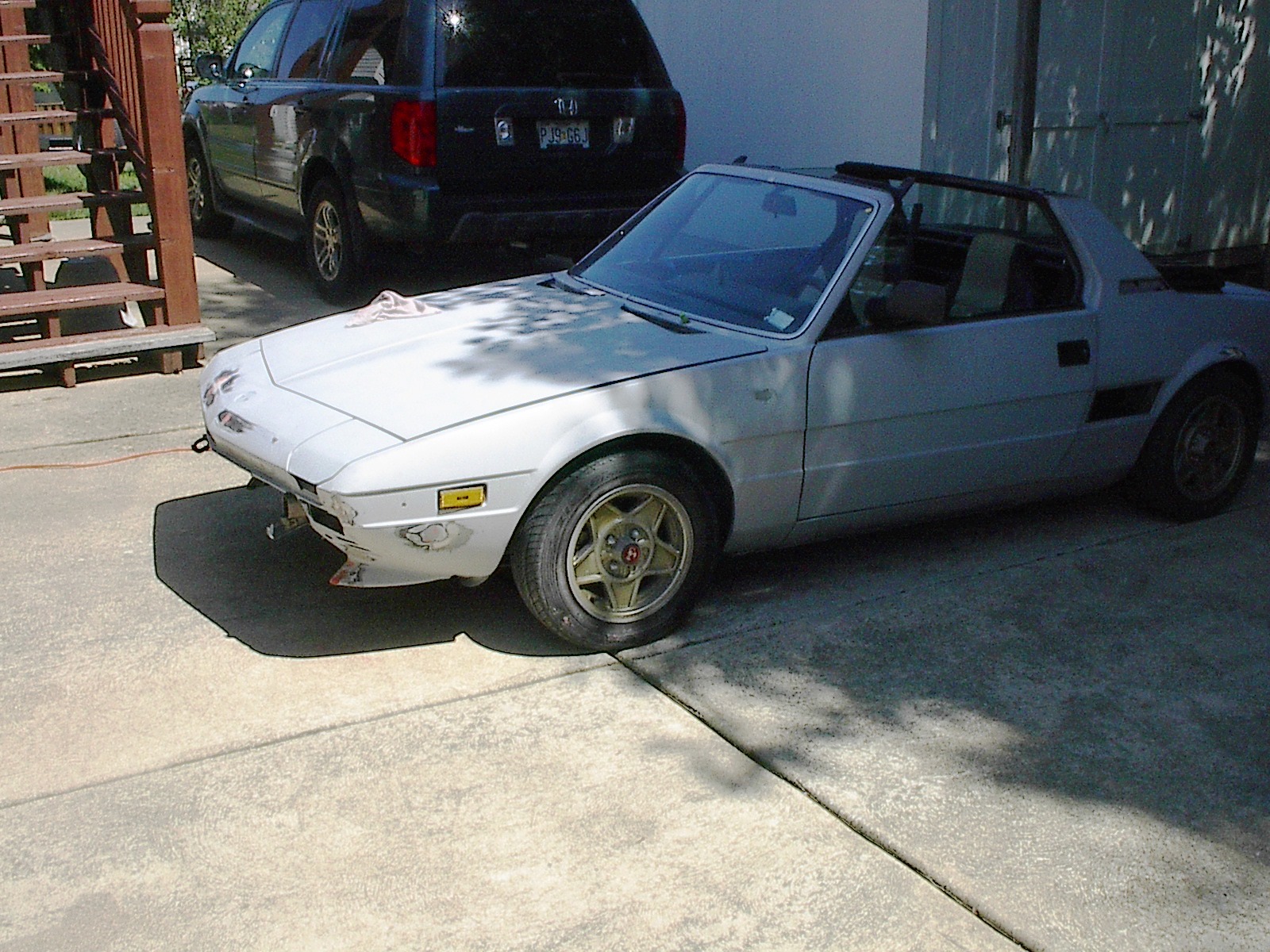 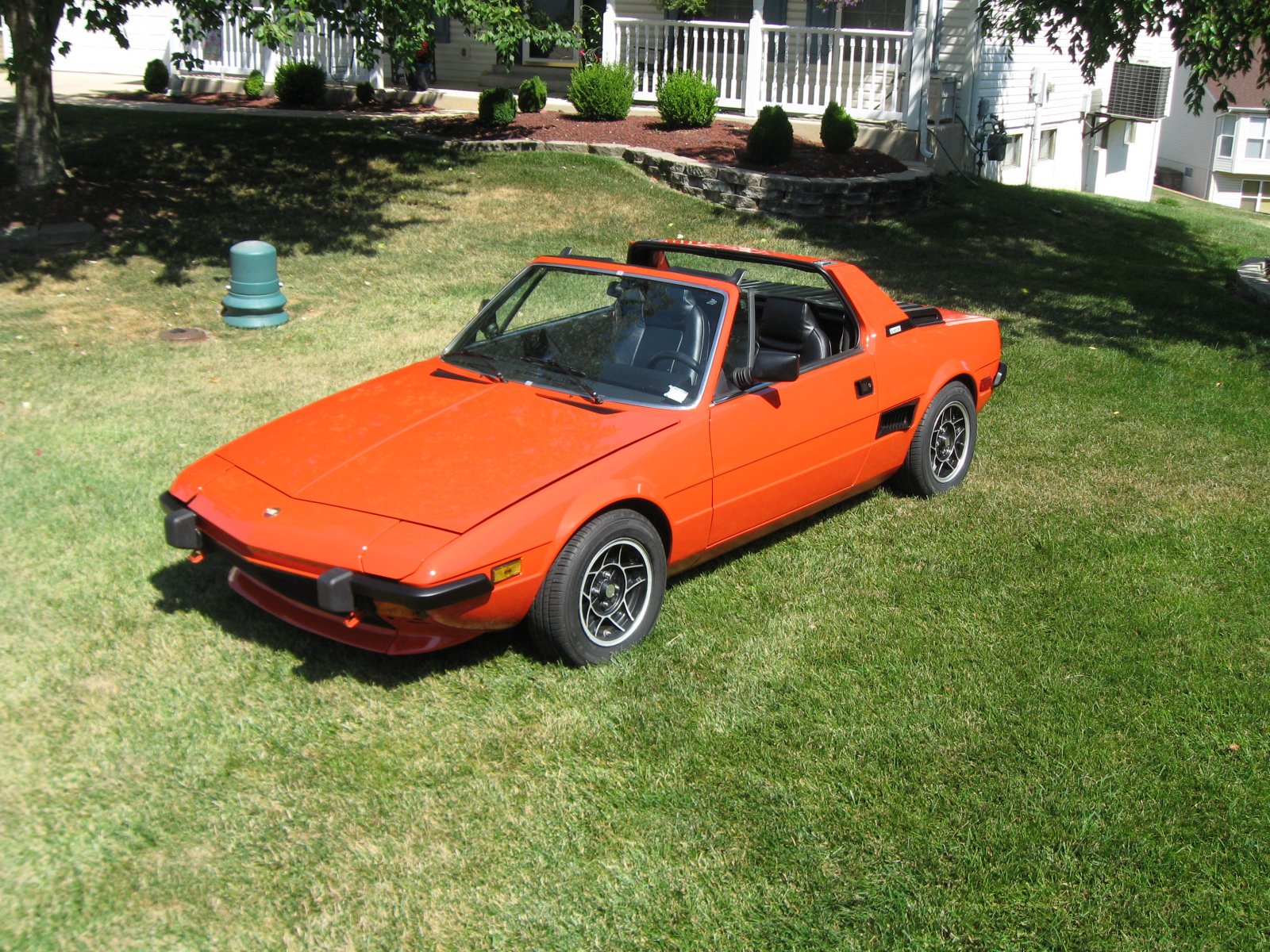 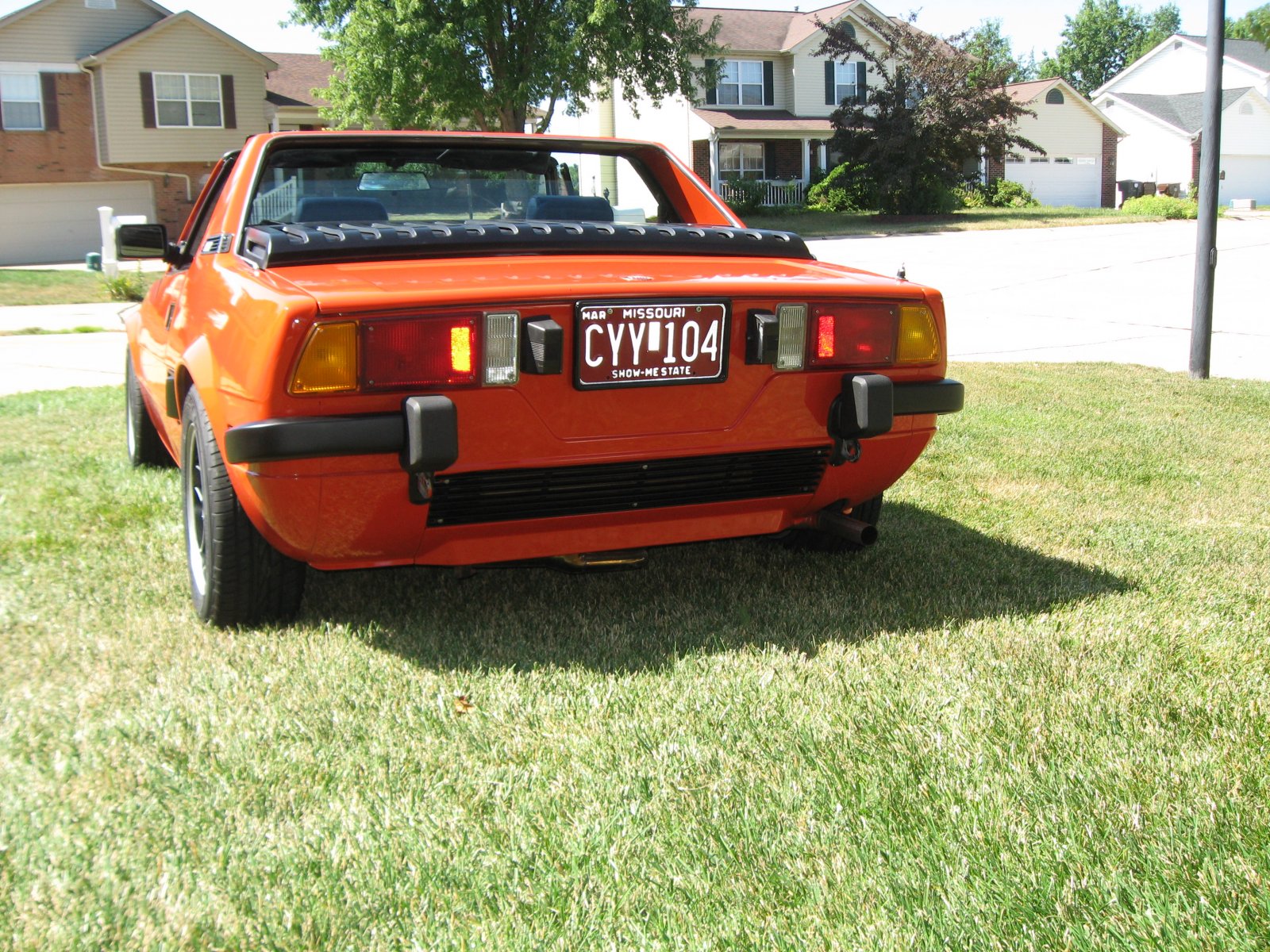 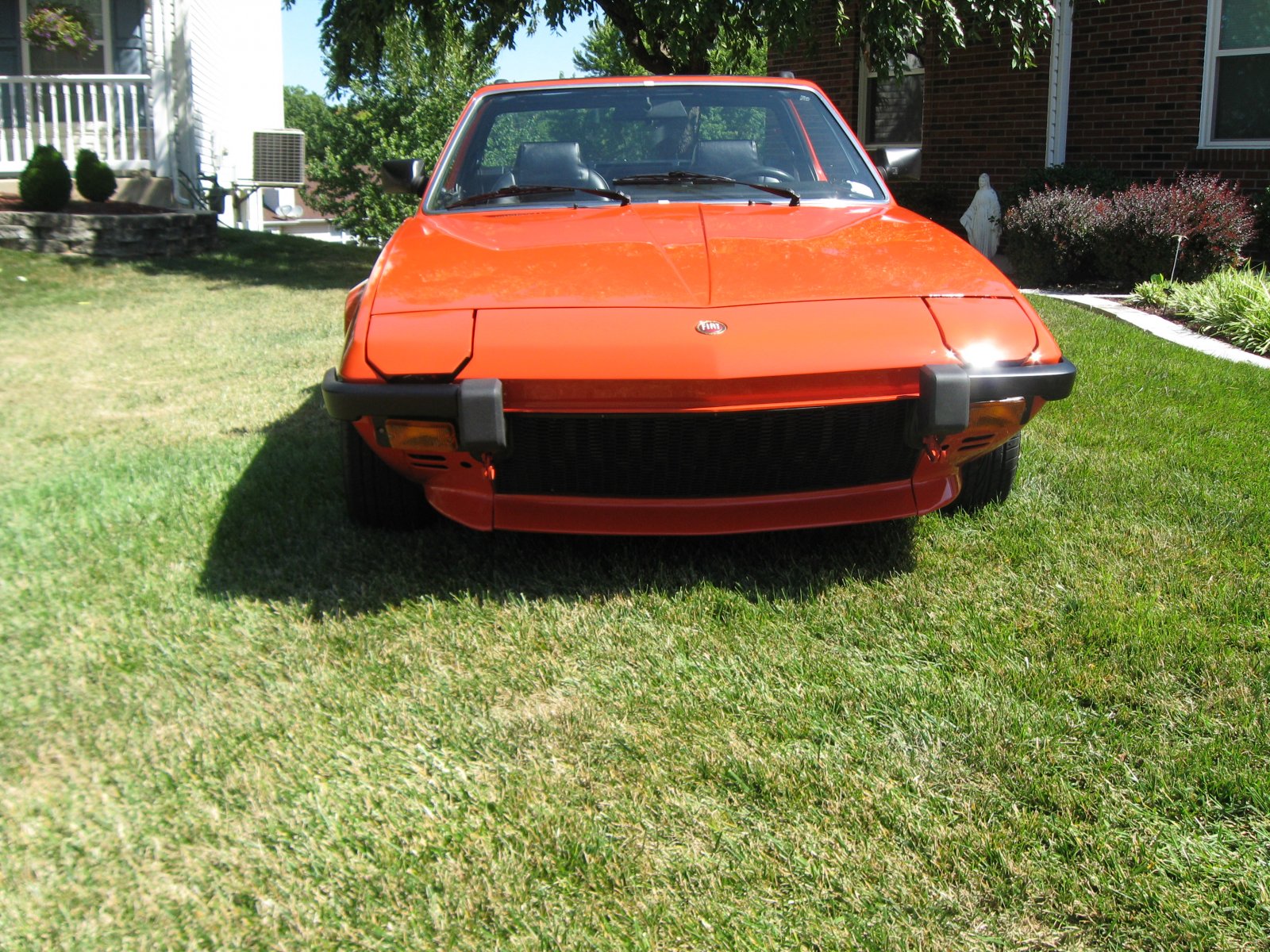 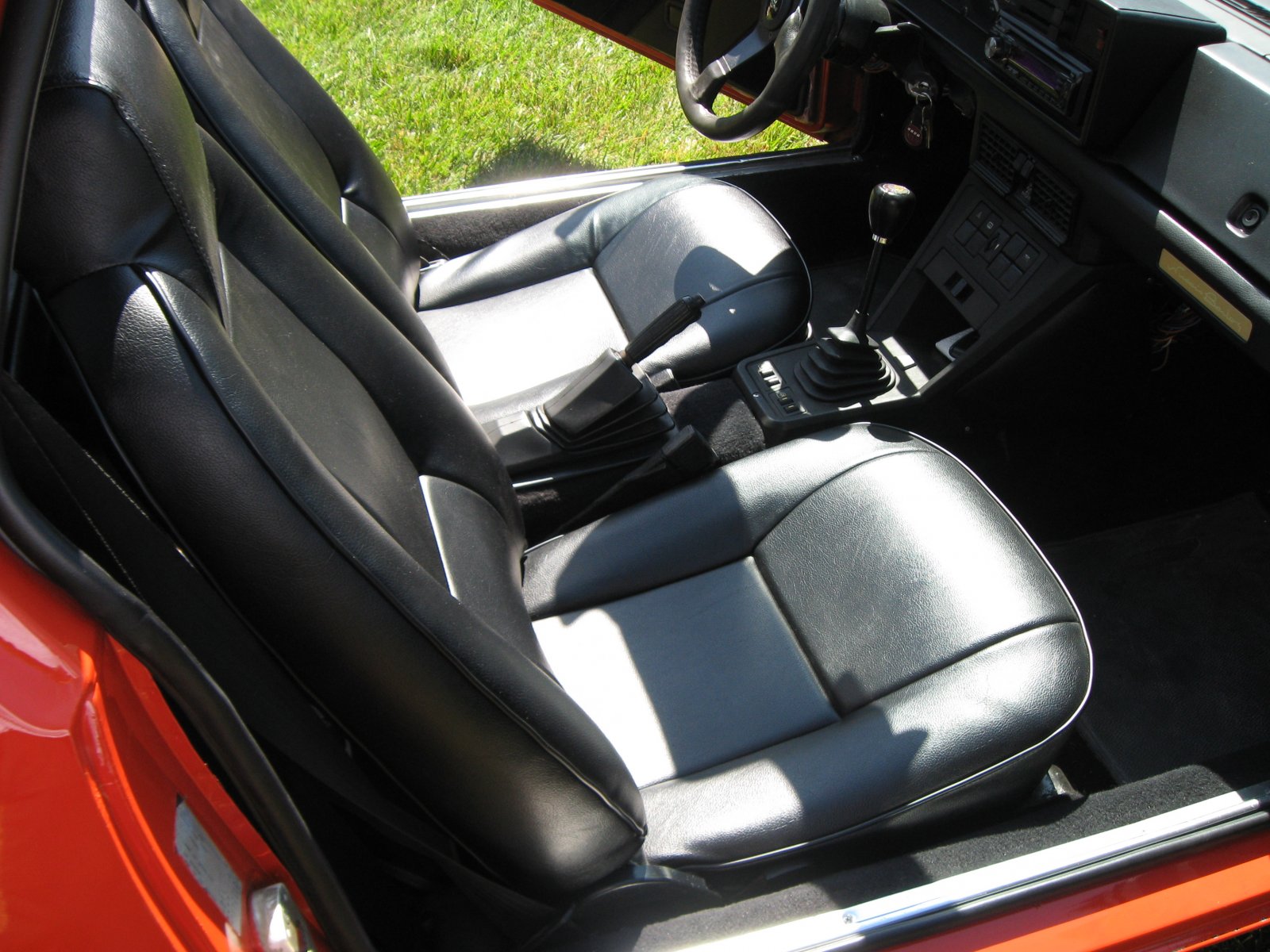 Wow! The repaint makes the Cromodora wheels look like ATS!

Finally took the X out for a drive after 3-4 weeks without movement, and take clear pictures of it.

First real drive after fixing the turn signals and grille to place. 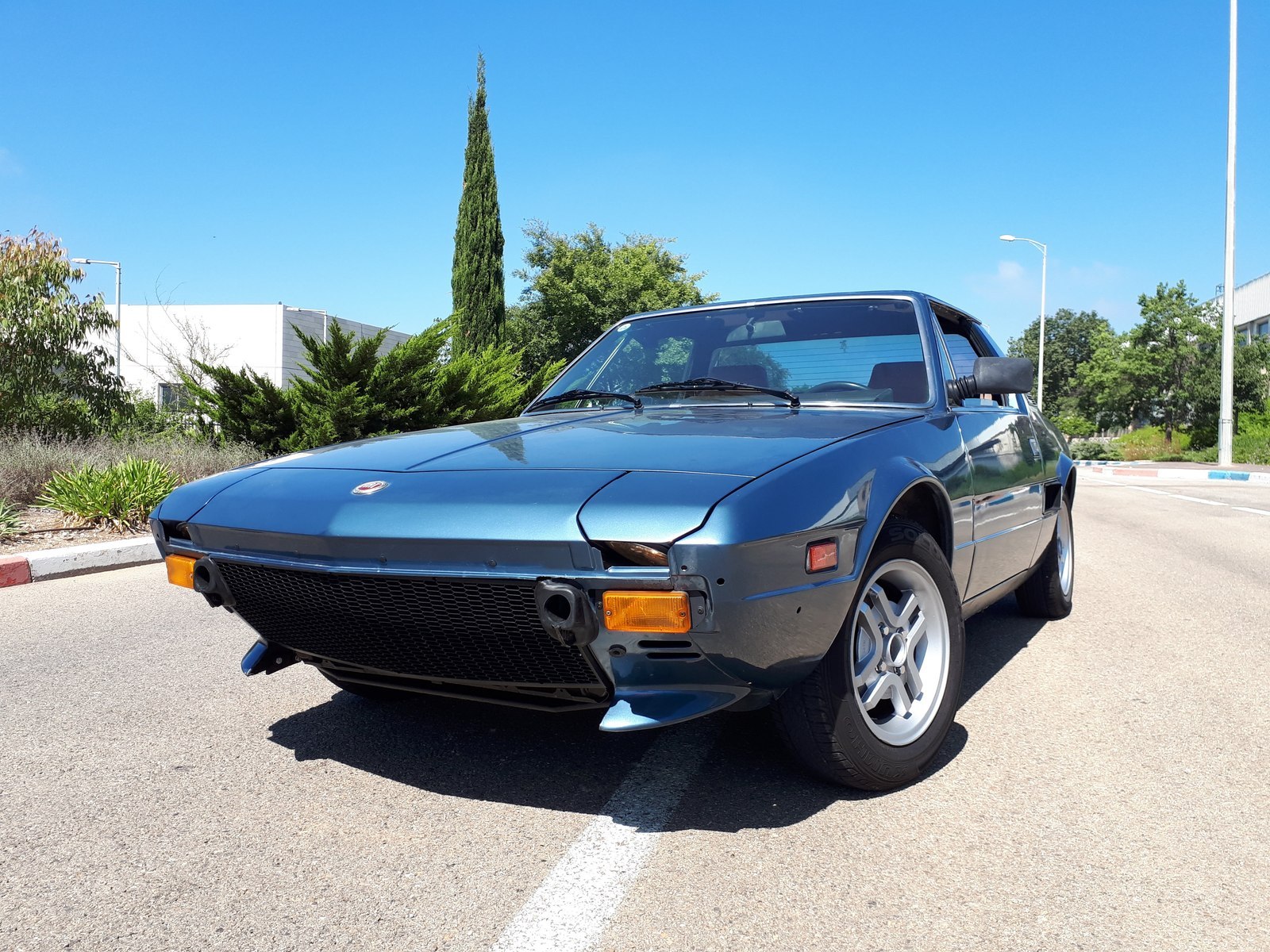 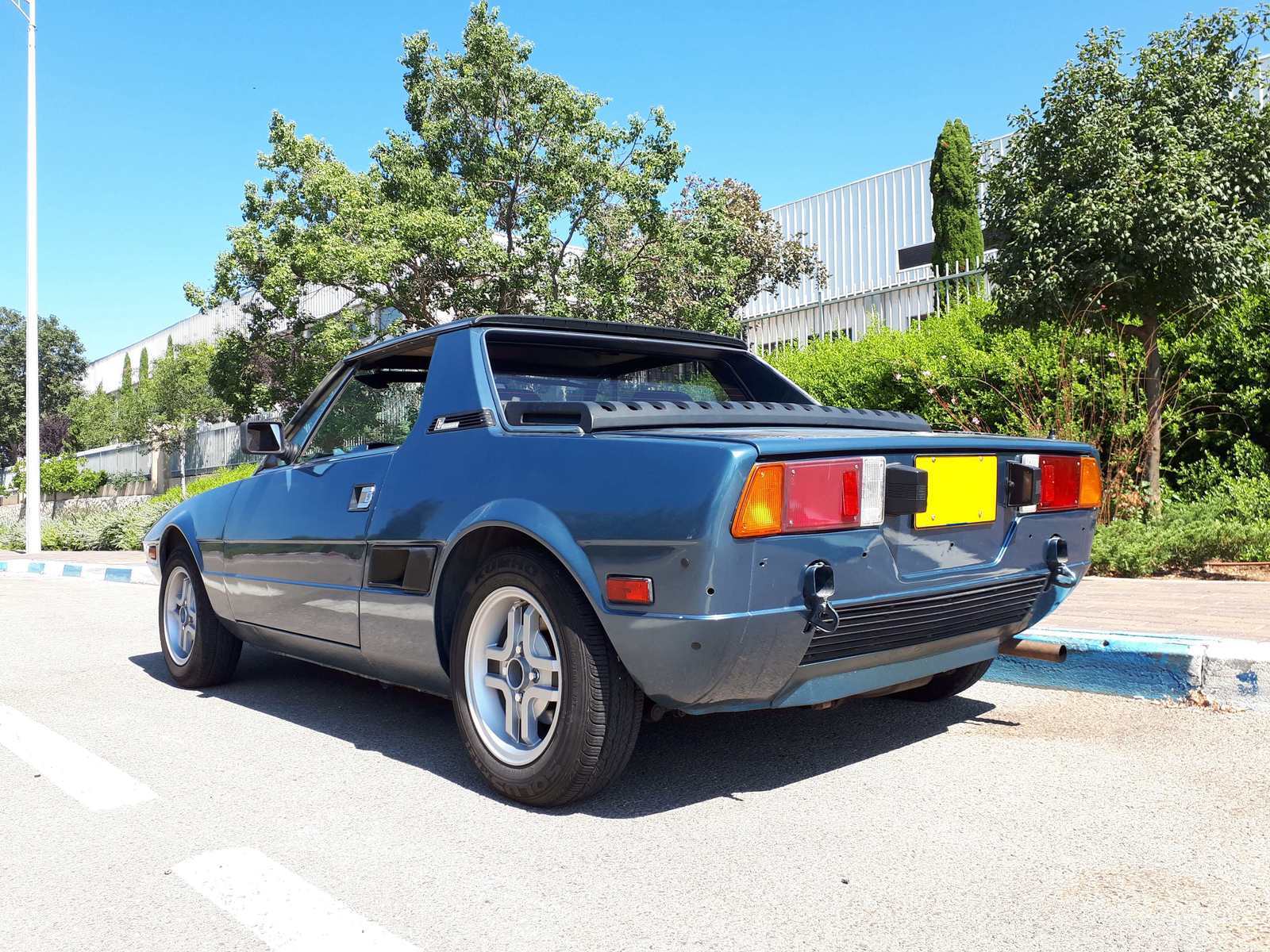 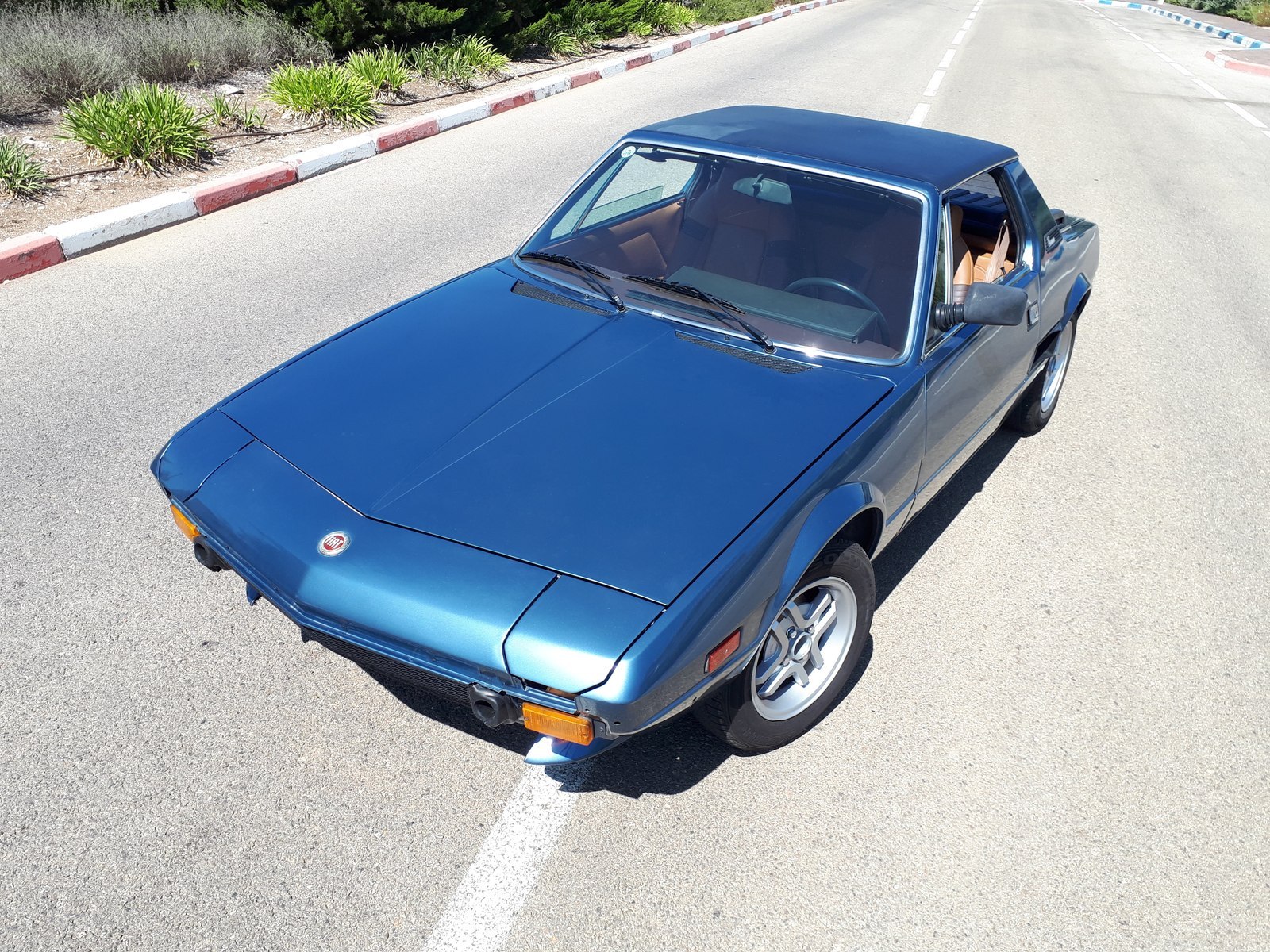 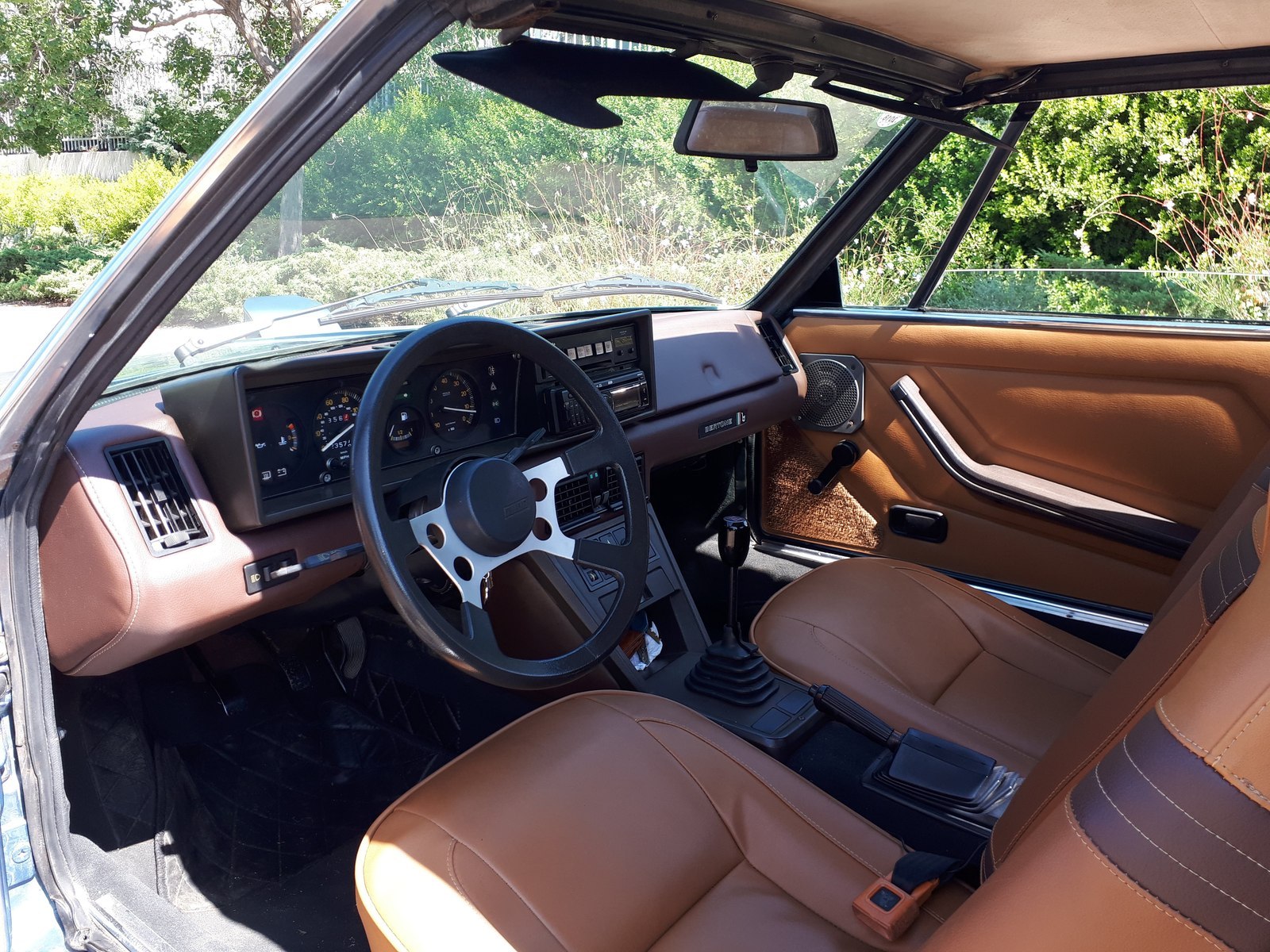 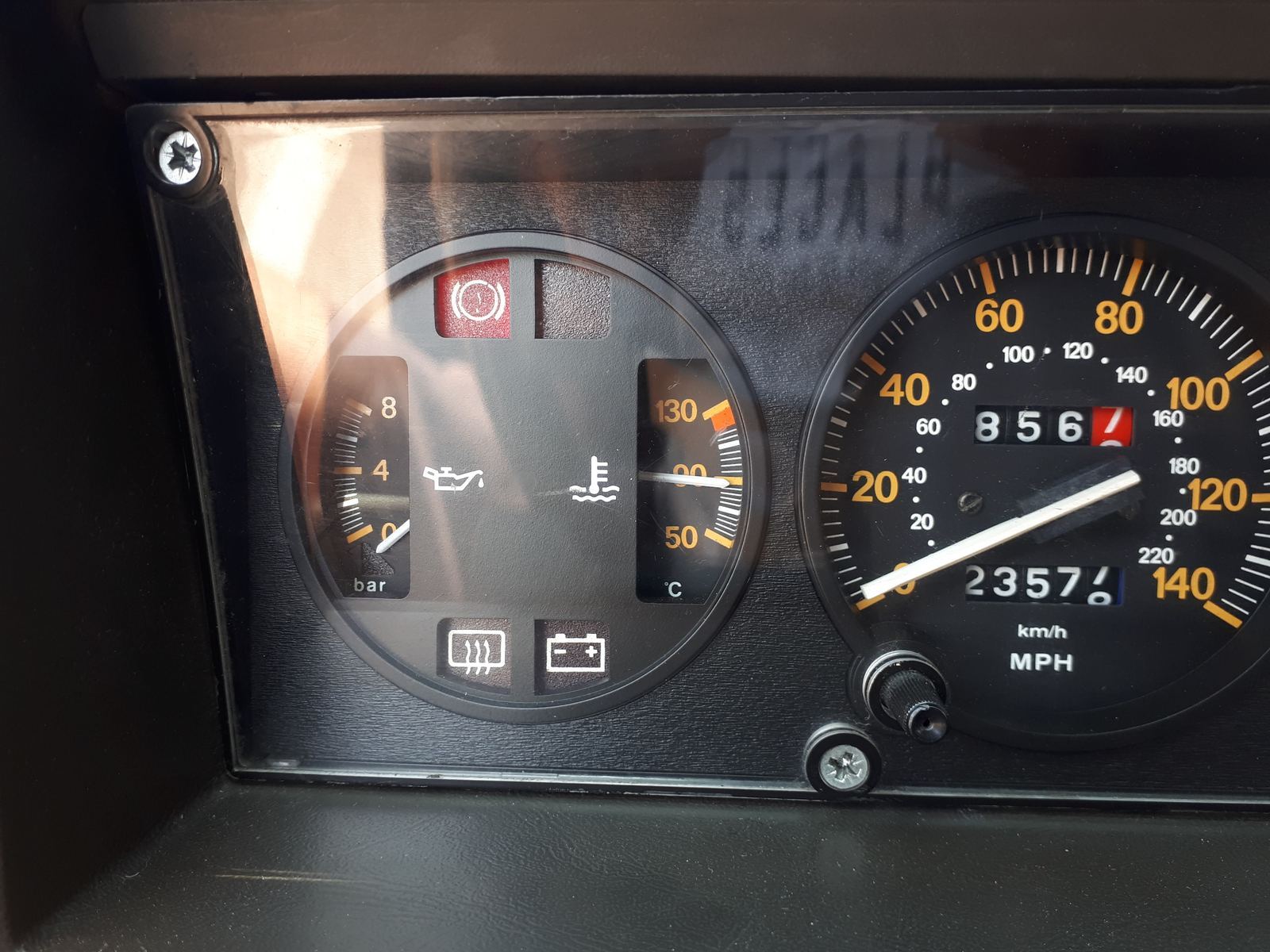 I kinda like those 2 fenders edges pointing out, but on the other hand it looks unfinished.
Will update on this area ideas in a separate thread.
D

Two Bertone creations side by side. 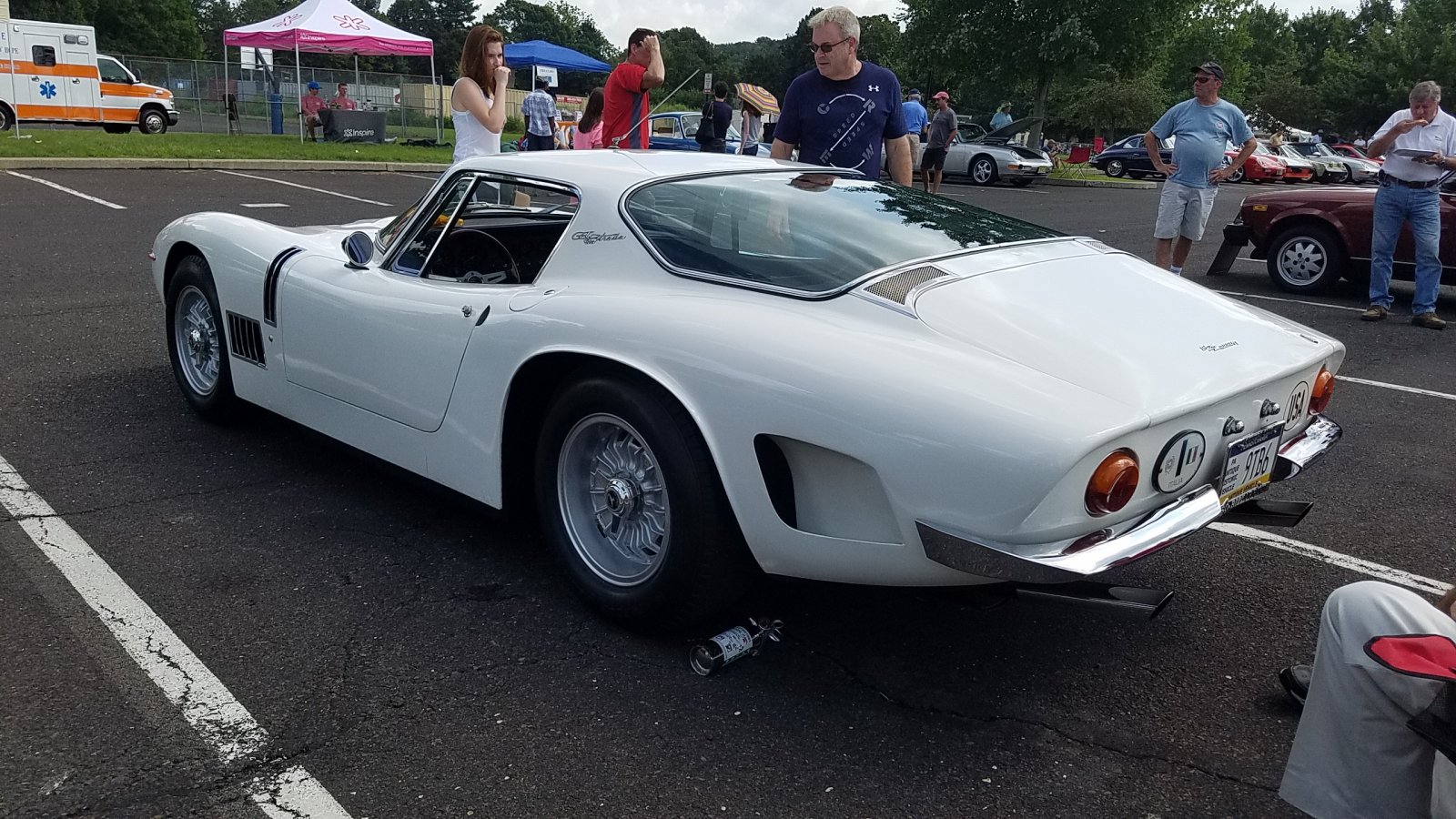 Design in the sixties was a wild and wonderful thing. Put that next to the Carabo and you would be like there has to be 20 years between them. Nice contrast of your car to his. Rare item that Bizzarini. 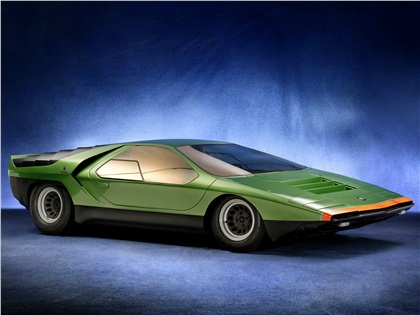 One of the first things I am going to do when I get my car running is take it down Gratiot in Detroit and do a lot of graffiti photo shoots. Corktown will be my next destination, but that's a little farther away requiring a little bit more reliability. Then again both are in not-so-good parts of town, making reliability a must.

Moderator
I went out and took a fall photo of the X today. 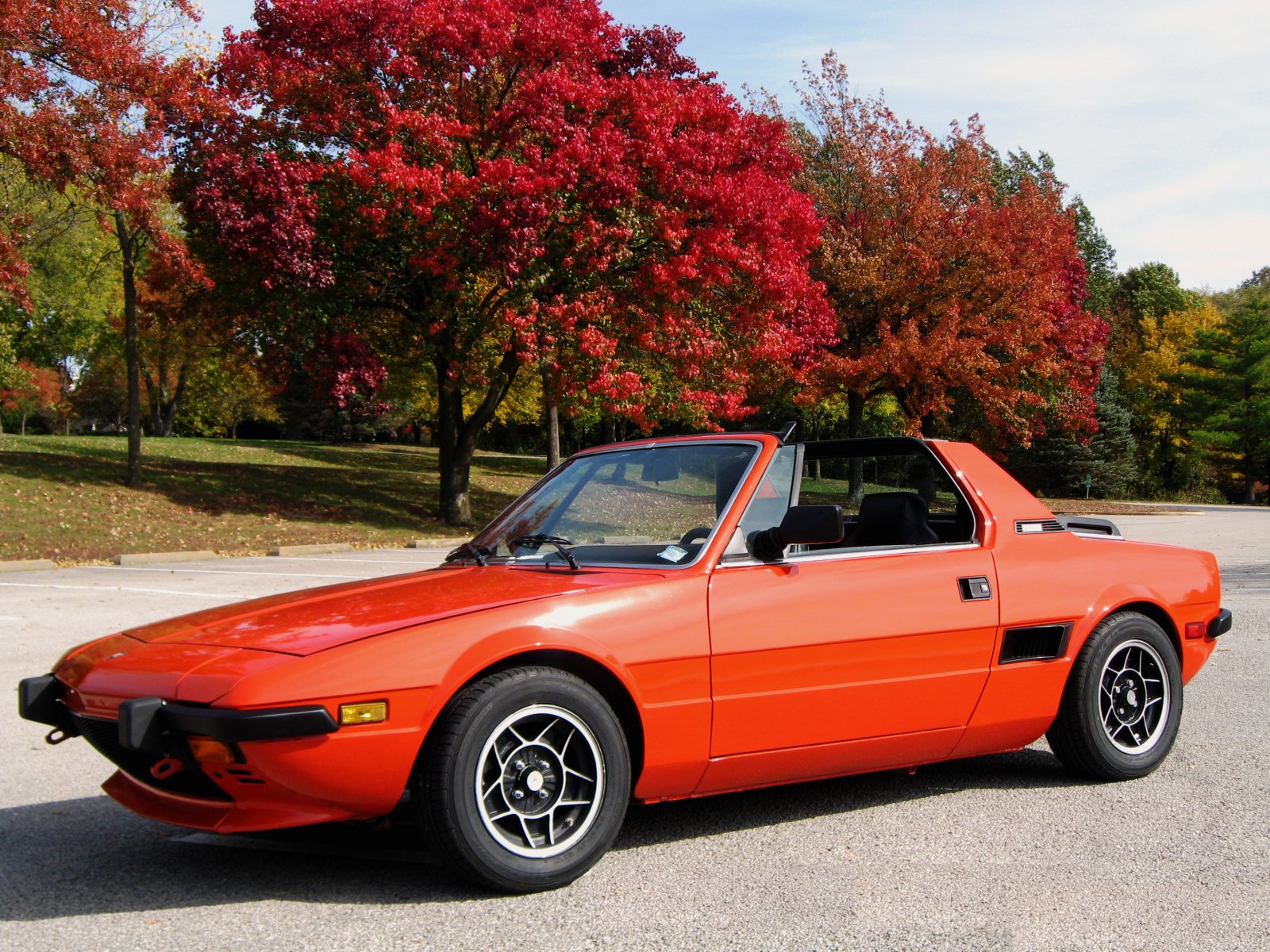 Here's my lil girl Pascale on the day that I bought her a couple months ago. All stock one owner owned since 1986. She's going to get some winter solstice slight modifications (badges from Ricardo and rims and tires from Rodger). 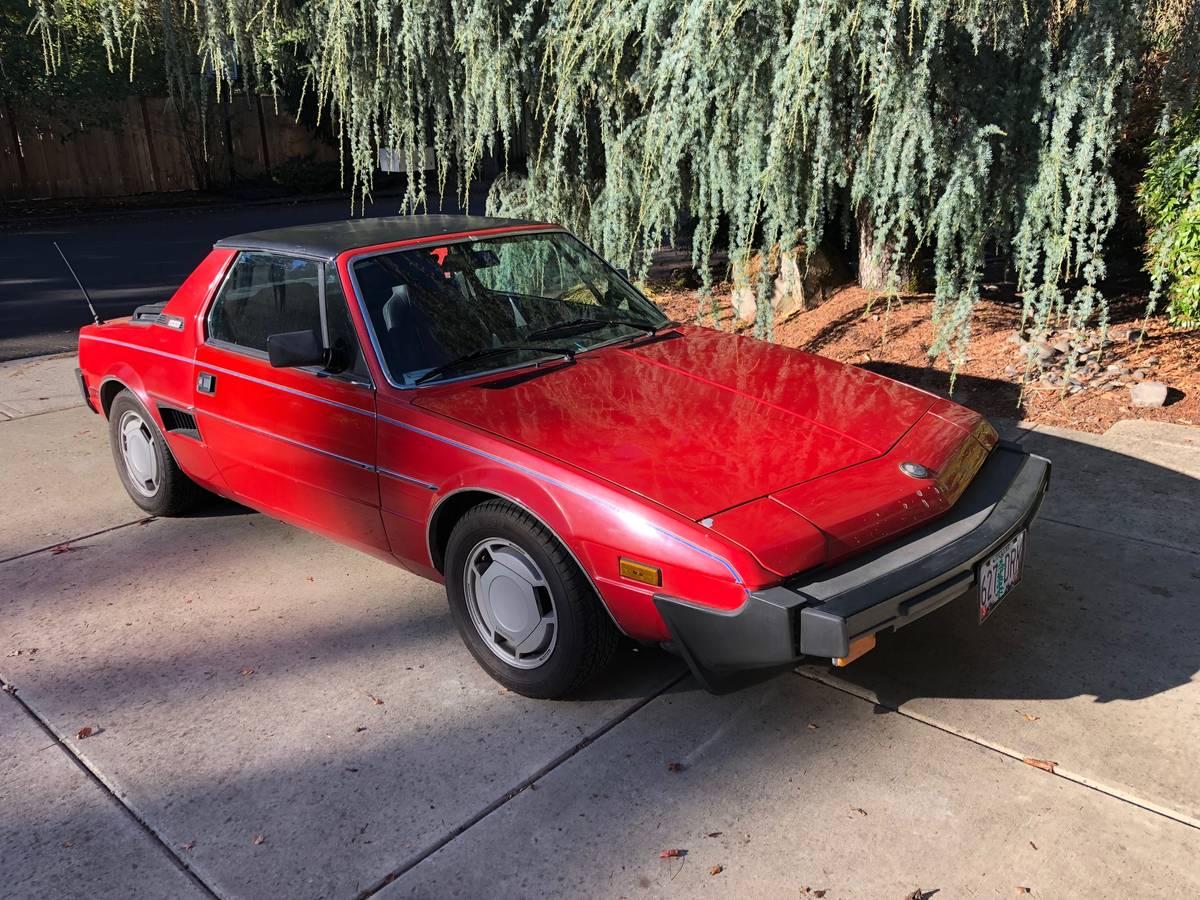 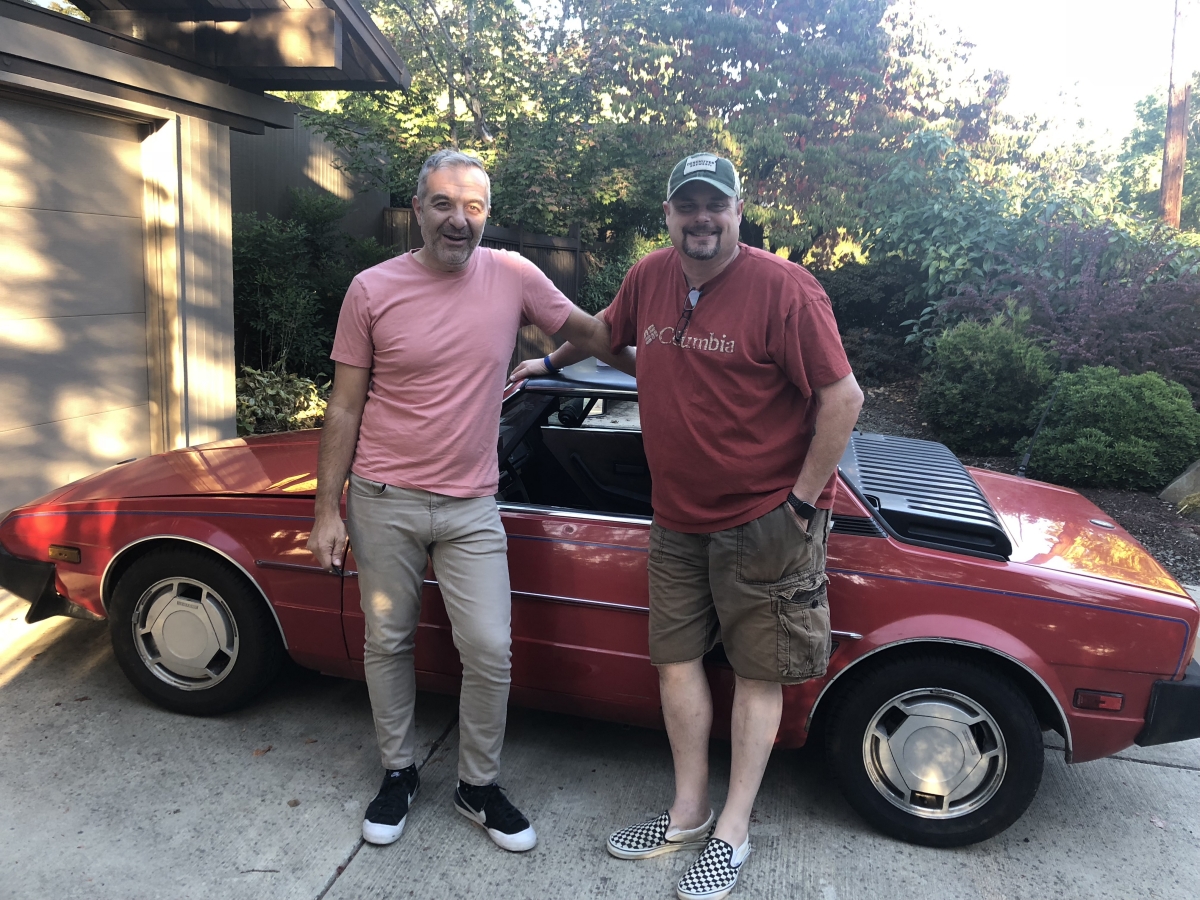 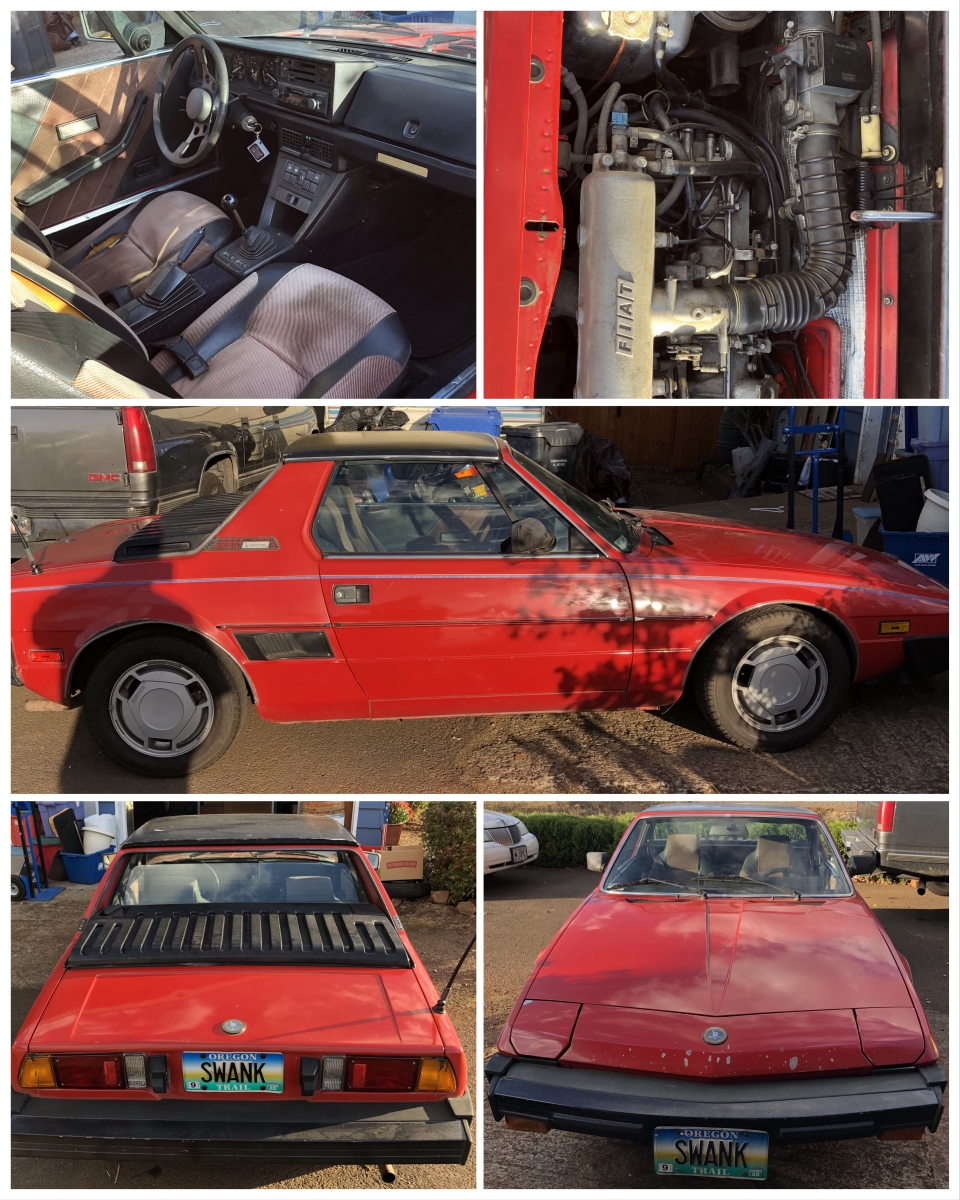 Went to the Freedoms Foundation Car Show in Valley Forge, PA, last weekend (Nov 10, 2018). They had a photographer set up to take "red carpet" photos of each car as it came into the show. George W. and his horse seemed not to notice all the fuss. It was sunny but cold and windy so I had the top in place to and from. Even though they parked me under a tree, I took it off for the show and when I got home I could have used a leaf blower to get all the leaves out! 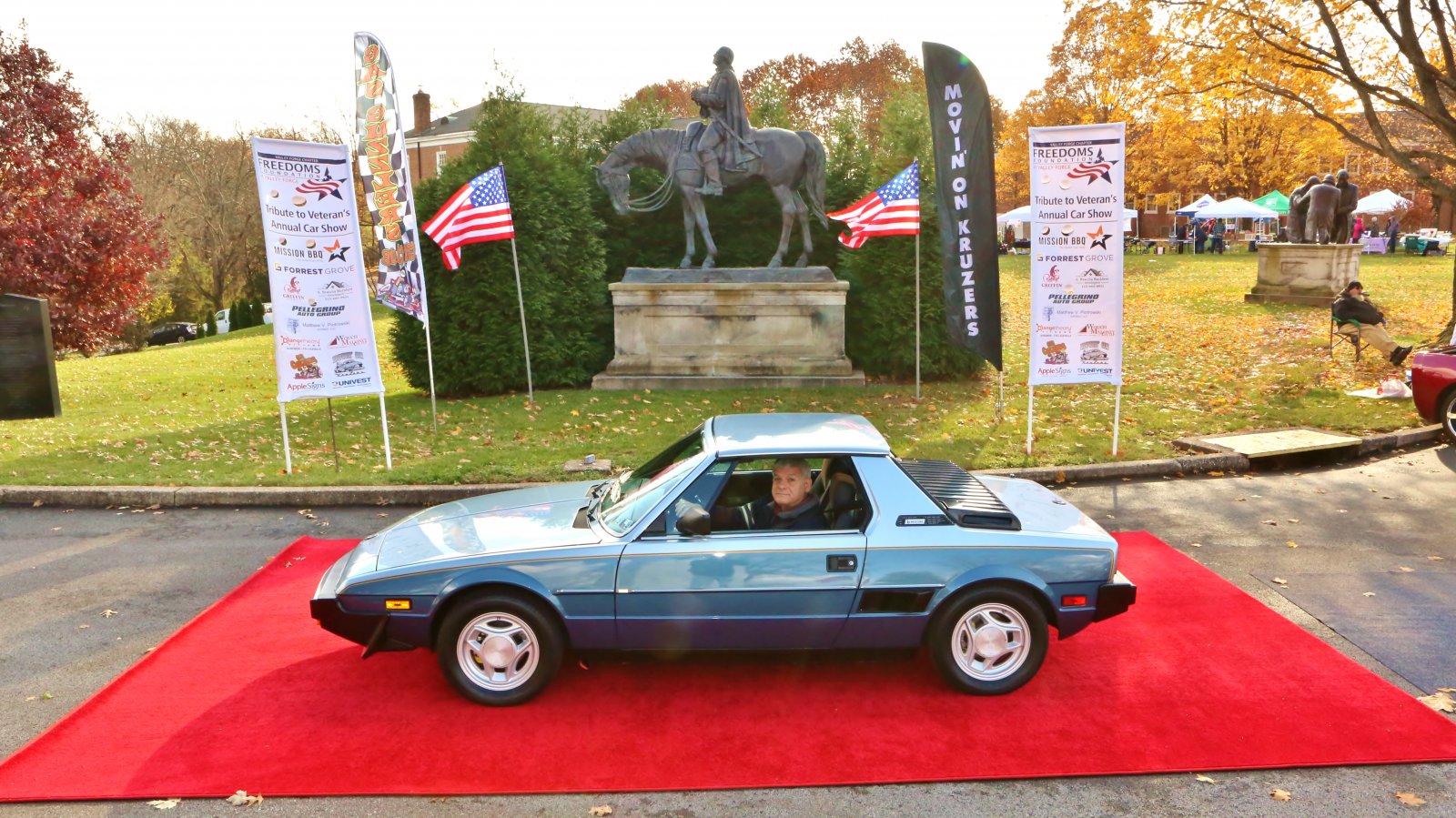 Mine is a long love affair with the X1/9 buying my first 1980 1500 Gold X1/9 which was my pride and joy when I was 23. Back then, compared to the 1300 Beetle I had been driving it was FAST, and compared to the Beetle handled like a go-kart. Even though I sold my little Gold X many years ago, there was still something about them, and about 10 years later brought my 2nd X as a weekender, a 1989 1500 in Grigio Metalizzato with 37,000mls on the clock, and the memories came flooding back. (cue Photos) 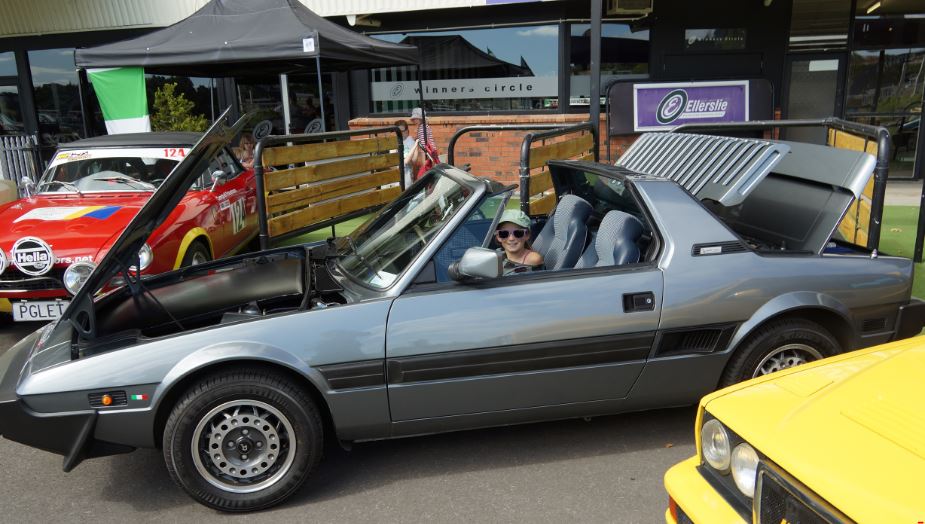 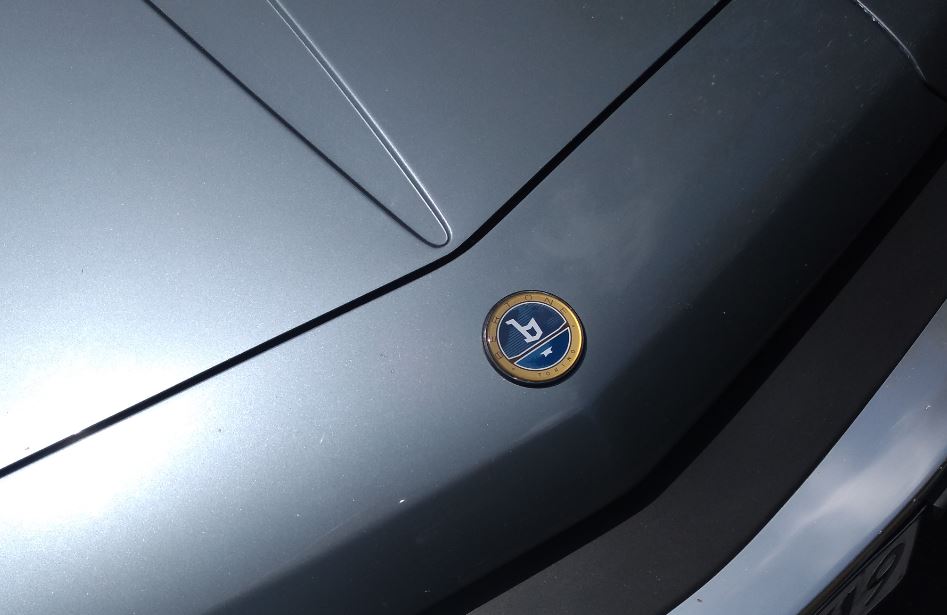 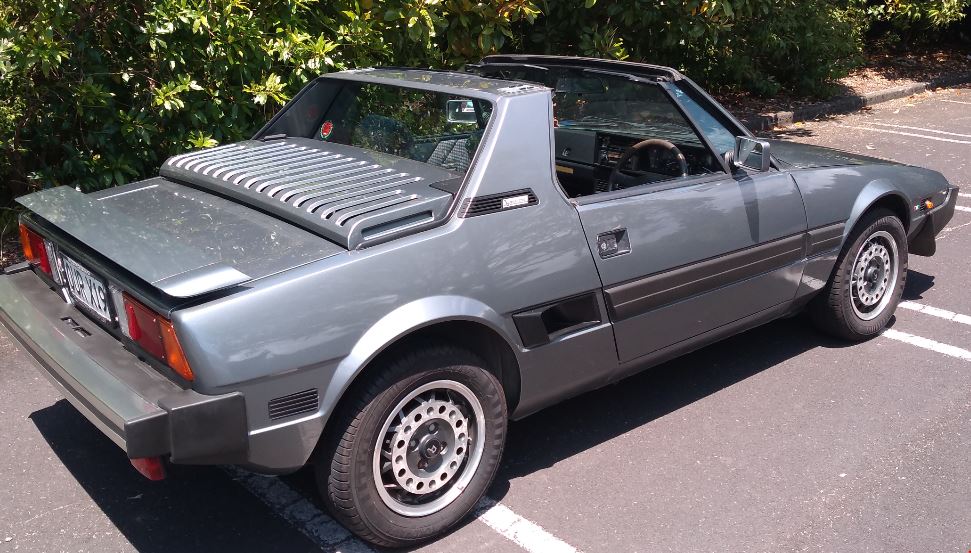 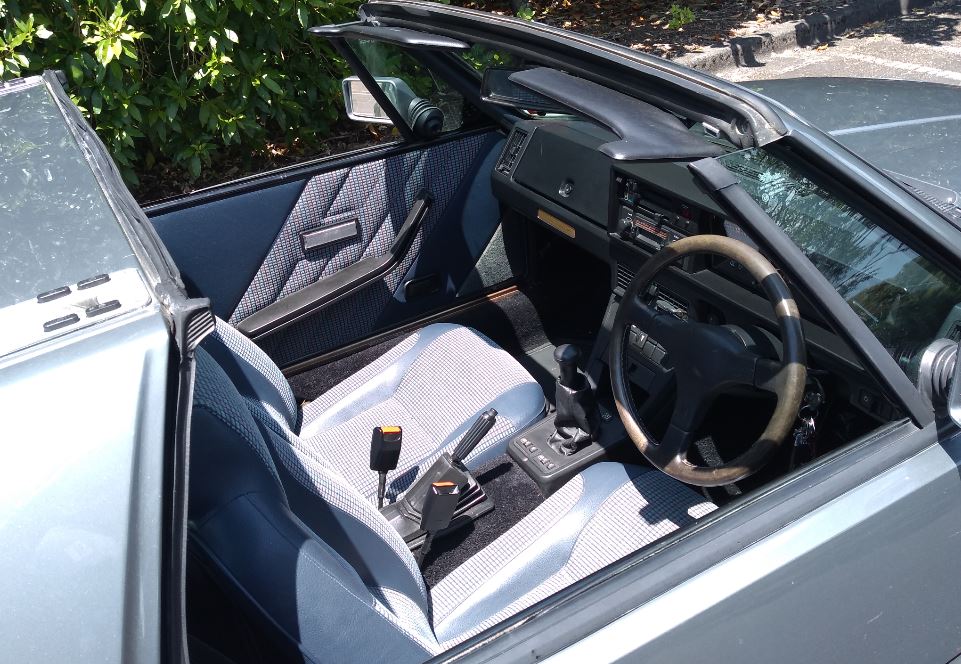 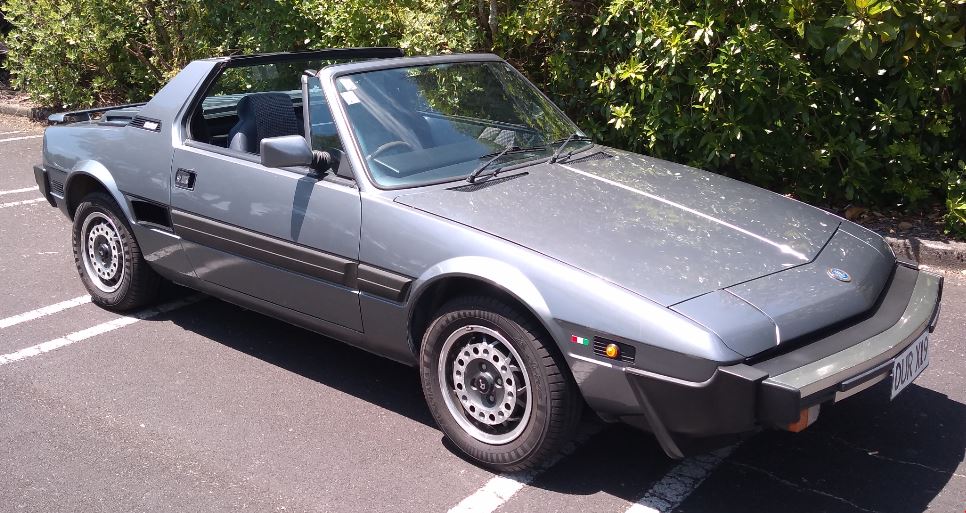 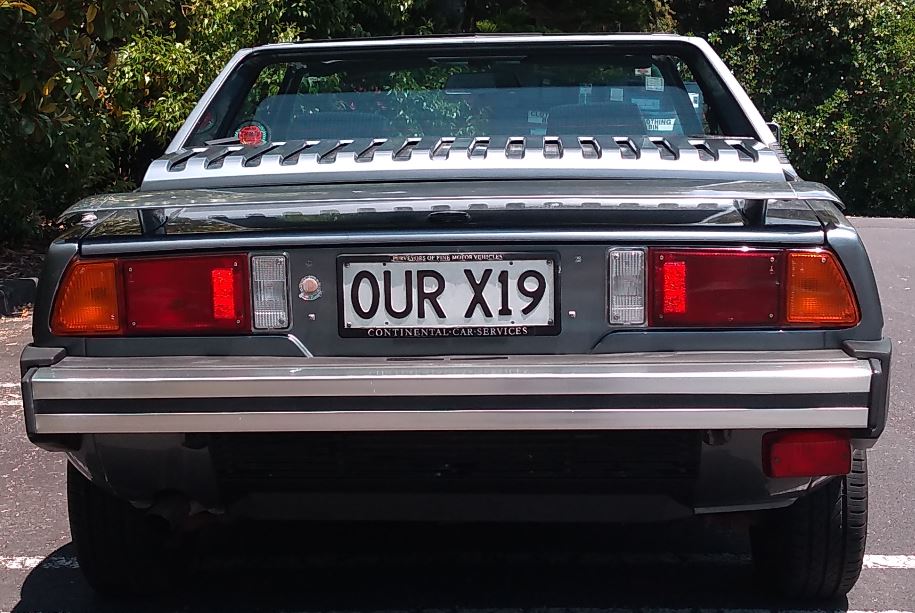 Now the observant of you will note the speedo now saying 17,039 Miles, and no it hasn't been round the clock, as a funny story this. Those are actually the original miles. A few years after buying my 89, parts were becoming harder and harder to find, as my 89 X was missing the wings on the spoiler and was a sense of frustration, so kept waiting for one to be wrecked, or better, find a beat up old one I could pick up cheap as a parts car. Then after 3 years of looking, an X1/9 came up for sale, but not just any X1/9, a 1989 1500 X1/9 in Grigio Metalizzato, but with ONLY 16,200 original miles on the clock, and it had the Wing Tips on the spoiler! So what could I do? Buy it! So now my original 1989 X1/9 has been relegated to the parts car, which still seems criminal. So why no photos of the my first 89 X1/9? Because it's identical, in almost every way, just missing the wings on the spoiler.
So today, just out of interest, I managed to squeeze into the car to get a photo of the speedo.

The beast lurking behind my sons RA65 Celica at the Lufra Hillclimb. As you can see we were in good company. 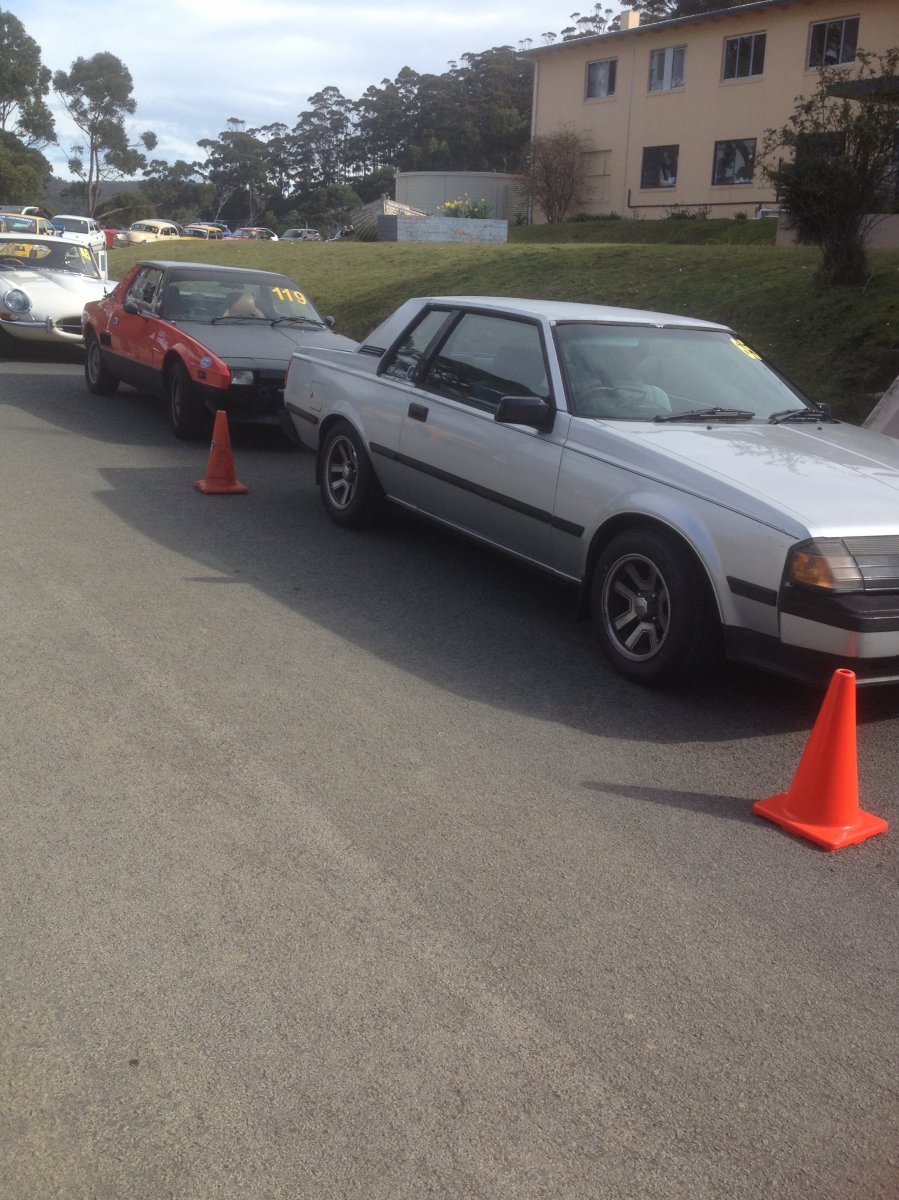 Hi and happy new year. I'm basically a lurker, but have been working on an x19 that I purchased from a very nice gentleman in Oregon. It is very much like the one my wife and I had when we first got married (which was pulled from a junkyard and brought back to life when I was in school, but that's another story). The new one is far enough along that I thought I would post some pics. Hope your new year is a good one. -Gerry 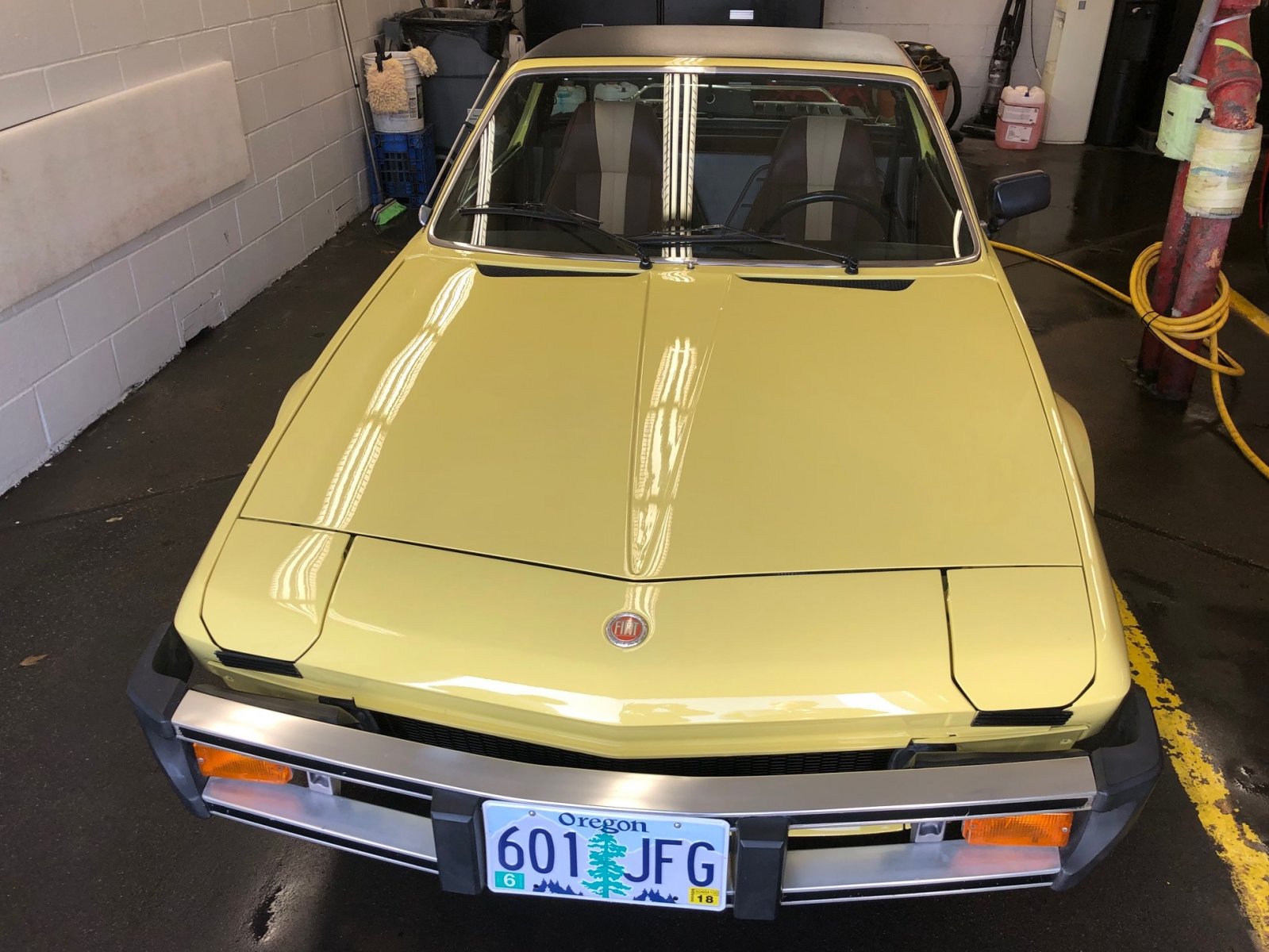 Gerald Pels said:
Hi and happy new year. I'm basically a lurker, but have been working on an x19 that I purchased from a very nice gentleman in Oregon. It is very much like the one my wife and I had when we first got married (which was pulled from a junkyard and brought back to life when I was in school, but that's another story). The new one is far enough along that I thought I would post some pics. Hope your new year is a good one. -Gerry View attachment 18387
Click to expand...

Nice car Gerald, it looks like it was loved. What year is it?