Hey everyone. Got a chance to mess with the X1/9 a bit today and got it fired up to only find that its now a sputter-y thing.

I went around the engine removing and plugging vacuum lines and it had no positive effect on the idle when removed, all did make it worse. So I'm thinking it isn't a basic vacuum leak.

After shutting it off and thinking a bit, going out to start it again it was very insistent on having the throttle pressed to fire and start and took a couple tries to do so. After "warm" starting it was once again sputtering and I took this video of it.


Anyway, I'm gonna drag it into the garage and have at it, anyone got suggestions about what to examine first? Thanks all.

Ignition timing looks great, fired it up and had absolutely no issues. Idled evenly. Thinking its an issue that may come and go with temp or moisture.

Decided to have at cleaning the intake assembly to give me something to do. I have the Air flow meter along with the auxiliary air valve off of the car now.

What is the process for cleaning these two? Generic intake cleaner? Should i take the lid off of the air flow meter and clean the contacts?

I would start with the ignition system - check the connections, the cap/rotor/plug wires and the wire going into the coil. Even the reluctor pickup coil connection.

Easy stuff first - do you have a copy of the Fuel Injection Diagnostics manual? I think it's in the wiki, if not - it should be! I've scanned it, so I can share it.

I battled with the exact same problem, spending countless hours chasing phantom vacuum leaks. If I advanced the timing, it would idle fine but it would hesitate on acceleration. If I retarded the timing, I would get the opposite effect. I finally gave up and took it to Midwest 124 to have Jon dial it in for me.

Ultimately, the problem turned out to be a combination of TPS and airflow meter. He replaced the TPS (even though it was new, I guess it was defective) and adjusted the airflow meter spring -- he said they wear at a certain spot and adjusting the spring tension will fix it. It runs great now so I would check those two things.

However, having said all that, if the problem seems to present only in damp conditions, it could be as simple as a cracked distributor cap.

Hey all, I cleaned up the intake assembly. It had a non-insignificant amount of oil in the tubing between the air flow meter and the throttle body. I think the oil trap from the breather tube was probably all full, i cleaned that out. I cleaned out the AFM and the aux air valve and replaced a ton of vacuum lines.

Anyway it seems to be idling a lot better and driving well. Next up is fixing the suspension, it took a real beating on our last rally. More specifically we hit a massive pothole at highway speed in Maine and i'm pretty sure both right side shocks are shot after that one, they don't want to move.

I'm going to have to do the tie rods as well, as i'll need an alignment with new shocks. My tie rod ends are totally and completely seized, so I plan on having to cut them to get the ends off then removing the inners. Hopefully I can find a shop willing to align this thing, as many of them tell me they don't have the data for it so they wont touch it.
Last edited: Dec 14, 2019

A new rack is quite inexpensive - my boots needed replacing, so I just swapped the entire rack with new tie rod ends. Worked great! (depending on which year though, there was a change for later models - the tie rod ends are specific to that model and so is the rack)

In regards to the alignment, they should be able to reference the Fiat X1/9 circa 1981, the specs are the same. A good shop should be able to use the factory manual settings as a good reference. Failing that using the string method and an electronic angle gauge will allow you to align it yourself. Two pipes, two strings and a way to hold the pipe/string combo level.

There are a variety of videos you can watch to learn how. Putting the car on raised platforms will make it easier to adjust the tie rods.

Either version of rack can be used in any year X, the tie rod ends are related to the year/version of the rack being used. So either outer long tie rods with short inner rods or short outer tie rods with longer inner rods. The X is a very easy car to replace the rack in as Myron can attest to.
Last edited: Dec 17, 2019

kmead said:
In regards to the alignment, they should be able to reference the Fiat X1/9 circa 1981, the specs are the same. A good shop should be able to use the factory manual settings as a good reference. Failing that using the string method and an electronic angle gauge will allow you to align it yourself. Two pipes, two strings and a way to hold the pipe/string combo level.

There are a variety of videos you can watch to learn how. Putting the car on raised platforms will make it easier to adjust the tie rods.

Either version of rack can be used in any year X, the tie rod ends are related to the year/version of the rack being used. So either outer long tie rods with short inner rods or short outer tie rods with longer inner rods. The X is a very easy car to replace the rack in as Myron can attest to.
Click to expand...

You aren't kidding about the rack being easy to remove. I pulled it yesterday to replace the inner tie rods and from the point of deciding to pull it to having it out was 5 minutes. My steering rack looks great and was extremely well lubricated, had to cut the tie rods to get the boots off but it looks great. Hopefully the new shocks will improve the ride of the front end of the car, then its on to the back.

The only thing that held me up on the tie rod ends was the fact that the ones on the car were totally round and smooth. They were screwed onto the rack and also staked on, which was why I pulled the rack to begin with. Pipe wrench took them off once they were un-staked.

It appears the tie rod replacements I got (both inner and outer tie rods) are in the M14x1.0 thread, and did not come with locknuts for the outer tie rods. Waiting a few days for those to show up to be able to get the car back together. Kinda a weird thread size, had a bit of trouble finding a source for the nuts but Belmetric thankfully had some.

The tie rods that were on the car were the later style with a different thread, but the early and late tie rods look to be functionally compatible as long as your inner tie rods match the outers. Just wish they came with locknuts.

Also, planning on filling the rack with 90 wt gear oil, is there a better way to fill it besides filling the boots and sealing them up?

Indeed! - Paul Valente suggested them to me, and I've been using them ever since for lots of metric stuff (including new yellow zinc plated nuts/bolts, etc.)

For filling the rack, the boot end is dry if I'm not mistaken. I've never filled one, but the manual lists the procedure. If you have the rack out, it might be a good time to change/upgrade the passenger side bushing. Perhaps the later racks are better, but apparently earlier racks fail there (another reason I bought a new rack).

Lastly, I would imagine that the rack was changed to move the jamb nut into a different location as a revision to help in the alignment procedure (!??! just a guess). How the heck did they align these things on the assembly line with the original rack?!? Ouch! Wrench access is horrible! I've aligned my car a few times, and it is not fun getting wrenches into there.

Looking forward to your progress!

Hey all, got the X1/9 back together with a few notes.

Early style tie rods (1983 and before) will fit on a later (post 1983, in this case 87) steering rack without issue AS LONG as you replace both the inner and outer tie rods. That is the ball joint screwed to the rack with the threaded rod and the ball joint that screws onto the threaded rod. Also the early tie rods are a weird thread, M14x1.0 and apparently the ACDelco tie rods that are advertised as fitting do fit but do not come with locknuts, those can be found at Belmetric.

Easiest way to tell early from late tie rods at a glance is the earlier have a very short tie rod with a long tube on the tie rod end while the later has a long threaded tie rod and a short tube on the wheel end.

Car went together without much issue, new struts are on and a "close-enough" alignment was not too difficult to achieve (1/8th in toe in). Car was easier to align with the early style than the lates would have been based on the position of the tie rod lock nuts and the access that is possible from below the car. To adjust each side i would have to turn the wheels towards the side i was working on to be able to get the wrenches on the right flats through the window underneath the car. Only complication during installing the struts was a stripped stud on one of the rear shock tower mounts. About the 4th stud I've had to repair on struts on the car, they were over torqued by a previous mechanic.

After all that, car is together and is driving well! Attracts a lot of attention around town driving it with the roof off on Christmas, it was almost 60 degrees so probably the last time the roof will be off till March. 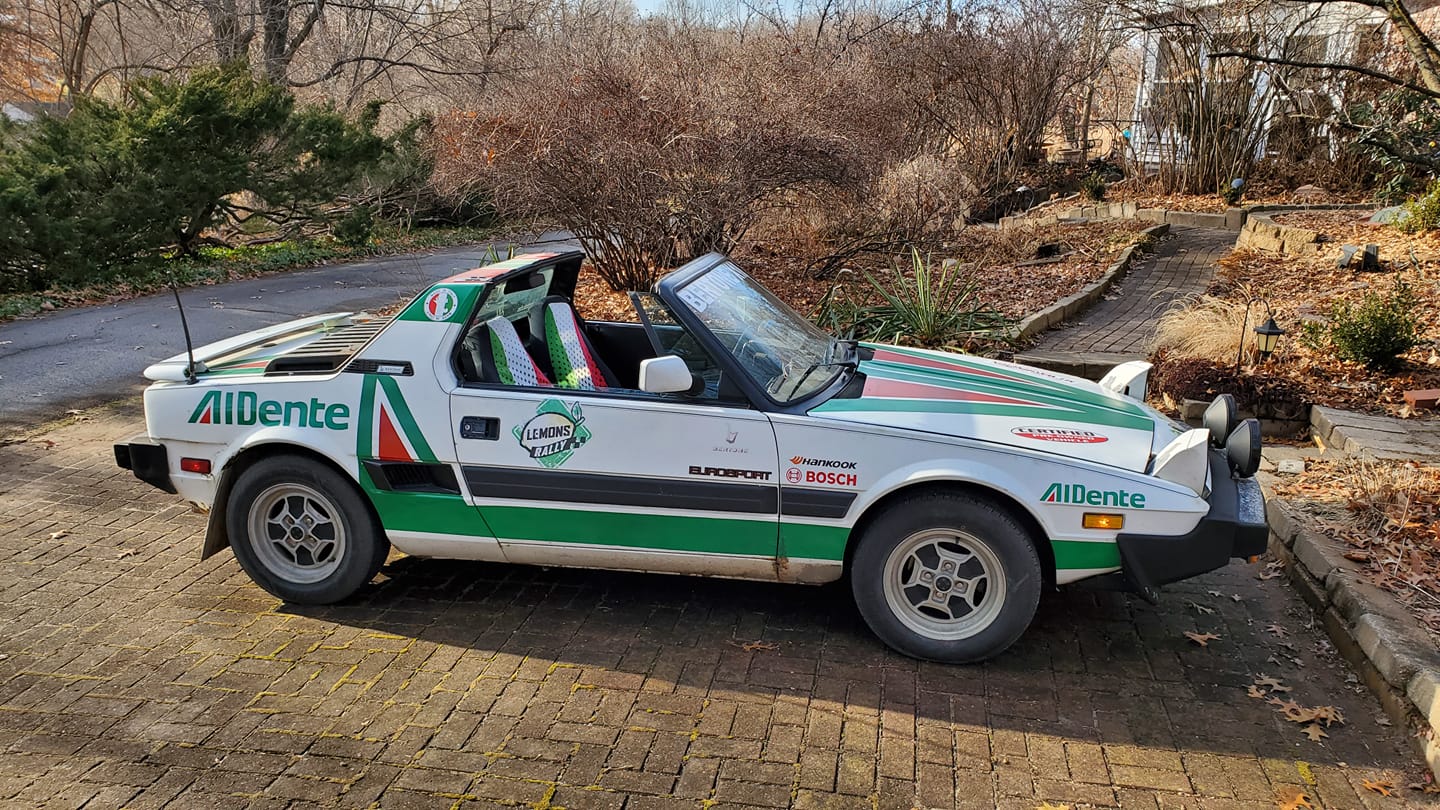 Update, issue returned. My timing was all over the place, it started fine and then started sounding worse and worse until the engine just died on a throttle press.
Rechecked timing and found that the nut on the clamp for the distributor was loose.

Turns out it was the simplest of the problems. I timed it by ear and it seems to be idling a lot better than before, so i wonder how long i had drifting timing