Progess on the 77X 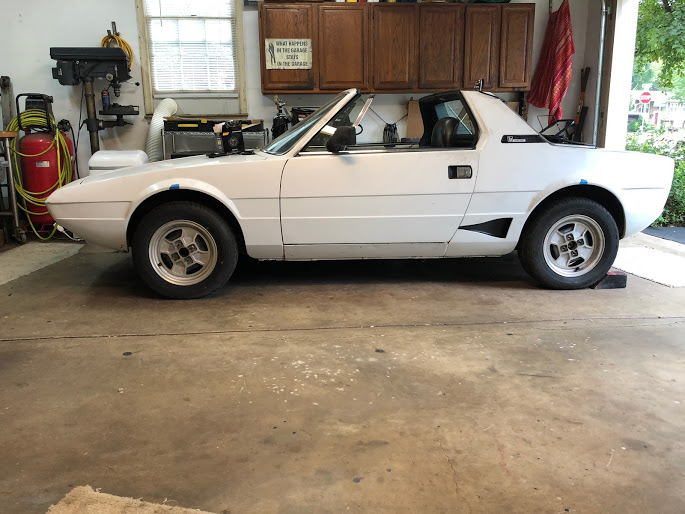 Here is the car as it sits now. Distance from the ground to the blue tape marks at the center of the fender arch is
24.25" front and 24.5" rear. For comparison my Bertone with Konis and cut stock springs is 22.5 front and 22.75 rear. Would like to hear how other folks with stock springs or even sport springs compare. Both my cars have 185/60/13 tires. 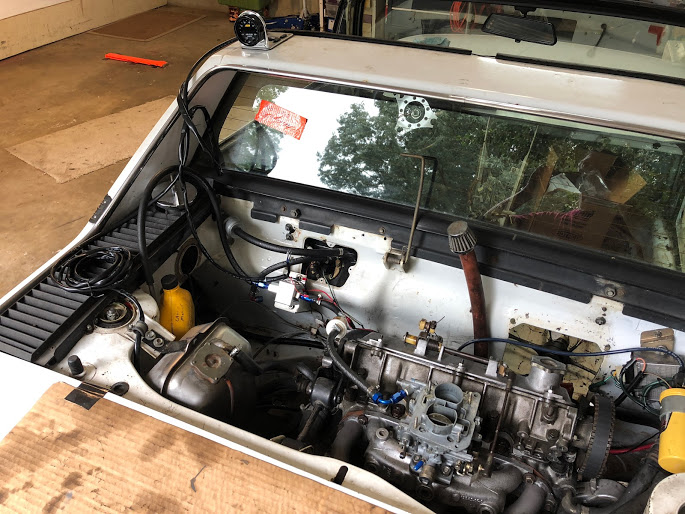 This is my current engine test set up. No tags so I really can't drive on the street but I do putter around the neighborhood. Yellow oil bottle is the gas tank (supply hose end just sitting next to it in the picture). Not really ready to have gas just sitting in the main gas tank. Gauge on the targa is my new AEM air/fuel meter. Will probably move to the cabin since I want some readings while I cruise the neighborhood. Targa location allowed me to set the idle mixture and discover the 115 main jet was too small and the 125 main is fine (again this is static testing). Orange tape on rear window is a reminder that I only have water in the cooling system. I always do this for reborn Fiats as dealing with any leaks or need to change parts in the cooling system means just dealing with water rather than coolant all over the floor. Obviously will need to change to proper coolant before freezing weather arrives.

Carl,
The orange car has Vicks sport springs on silver KYB struts. The nose sits WAY up there. I haven't looked into it yet, maybe someone installed the rear springs in the front? 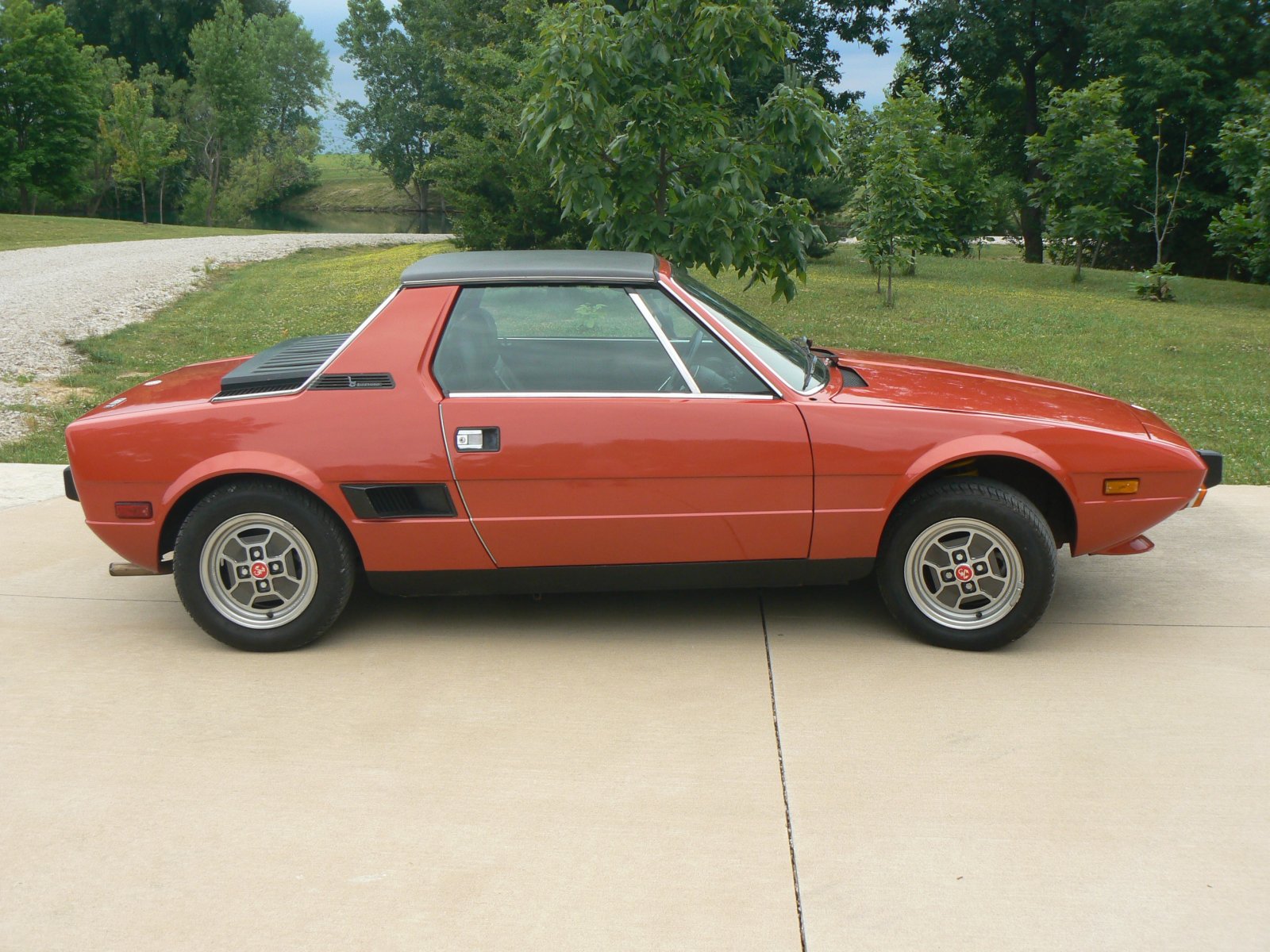 Mike, if you hadn't bought that car there is a good chance I would have!

Without your help I probably wouldn't have bought that car. You get first right of refusal when I sell it (if you want it).
Way off topic I know - but...The car runs really well, very nice. Kinda like a low mileage car should . It's very much the opposite of a hot rod, and I find that refreshing, and relaxing.

Slowly waking up the electrical systems after getting the motor to run wonderful with a stock cam rather than the Abarth cam. We know it has high compression pistons and might now be an interference motor. Sometimes when the motor starts up the alternator light is on, then after a minute or two there is a terrible squealing sound, then it stops and the light goes out. I don't really think it's a loose belt, I may pull the alternator out and have a shop not far from me check it out.

First stab at the headlights had them come on but the doors would not go up, although they would go down. Fiddling with the short fuses fixed that problem, all running lights work. Tried the turn signals but they would do nothing. Then I remembered you have to have the emergency flasher switch plugged in to have Fiat turn signals work (center dash is no installed). Pulled the switch out of the center stack, plugged in the wires and bingo, all turn signals work! E-flasher does not which is why I asked about the location of that flash in tech. What are the odd after 10 years of non-use the entire headlight system and the turn signals would work?

Next we attach the e-brake cable to the calipers and then start work on the heater box.

carl said:
What are the odd after 10 years of non-use the entire headlight system and the turn signals would work?
Click to expand...

My '79 had been sitting outside non-operational for well over 12-14 years (that's as far back as I could trace it), and all of the lights and accessories still worked. As you say, what are the odds. I did look the system over and repair a couple of bare wires and reconnect a couple of unplugged terminals before attempting to try everything. Otherwise no service was done. I've since cleaned the grounds, etc and things got even better (brighter dash lights, etc).

Also had a local alternator shop test the old unit. No cost, and got a report of good health with good output. Nice to know - worth checking with your local shop.

Hey @carl this is a photo of my car from a year ago when we had coffee... It does not look as high as yours does, which is really odd... Is there a difference in the shock towers or body panels between 77 and 1986? That or my car just weighs a couple of hundred pounds more!

ecohen2 said:
That or my car just weighs a couple of hundred pounds more!
Click to expand...

I hope you don't mean with you in it.

What is the front spoiler on it in that picture?

Yea Ed, you have a fat assed car! Don't forget the ground effects probably make it look lower. Too bad we didn't take measurements then. I doubt the 77 and your Bertone have actual structural suspension differences. You should feel real bad and offer the coil overs to me to make yourself feel better.

And for anyone that thinks the driver weight is the issue, Ed and I combined probably weigh 180 lbs.

I should mention that weight can make a difference. Anyone who removes the later style bumpers from their 124 spider will instantly lift their car about 2".

I prefer to call my car weight impaired... Still it would be interesting to do some measuring and find where the difference is.. Something has to be different...

Ed you need to buy some car scales...so I can borrow them.

I have a friend that has some... Should we take a trip up to his shop?

Can you borrow them so we can play around with them?

Next update. E-flashers now work, maybe a loose wire, all I know is I loosened it from under the dash and now it works. Heater is the usual pain in the ass. When I bought the car it had a later AC/heater installed. Removed all that when I got the car to put it back to just a heater assembly. The controls were a hybrid of the cable and vacuum controls from both systems. I had a heater box and fan but nothing else. Every time I need an heater assembly part and it shows up I find I need another. The box is in, core pressure tested, the heater hoses hooked up and a merry two days struggling to get the three control cables hooked up, those cables do not want to cooperate, rather like herding cats. 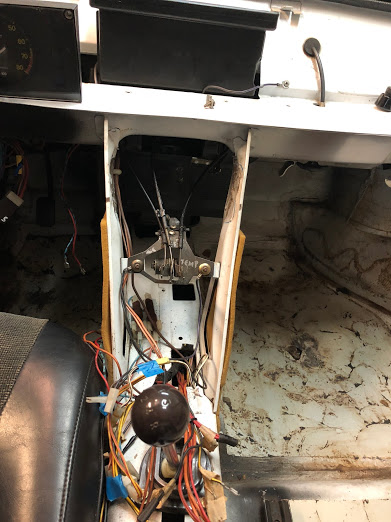 And that was after I found my cable bracket had been all hacked up and I had to get one. Pretty much identified which wires go to which switch in the console although still looking for the rear defroster switch wires (yes, I'm the one who pulled the console out and unplugged all the wires). Wiper linkage cleaned and greased and reinstalled the wiper assembly....and it works!
Then on to the rusted out section in the rear trunk floor. Cut out the rusted section. 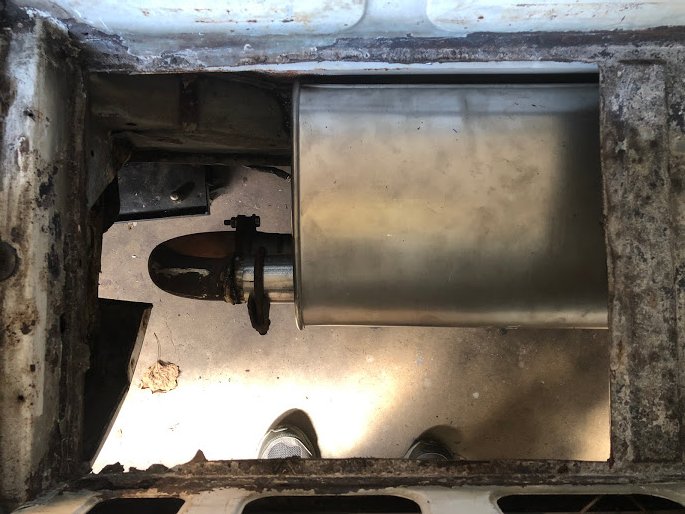 Made a patch panel from Lowes finest 22ga sheet metal. drilled some plug weld holes on the two sides that had decent metal under it and welded into place. I added two lengths of strap metal and welded into place to sort of replicate the ribbing in the stock floor but it was rather a butcher weld job and probably not needed. 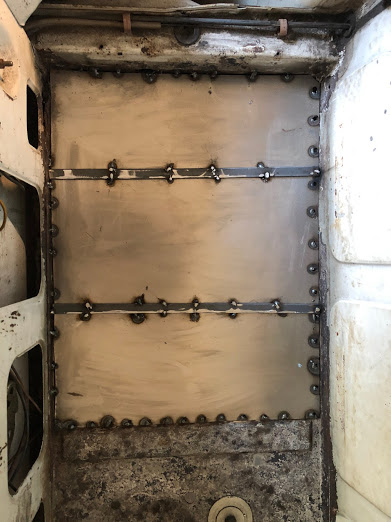 That washer you see at the bottom of the pic is for the muffler hanger bracket.
Went back to working on the heater and tried installing the conduit that goes from the heater box to the center vents and the damn thing would not fit between the two vertical supports...now what, it seemed to be the right piece as the opening and bolt hole to bolt it to the heater box were correct. A trip out to the Bertone with a tape measure told me the vertical braces that go from the trans tunnel to the dash support metal are two inches further apart on a Bertone and the conduit I had was for a Bertone. Once again I had to find the proper part and it's on it's way.
The squealing alternator is at shop I trust being rebuilt.
Once the heater box is sorted and the wires behind the center stack figured out, the interior can go back in.
Last edited: Sep 10, 2018 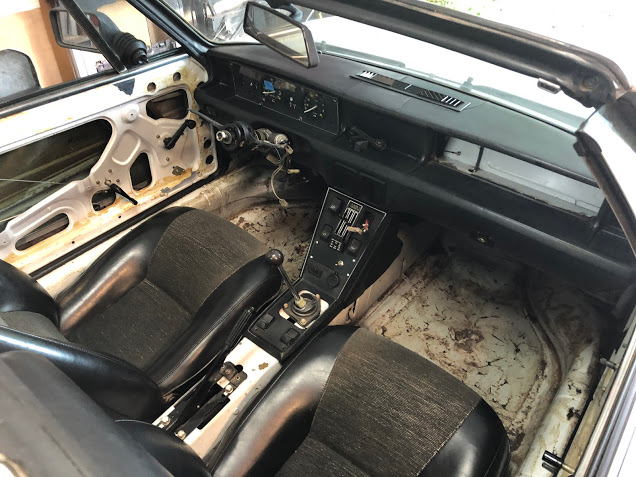 Slugging away without much to report till now. Heater assembly finally complete and installed. Control cable for floor/defrost flap is bent so pulling the lever up just bends the wire. I'll deal with that later, if I disconnect the cable, it's easy enough to move the flap by hand. Figured out all the wires for the center console switches. Installed the dash, was odd because the metal clips at the front of the dash are about 1/4" away from the mating clips on the body, no big deal, the four bolts that hold the dash in place work fine. Installed the center console with the wire hooked up to the switches. The ashtray opening had been butchered a bit for the AC vacuum control panel so the best I could do was make a plate and put in a switch for the electric fuel pump. Tossed the cig. lighter and installed a power port with twin ports. Added the seats, carpet will go in later after I verify everything fits and works. Engine bay is done, exhaust is done. I think I'm coming down the home stretch. 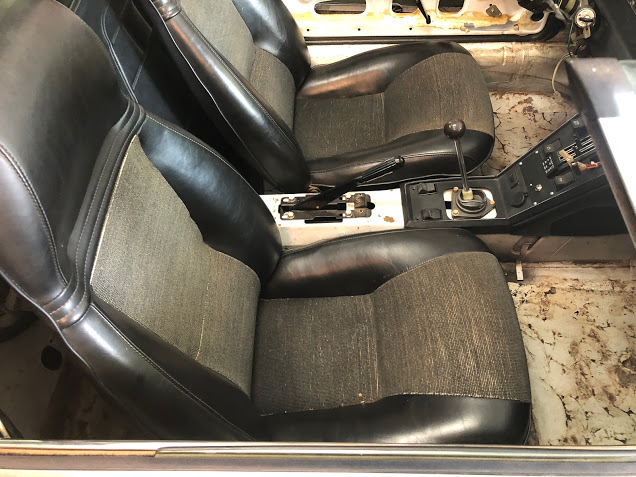 This may be completely different depending on the year of your car. Considering the car had AC and you converted to non-AC, can you tell how complicated it would be to replace the standard AC controls with a set of manual ones? I'm thinking of replacing the vacuum controls with cable controls from a non-AC model, but keeping the AC functioning. Not sure if yours were the vacuum type though. Thanks

My guess is the car originally came without AC and it was installed at a later date. It was the same AC used in the Bertone. I was so busy removing all that stuff that I didn't pay that much attention to the install but I do know that one cable control was used, the one for the floor/defroster flap, and the other two controls were vacuum operated. The button controls and fan switch from an AC Bertone were inserted into the center console where the ashtray had been. The car had already been converted to a 1500 and it looks like that was an AC motor.

All I know is I pulled a ton of wiring out of the car that was for the AC system.

Ya, there is a lot of extra wiring for the AC related stuff. Which is odd because really only a couple wires are needed for the typical system.

The vacuum control units use one cable control, so that all sounds like the stock setup was used. Thanks for the response.

The 77 see the light of day, rolled if off the dollys, drove her outside and gave her a bath. Interior is mostly complete, the carpet will wait till I'm convinced everything is OK. Wheels came from the 78 spider I bought back in the early 90s.