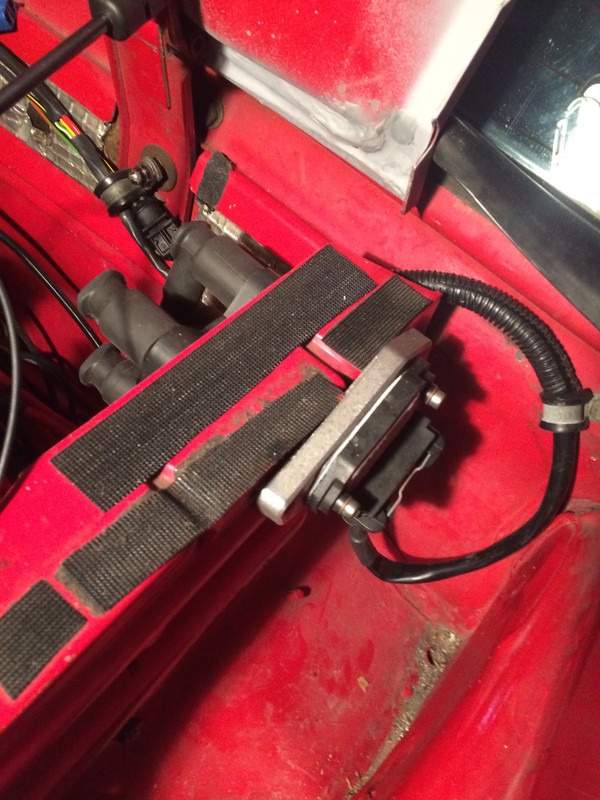 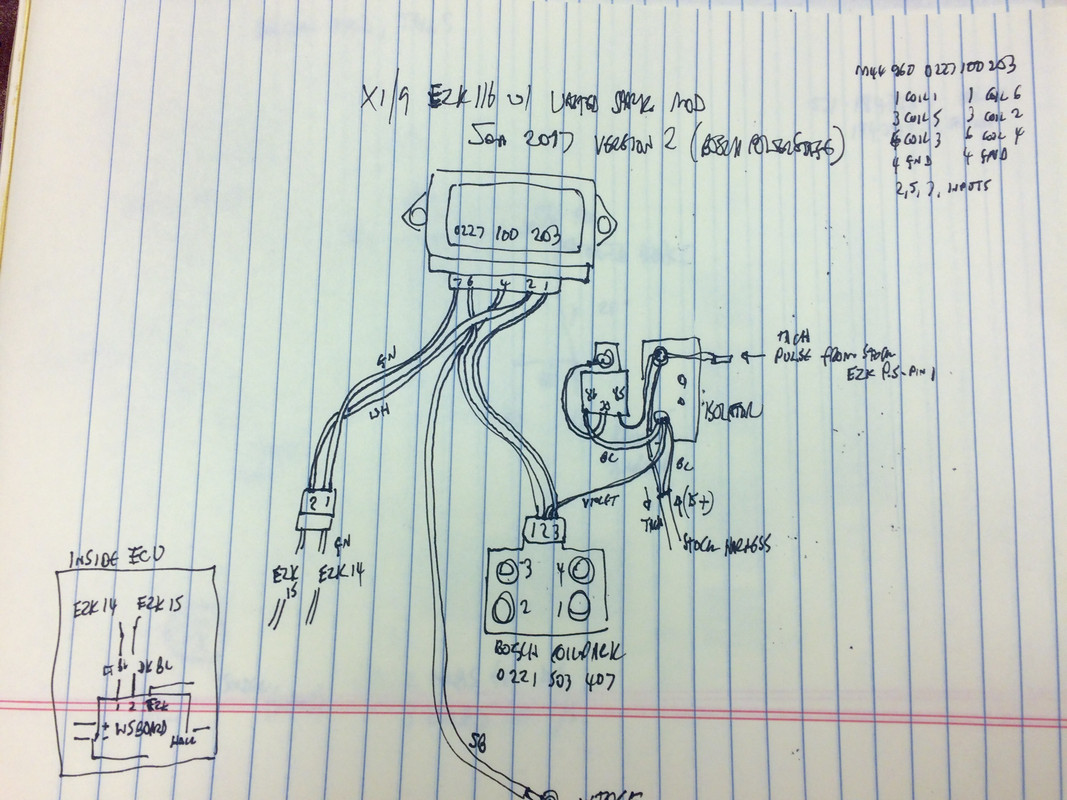 There are many permutations on crimp terminals in terms of wire gauge, coating, etc. These are just what I chose. The female can be used for all the standard connections on the Bosch EFI used on the X1/9.

Since the temps went up into the 40's today, I drove it a few miles to get the crankcase properly heated & clear out some of that nasty condensate.
Last edited: May 26, 2018

Moderator
Very nice / neat setup Hussein.
Where did you get the harness for that? -Bob

bbrown said:
Very nice / neat setup Hussein.
Where did you get the harness for that? -Bob
Click to expand...

I made the harness. I have spent many hours wading through the Mouser website finding the correct Junior Power Timer terminals and housings. I have cut connectors and pigtails from Volvos in the past, but I've mostly run out of the specific 2, 3,4 and 7 pole connectors I typically use.

I'll add the part numbers to the thread for reference purposes.

Drove the car a few miles around the neighborhood this afternoon to further test the Bosch setup. One change I made was to move the tach pulse from the (85) relay terminal to the (87) terminal to feed the transistor collector. Didn't seem to make the tach any more accurate that it alrrady appeared to be. What was odd was that the tach would "hang" around 5K, then release & continue to 6K or so as I raised the rpm's. Close to home, the oil and coolant gauges pegged and the displayed voltage dropped to 9v! At the same time, the lights came on & would not turn off. Put a tester on the alt, and it indicated no charge unless I revved the motor over about 1500rpm. Shut the car off, moved the pulse back to (85) on the relay, restarted, and everything was back to normal.

Not sure where to start, other than with the cluster since that's the last thing I changed. I need to pull it & put regular bulbs back in the three backlighting positions, I add back the tinted bulb domes, and the LED's don't cast enough light now. I'll check over the cluster then.

Drove it today, to see if it was back to normal, it is

Somehow the connection was drawing excess current, and when the voltage dropped far enough, it was backfeeding through the cluster. Everything is good.

cold out, but not raining or snowing

Redid the (-) battery cable in 1 gauge, and cut the terminal off the positive cables and (hydraulic) crimped new terminals. Made a new 1 ga cable to go from the battery to the fusible link 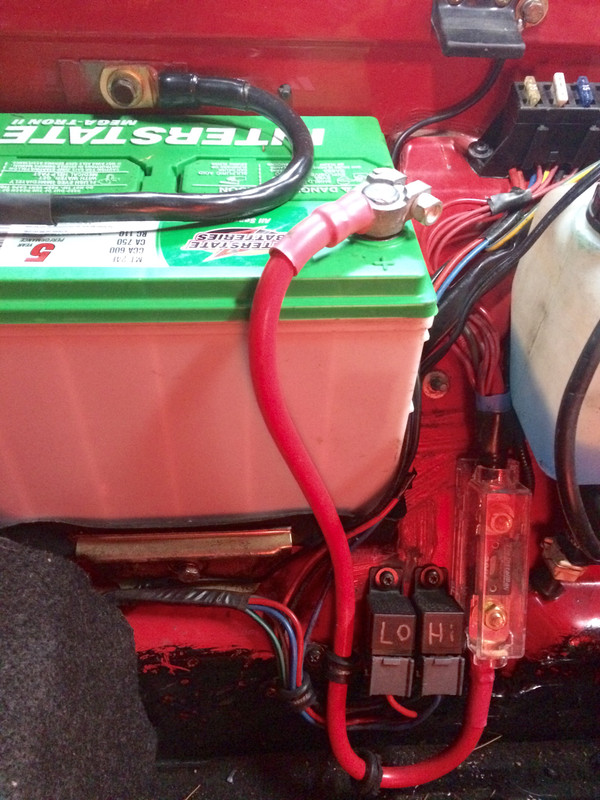 That second fuse looks a bit wonky in the fuse block.

kmead said:
That's a lot of wires. Like a lot.

That second fuse looks a bit wonky in the fuse block.
Click to expand...

Indeed! The wires in the sheathing running over the red wires are just tucked up there - they were all from an amp I had installed to run the 4 headrest speakers (10 wires) in the Miata seats that was sitting on the frunk floor. Those will go away. When I added that small fuse block, I fed each fuse separately from the battery terminal, so those extra four feeds are now crimped along with the main starter cable and the three secondary cables (2 original, 1 extra).

That fuse was wonky - I had removed the fuse block whilst redoing the feeds - I did push it back in place after
Last edited: Feb 1, 2017

Car has been running OK overall - however I have developed a nagging issue with the ECT circuit - I've had a code 1-2-3 CEL for "coolant temp signal (incorrect value/missing)" a couple of times, even though I've checked and double checked harness continuity from the sensor to both ECU's (one side goes to LH ECU, other goes to EZK ECU) and checked hot resistance values at both ECU terminal to ground & value is absolutely in spec range based on engine coolant temp. Sensor was installed brand new, and new terminals were used for every component. I replaced the sensor terminals again anyway, just in case it's a contact issue. Ordered another new 032 Bosch sensor, since the problem is definitely not harness or terminals. If it still comes back, I may have to find another ECU to try - not so simple since it is modified.

Drove 460 miles yesterday & today - no CEL at all. Thursday afternoon I replaced the eyelets for the ign & fuel system grounds on the cambox since I couldn 't find anything wrong with the ECT wiring or sensor. The ground connections were obviously the problem, since the condition is resolved

The only problem I had the whole trip was I flooded it right after getting gas this morning (in Carlisle) - didn't realize that was actually what had happened, just seemed completely dead. Right after my son left to buy a spark plug socket, I got it to start up, of course. Was envisioning having to tow it back to NY...

EDIT: Problem was flaky injector relay, had to replace it later on)

Congrats on extinguishing another gremlin.

So how much power do you think this setup is making? Given that a normal 75hp injected X 1500 gets @33mpg and you are getting 26 it would hopefully be putting out a fair bit more than the 75.

How is Carlisle and what have you seen there? A Volvo or two I presume?

I would think that it is in the 100-115 range. It pulls nice & strong in the 3-4.5K range, so 75-98 in 5th is great on the highway. I would think it unlikely that the power gains exceed that. Once I get the ignition & fuel tweaked I'll get it on a dyno -there is a good one (real world, not inflated DynoJet) in the county that I have used in the past.

Carlisle was great - they moved the Volvo section up right across from the Fiat/Lancia/Alfa section - so my dilemma as to where to park was a non issue Got to chat with several Fiat guys & a range of people interested in what I had done with the X.

The speedo calibration has been spot on. 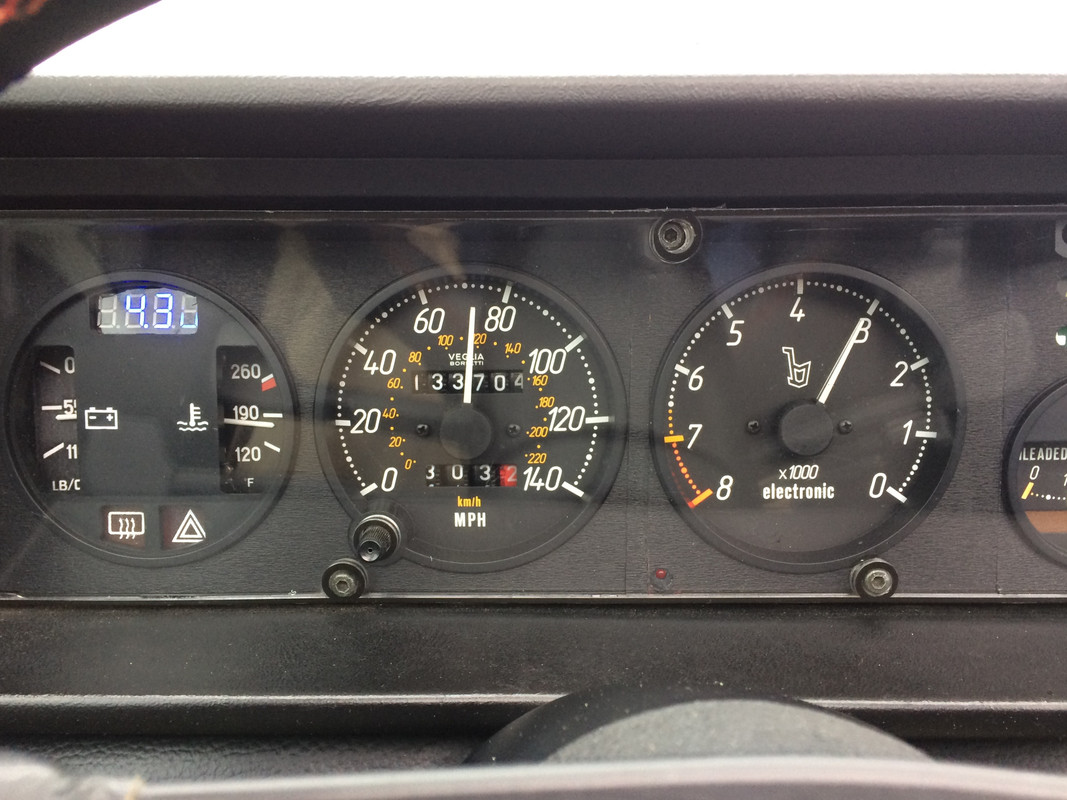 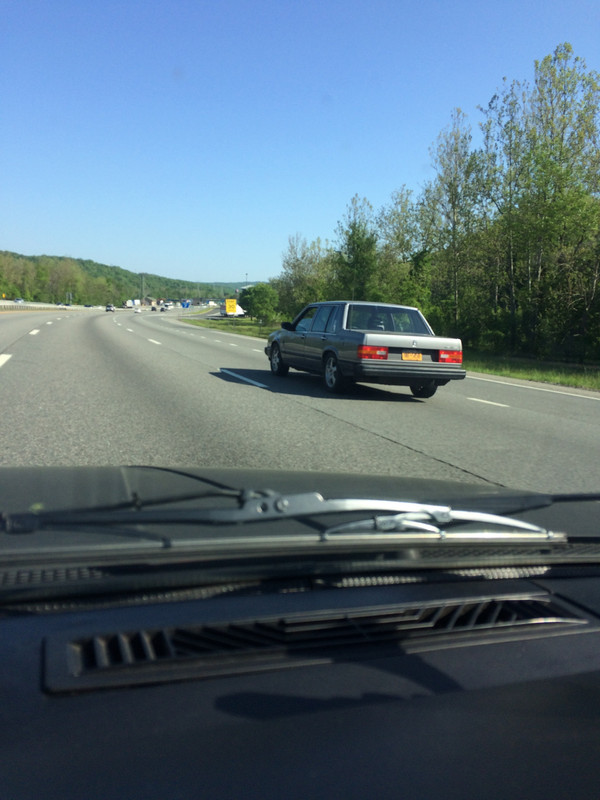 Turns out the problem with the car being dead wasn't flooding - it stalled a couple times this morning, and died when I parked it on our way to a hike. When we got done with the couple hour hike along the palisades.

I tried to start it with no luck. Could see pump was working from the pressure gauge on the rail, had spark, but no fuel smell at all. Fortunately I had a spare injector relay (1323592) - plugged that in & it started right up. Both relays are used - I didn't buy a new one when I did the LH2.4 conversion.

Circuit board has cracks around the solder joints. 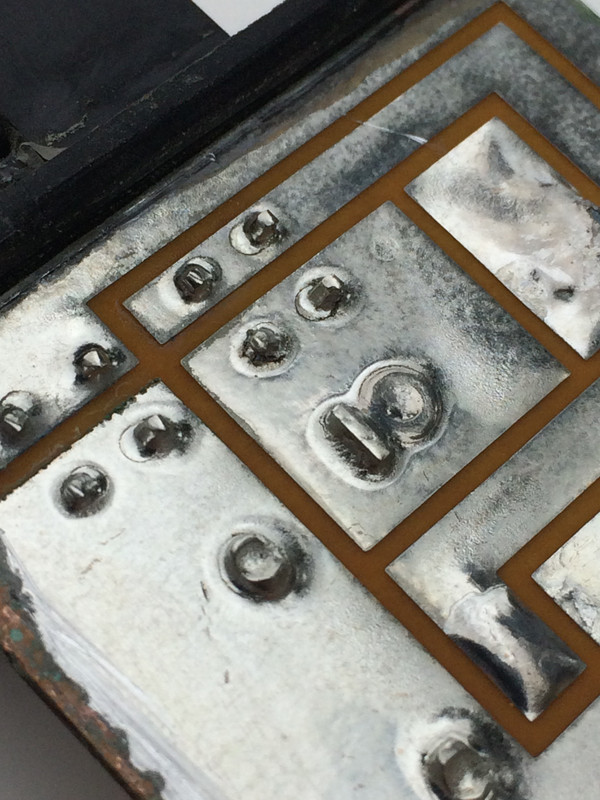 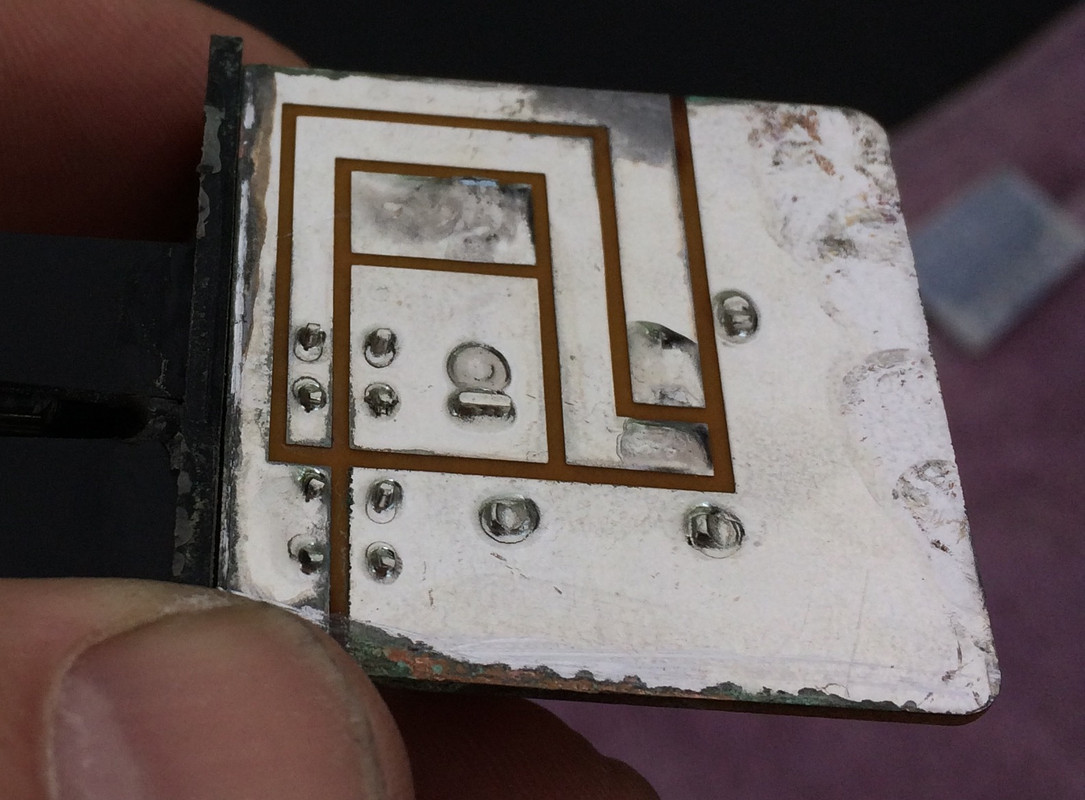 Reflowed the solder joints so I can keep it for a spare.
Last edited: May 7, 2018

Fun start to the day this morning. Came out at 6am to drive the X to work, and first the central lock was dead, and then I noticed the interior lights didn’t turn on... shouldn’t really be a concern, so I went to start the engine & it cranked just fine, but didn’t sound at all like it was going to catch, or even try to. No time to investigate so I just drove my C30. Shame, cos it was a perfect day for top off motoring.

I thought bout it all day at work - when I wasn’t worrying about my slacker AP Art students meeting the deadline, that is.

Once I was home, I checked the basics, and found that the fuse box was dead; no live fuses at all. I dropped the column shroud and verified the feeds all switched with the key.

No problem - question though - what are the white wires feeding? - I can’t find them in my fault tracing guide, and they don’t seem to carry load in any key position. They attach to a pair of orange wires and to a red/yellow (or red-white) on the body side of the connector).

Started removing the fuse - relay panel, and noticed the relays clicking on/off as I jockeyed the relay/fuse panel off the support panel. Aha! Looking behind, I could see the large red spade was loose - unfortunately not the female spade at issue- the male connector had separated from the circuit board after numbering and removing all the harness plugs, I came to this: 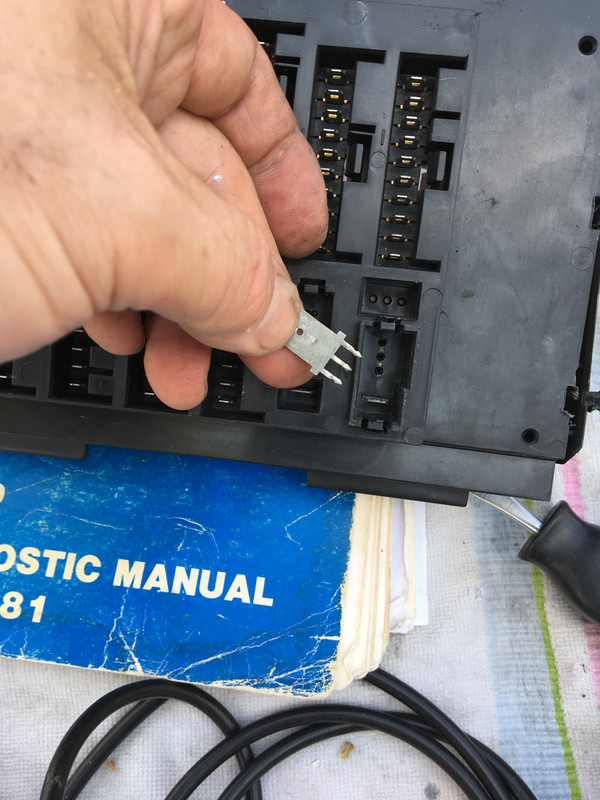 Not about to buy a new or used box - I want to drive it tomorrow- so I took it apart: 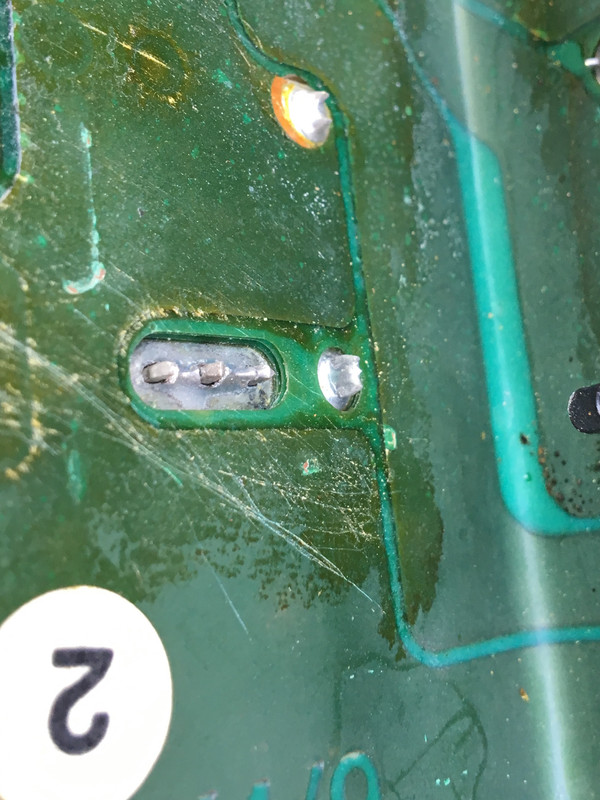 Resoldered the joint, and then epoxied the socket side base and the circuit side, to help take some of the load off the connector when the box is moved around. Only up to the connector shoulder seen in the first pic. 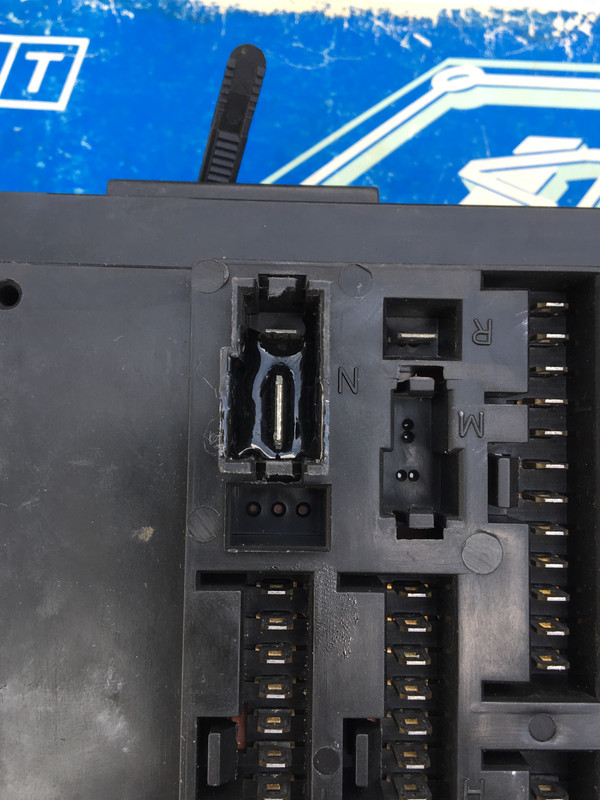 That fixed all the problems except the interior lights and radio. After a range of circuit testing I realized the fuse wasn’t the “Services” fuse, but the one described as “lighter”. Blast. Turned out the element was shorting in a fairly random fashion - I had noticed the radio & lights out from time to time, but the fuse had never blown immediately before today.

lookforjoe said:
No problem - question though - what are the white wires feeding? - I can’t find them in my fault tracing guide, and they don’t seem to carry load in any key position. They attach to a pair of orange wires and to a red/yellow (or red-white) on the body side of the connector).
Click to expand...

If you are talking about the white wires on the ignition switch, they go to the seat belt buzzer circuit.

Bummer about the fuse box. Curious as to how you got it apart as it looks like it is welded together.

Rodger said:
If you are talking about the white wires on the ignition switch, they go to the seat belt buzzer circuit.

Bummer about the fuse box. Curious as to how you got it apart as it looks like it is welded together.
Click to expand...

Thanks - that makes sense, so it just completes a circuit when the key is inserted.

To separate it, there are three screws along one long edge, remove those, then grind back the plastic welded tabs (3 per side) and pry it apart.

Do you have any photos of the inside of the fuse box?
D

What brand epoxy is that you used around the terminal? Looks good.

Rodger said:
Do you have any photos of the inside of the fuse box?
Click to expand...

I didn't bother. It's just a circuit foil sheet that lays across the whole innards - folds in half with the box. One side has all the soldered pins for the harness connectors, the other is the fuse and relay connections. 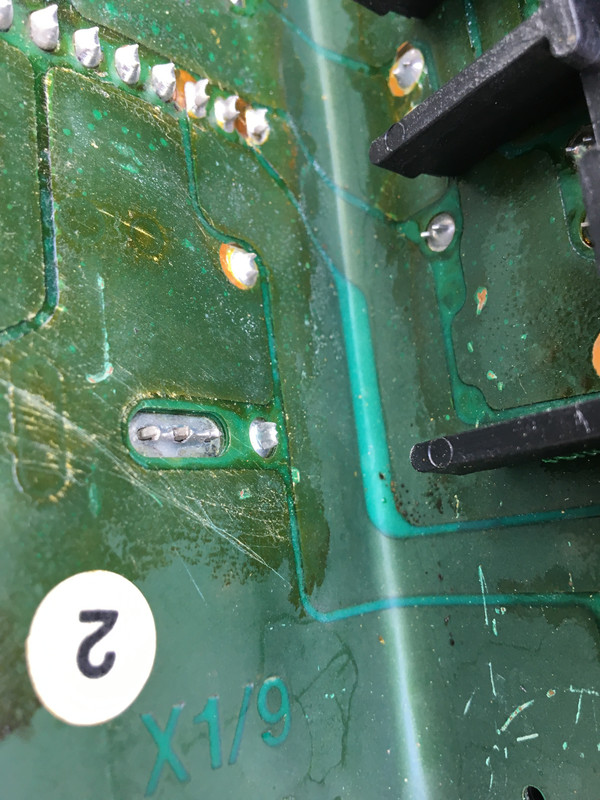 DR1553 said:
What brand epoxy is that you used around the terminal? Looks good.
Click to expand...