From X1/9 Wiki
Jump to navigation Jump to search

you mentioned "careful" balance and blueprinting of the lower end, what does this involve?

Blueprinting is an often miss-used term. Almost any automotive machine shop will know the term and tell you they can do it. Few will do it correctly. Your best bet is to find a machine shop that builds (real) racing engines and talk with them. Skip the shops that do work for general repair shops. Also, expect to pay top dollar for the work.

Blueprinting is making the engine as close to exact tolerances as possible. Starting with the block, the line bore is checked. If its out, get a new block as few if any shops will have the bit to rebore the (crankshaft center) line. Next is to bore the cylinders. This is to be done on true centers. That is the machinist must find where the bore's center is supposed to be and setup on that, not the center of the existing hole. He must also verify that the axis of his bore is exactly perpendicular to the crankshaft. Then each bore is honed to fit for its own piston's exact diameter. This must be done for each cylinder. Finally, the blocks deck must be resurfaced and this must be done exactly parallel to the crankshaft center line.

Next is the crankshaft. Its journals must be turned on the true centers, not the existing centers. Then it must be fully balanced. Rods and pistons must be machined and balanced too. The rods must be rebored exactly perpendicular to the beam and at the exact location relative to the wrist pin center. The wrist pin bushing must also be perpendicular. The rods must also have their big ends balanced to within 1 gram. Then the entire assembly (including pistons) must be balanced as an assembly. Finally, the rod/piston assembly fitted to the bore and check to ensure the piston is square to the bore and that the piston heights are all identical.

The cylinder head must have the valve seats recut to at least a 3 angle grind. Then the valves fitted and the combustion chambers cc'ed and polished.

Thought I would list a few findings as Kelly Fiske and I adjusted the valves oon both my cars over the past two weeks and got pretty damn good at it. Thought I'd list a few "key learnings" that might make it either for others when they attempt to do theirs.

There... hope this helps... By the way... I bet we gained a good 3 - 5 horsepower with the correctly spaced valves.

We only replaced 3 of the 8 on Black Tooth... but all 8 on White Fang were out from 5 to 8 thousandths... what a difference in noise and POWER. What I mean to say, even on Black Tooth a BIG difference could be felt!

Let me now if you find any of these tips helpful or you have any more to add...

The CQ part number is MOU 31-2123. You have to grind off the edges of the mount with a die grinder and if you cant get the old bushings out burn them out but keep the inner metal bushings. Now is the time to sand blast or scotch brite the mount if you intend to paint it later. I used scotch brite and it turned out great but a sand blaster would be quicker if you have access.

I actually mounted the new bushings to an electric drill and sanded them down until they fit VERY tightly and I could just barely get them started with a screwdriver, then I pressed them in with a vise and a cup from a brake lathe that fit on them perfectly, this one to be exact. 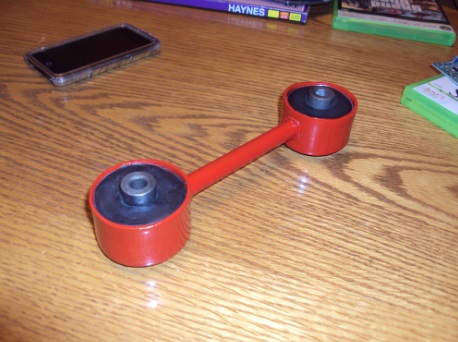 After the bushings are in I drilled out the center holes with a 11/16 drill bit and used the vice again to push the metal bushings from the original into the new bushings. (Using cardboard in between the vice and the mount to prevent damage).

Then all you have to do is mask and paint. I put green masking tape all around the bushings and used a razor blade to trim it so the black bushings are all it covered.