From X1/9 Wiki
Jump to navigation Jump to search

There are two transmissions, the original 4-speed that came with the 1300 cars and the 5-speed fitted to the 1500. Both are surprisingly easy to tear down and rebuild. Although the FIAT shop manual calls for a number of strange special tools, there are satisfactory ways of proceeding without them, described in the references below.

Procedures for the 5-speed are described in Steve Hoelscher's classic 5 Speed 101. There are numerous documented cases of total complete rank amateurs who had never even seen the inside of a transmission before, successfully dismantling and rebuilding their transmissions with the guidance of this invaluable text.

The 4-speed driveshafts and inboard CV joints are different, but otherwise the guts of the 4-speed are fairly similar to the 5-speed. Steve has written a 4 Speed supplement that covers the differences. (BTW, the magnet that catches metal shards in the oil is mounted in a different place in the 4-speed; that's about the only difference not covered in these two documents).

Member Rupunzell has also produced a very detailed four-part writeup that should be read along with the 5 speed 101: Part one Part two Part three Part four

The detailed cross-section and blow-up diagrams in the shop manuals are also helpful.

These are the "tools" I use to change out a trans. 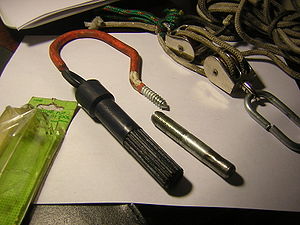 1. A 2 to 1 pully system and a BIKE HOOK to a rafter in the garage. The trans weighs about 91 pounds so installing a hook somewhere centered over the trans and HANGING from it will give ya a good idea if it will support the weight. I sometimes use 2 hooks and a rope sling between them to make a "gantry" of sorts and it gives me some side to side flexibility.

3. A 3 inch long STUD made from a 12 x 1.25mm bolt with the head gorund ROUND and a SLOT cut into the end. (The slot allows a screwdriver to unscrew it from the engine when complete.) I install this stud in teh "2 o'clock" position of the bellhousing...

Then start installing the trans by locating the 4 o'clock STOCK stud, then this stud at 2 o'clock into the trans... and the INPUT SHAFT should line up perfectly.

The differential is of course integrated with the transmission, so it is generally covered by the 5 Speed 101.

The one tricky thing about the differential is getting the bearing preload right. There's a procedure in the FIAT shop manual, but once again, Steve Hoelscher has a better simpler way. It's somewhere in the archives of the old xweb, and I'll post it if someone else doesn't get to it before I can).

There are a number of recommended choices for gearbox lubrication:

The one thing that is known not to work is standard EP gear lube like you'll find at a chain auto parts store. The EP additives interfere with operation of the synchros and will eventually damage them.

A popular upgrade is to replace the 4-speed in an older car with a 5-speed. Now you'd think the going the other way, replacing a 5-speed with a 4-speed, doesn't happen as often... but that's basically the same as replacing a 1300 motor with a 1500 motor, so it's a sensible swap too. Both bellhousings and flywheels bolt up to both motors, so the easiest way to do these swaps is to keep an entire drivetrain together. If you're swapping a 5-speed in, use the 5-speed clutch, flywheel, starter, transmission, driveshafts, and rear A-arms. And likewise with a 4-speed swap; use a 4-speed clutch, flywheel, starter, transmission, driveshafts, and rear A-arms. If you go this way, remember:

This Fiat service letter is why there are two 4-speed clutch pressure plates, flywheels, and bell housings. media:tranny.pdf