On Nov 3rd 2019, my dream of owning a brown X1/9 finally became a reality. The price of free-dollars was even better! While I dont have a concrete direction for this project, nor do have a set timeline for completion; as a general outline, I'm going to keep it rusty & grotty looking, and naturally it's gonna be low & loud. This thread is more of a blog to detail the project status and updates, versus a traditional "build" or "project" thread. 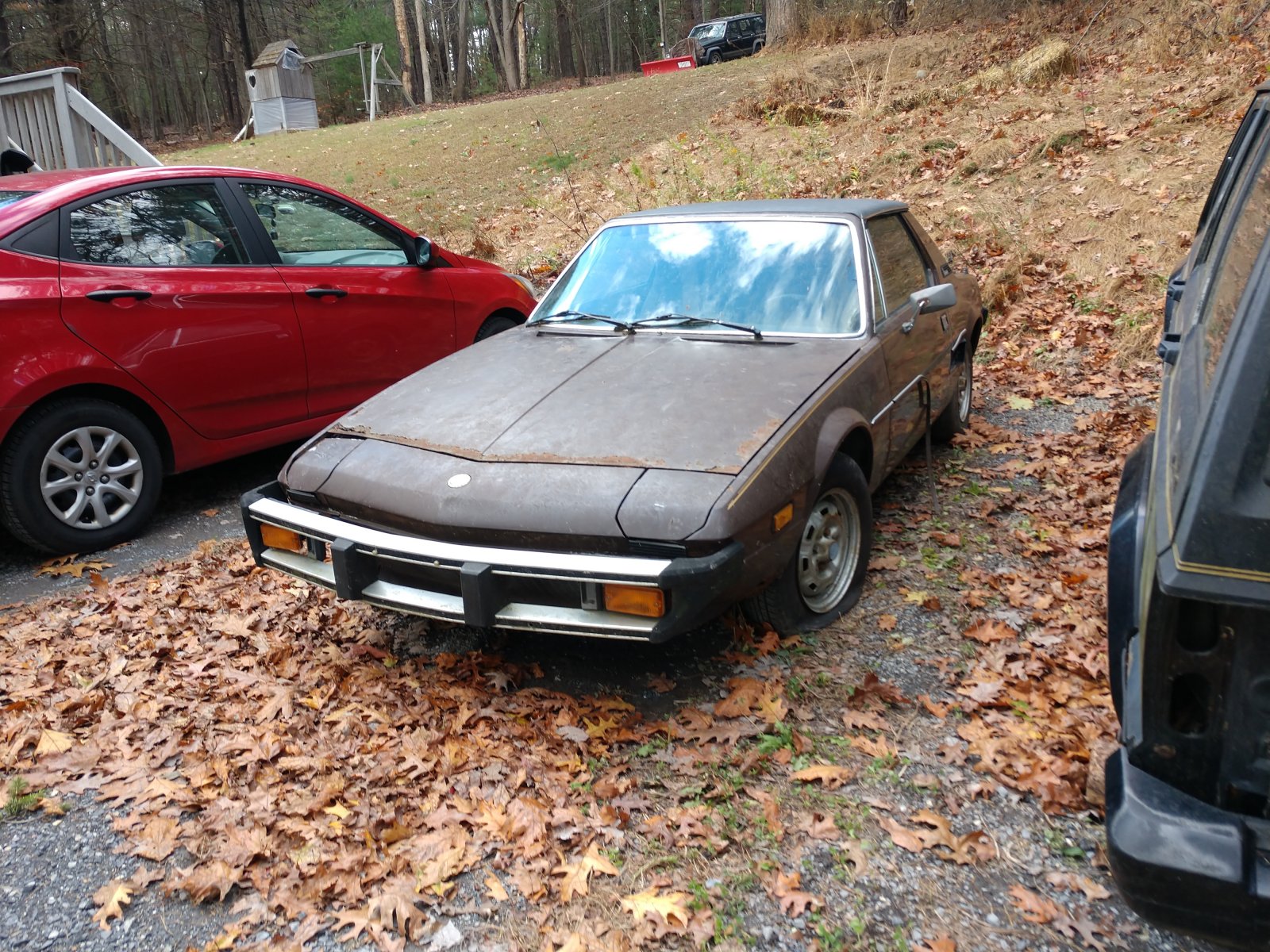 Today officially started this project. Jon "nichol01" and I met up late on the morning and began to look over the car. In short order, we began removing the abundance of leaves, gravel, acorn and decades of human DNA. Once we massaged to driver's seat from it's rusty tracks and removed yet even more acorns; we quickly removed the carpet and began cutting out the remains of what used to be floor pans. The drain hole in the spare tire well and a small spot on the sill, were also removed. Mid afternoon Jon had enough rust dust in his lungs, and departed. I spent some more time on the vacuum and even got to turn a couple wrenches. First up was rain tray removal. Next was the coolant res, to give better access into the bay. Charcoal canister was next on the block, followed up with removing the carburetor (34 DMTR). 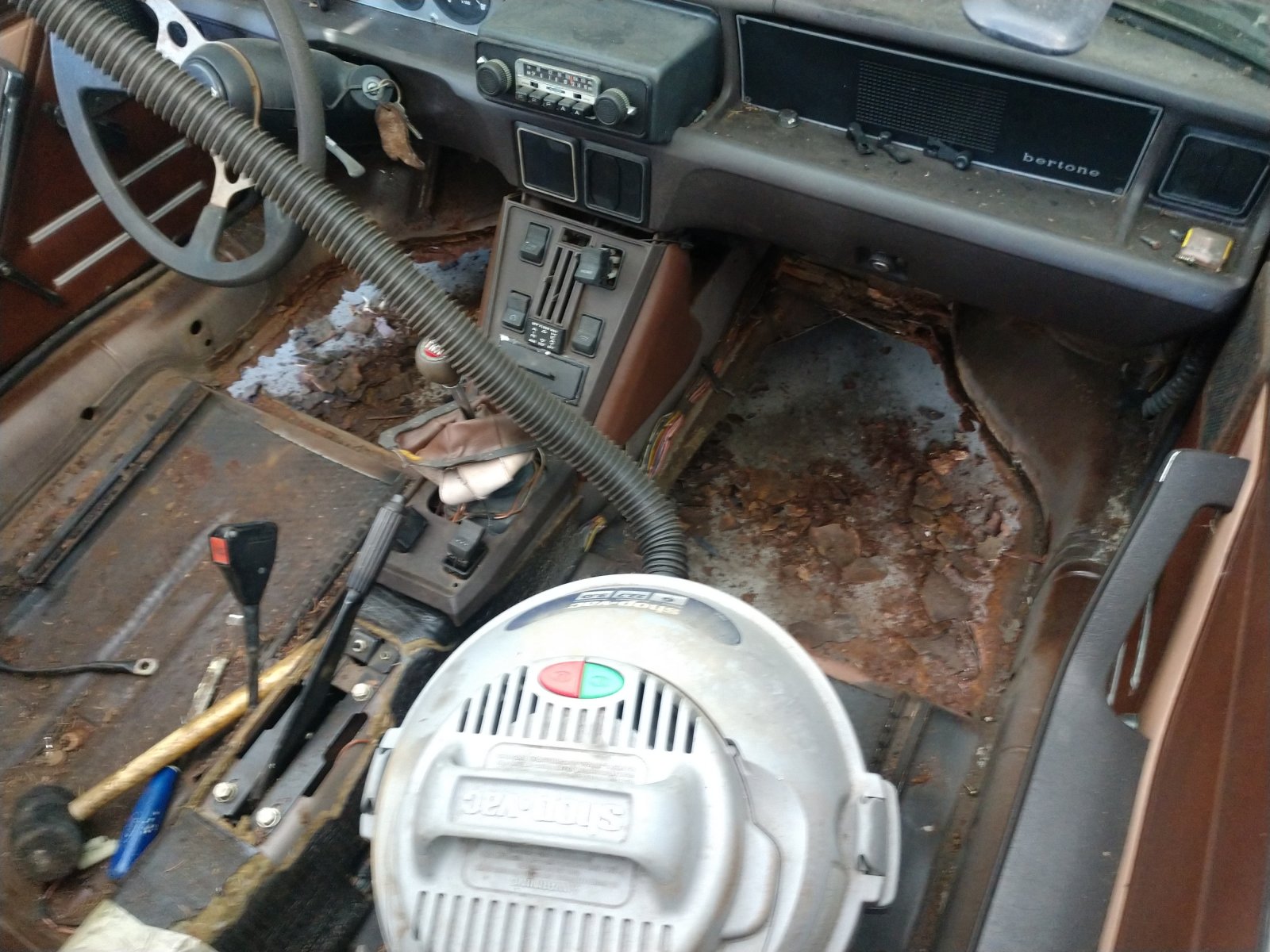 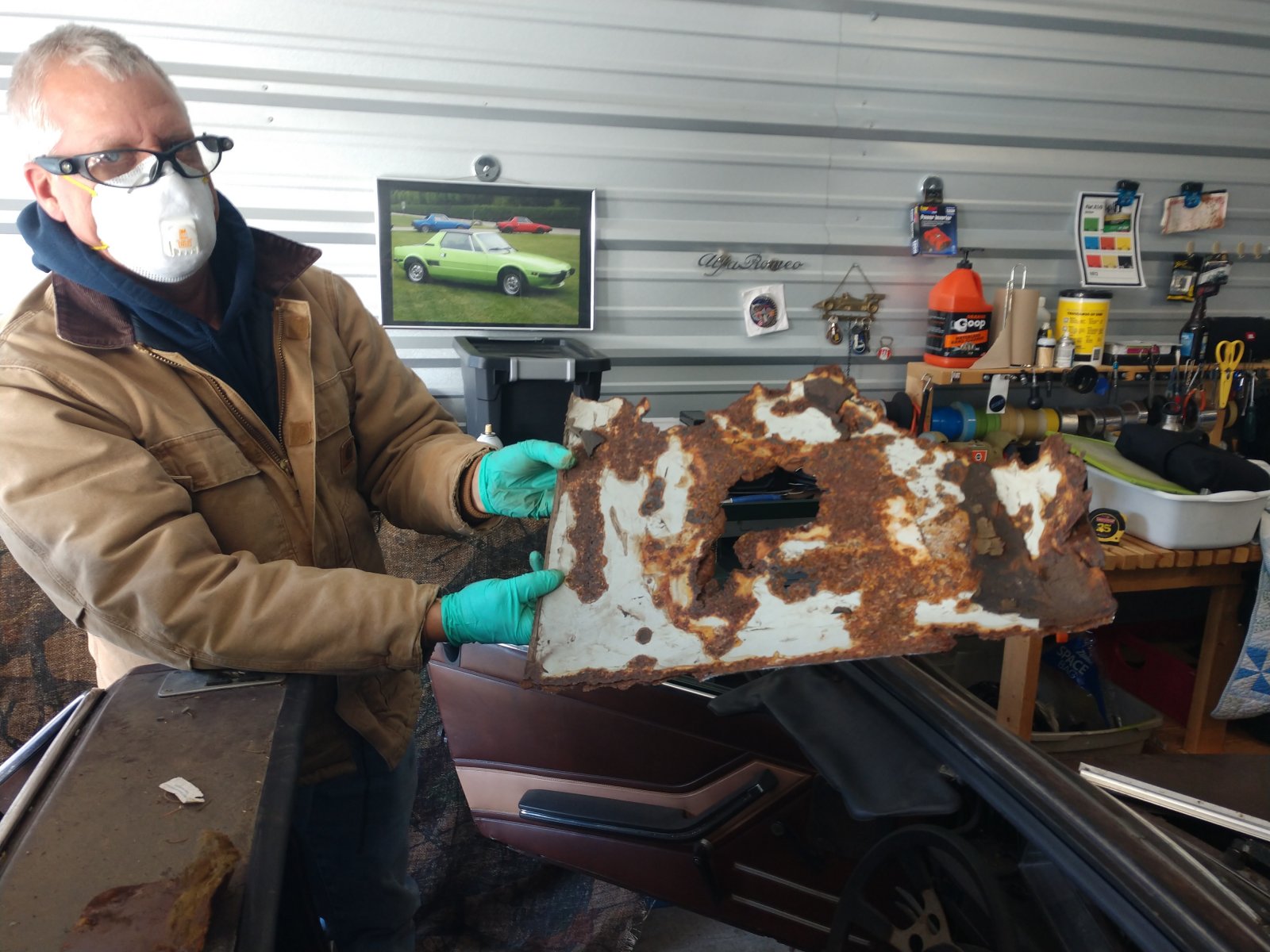 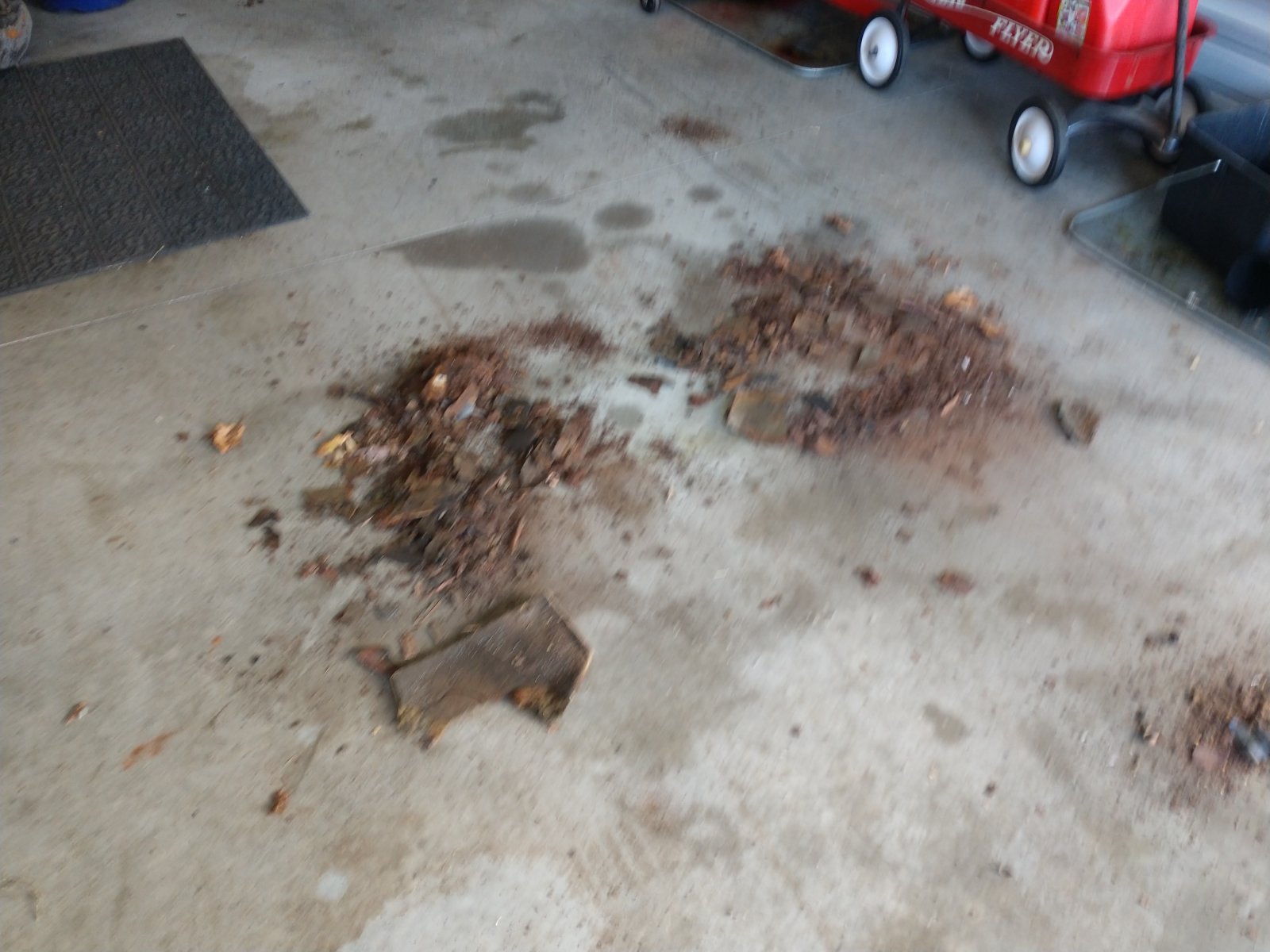 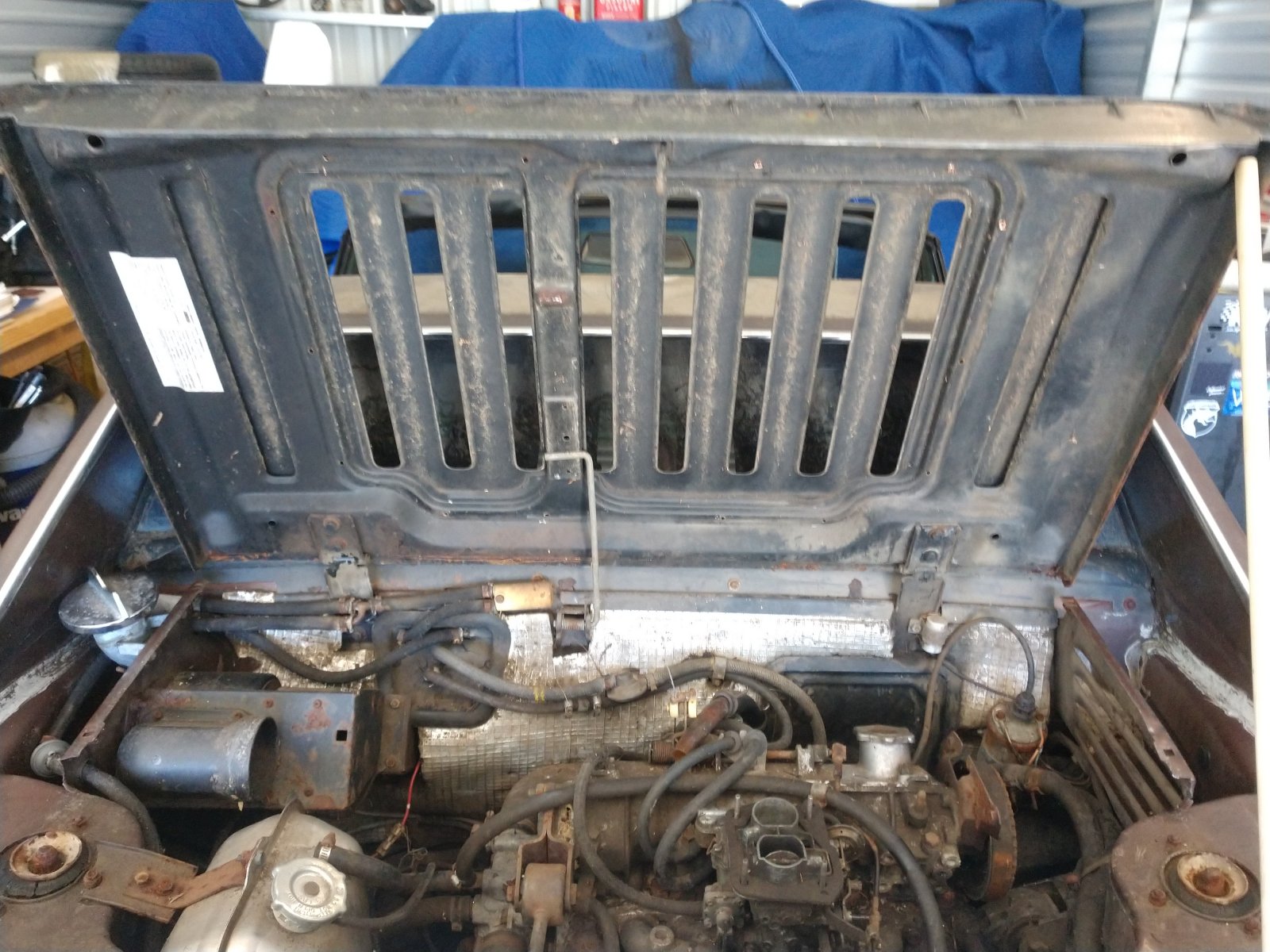 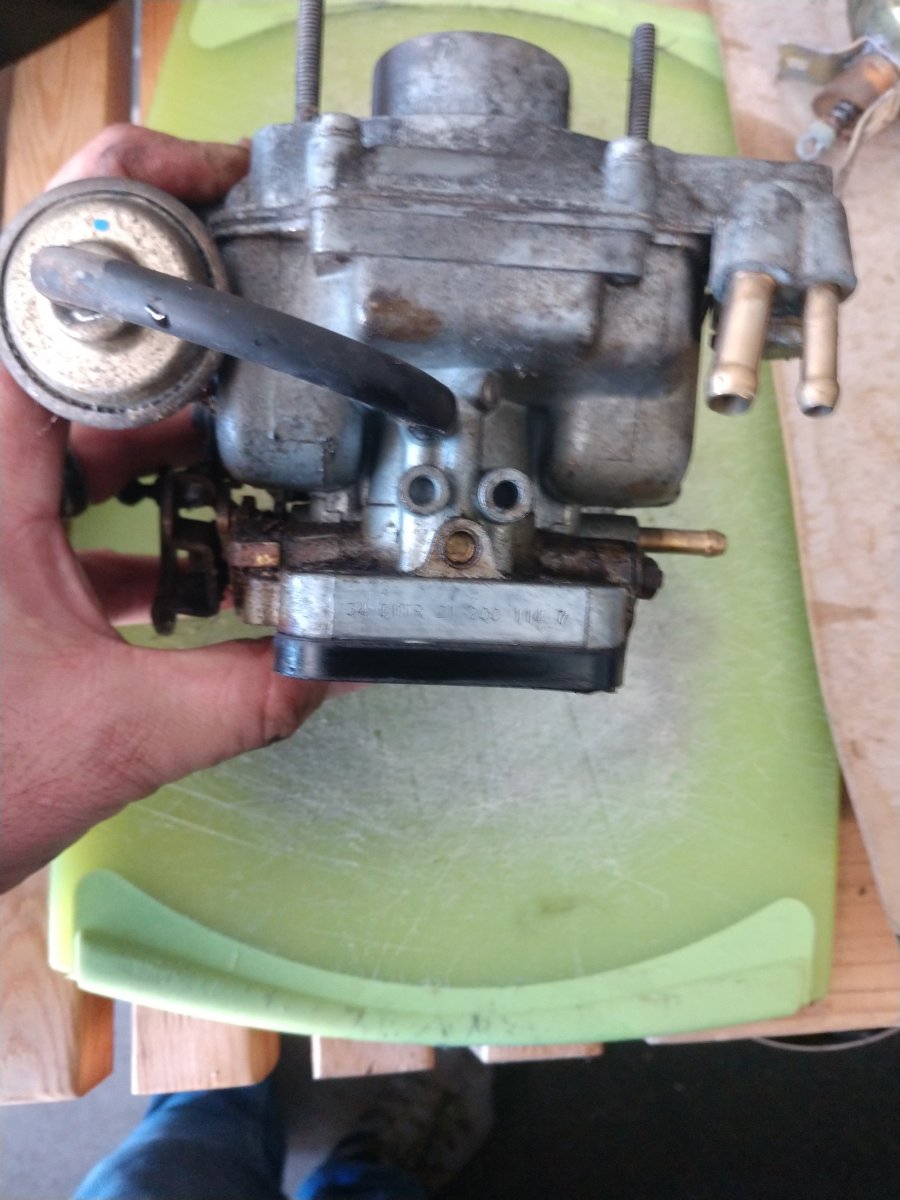 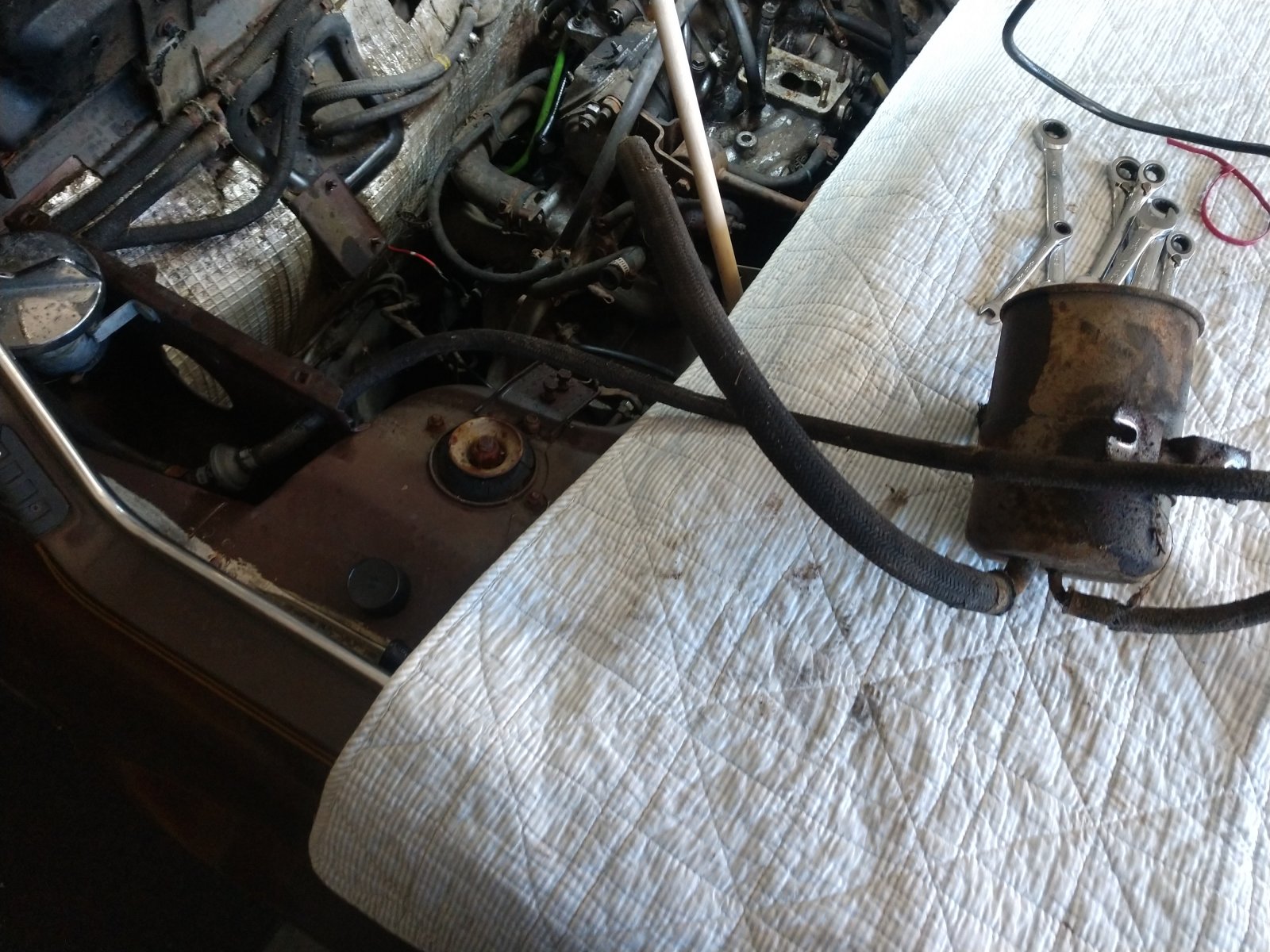 Eastep said:
The price of free-dollars
Click to expand...

I think you paid way too much.

The beginning of a new project is always such fun; so many ideas, so much enthusiasm, so much potential.

Dr.Jeff said:
I think you paid way too much.

The beginning of a new project is always such fun; so many ideas, so much enthusiasm, so much potential.
Click to expand...

Agreed!... Until expenses start adding up. My goal is roughly $1000 over the course of about a year.
Largest foreseeable expense will be
. Clutch & Pressure plate
. Brake system refresh
. Tires
. Cylinder head cleaning & testing
Items that are consumables such as fluids, filters and belts (while adding to over costs), will not be factored into my over budget. Same applies to materials used during the build process.
I'm also planning to use as many used parts as possible. This is mostly for aesthetics and keeping with the junkyard look. Items such as brake calipers and others, that are "rebuild able" with kits or internally, will be restored as such (if possible).

Now wait a minute Dan. My Xs do have a signature look but rusty and grotty (a law firm?) is not it...I prefer the Rustoleum look.
I initially thought of getting this car when it was first advertised but the pictures he sent me suggested it was too far gone rust wise so I'll be following this thread closely. You know, some day those stock steel rims will be worth lots of money, I bet.

Have to admit Fatrat is looking good. At least in pictures...

It's strange you seems concerned, I was "probably" talking about another Carl...

We only allow other Carls when they spell their name differently, as in with a K..arl.
Next time you are in the DC area drop by and I'll let you look at it close and personal...and maybe even drive it!

I don't know which carl you were thinking of but I had an initial interest. That interest was replaced with a 1990 Miata...and that's a whole 'nother story.

Eastep said:
This is mostly for aesthetics and keeping with the junkyard look.
Click to expand...

That part is already nailed!
I remember several years ago I saw a ad for a decent looking X for sale. Went to check it out. Actually it was in very good shape overall, really didn't need too much so it would have been a easy project. But it was that same "****" brown color you seem to like. I passed on it simply due to that (true story). But hey, I get it and I never judge the taste of others.
Seriously, color choice is very subjective and I've always liked odd ones so no offense intended - just having fun with you.

I'm doing the exact same thing with a X that I originally bought just as a parts car, due to it having a lot of rust and damage. But after getting it home and inspecting it more carefully, I realized the rust is only in areas that are not critical - all of the structural parts are solid and straight. Kind of the opposite of the usual rusty X. So I decided to revive it rather than strip it. However it is so ugly I'm not sure if I'll be able to live with it , therefore some day it might get some sort of cosmetic cover up? Not sure exactly what/how, but enough to hide the hideous multi colors from mix and match panels, etc. Or not, we'll see. Also I decided to go with more of a "track car" theme so I don't have to bother with any interior or trim or anything else that I don't want to spend time on. I'm also tempted to cut it up a bit and go for something similar to the original "Runabout" concept. Not any attempt to recreate it, but just more of a custom along that direction.
It has all of the same needs as you described; brakes, clutch, electrical, tires, cooling system, fuel system, clean and service, etc. And like you I want to keep the total budget as low as possible. So I'll try to rebuild the brakes rather than replace them (Fiat calipers sure went from really cheap to really expensive), and things like that. But it only makes for more work/time that I should be putting into my other projects.

Side note: Funny, but I tend to associate the term "rat" with those really stupid American creations that make absolutely no sense to me. Like the stuff that guy here in Vegas makes on a TV show and sells for outrageous money (by the way, I've seen him at local events and he is about four feet tall in reality, which explains the attitude). A friend of mine calls stuff like that "abortions", and frankly if you ever saw one you would see why. I've also heard of them referred to as "clown cars", but I think that is cruel to actual clowns. I certainly don't mind the concept of a "as is", rough looking, non restored, make it work on no budget, totally DIY, be creative with things, type of project car. It can be really cool and interesting. I've seen several really neat ones in the VW world (they seem to gravitate to that). But I just have a negative association with the use of the word 'rat' due to those other things. So for lack of a better term I prefer "outlaw"...just a personal thing.

Coming from a VW background also, the "out-law" look was a no brainier. I also plan a "track inspired" aspect and may even make it a racer. This is more of a cost cutting and ease of building, then anything else. I'm lazy and I don't want to spend much money on this car. The initial rust had me worried, but actually, the car is very solid! The biggest rust issues that I'm currently aware of, was cut out, yesterday. Everything else is just bad enough to pull off the look I want, while still having enough solid material to be safe and usable. I haven't hooked up a battery to the car yet, but any electrical issues or complexity may become hot/sraight wired with inline fuses, relays and switches.
As for the dookie brown; I get it. Its just one of those colors that I like on X1/9s. I do agree and I also am not a fan of the term "rat" or "rat rod". I just don't have the vocabulary knowledge to call it anything else. I would call it a "bucket", but being a former vw guy, the term "bucket" (to me) is synonymous with this car and this car only: 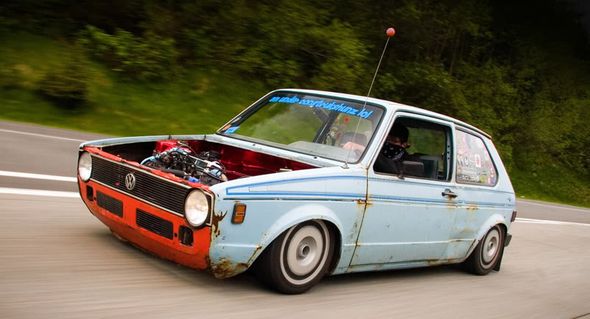 There was a really crusty white racer, here for sale a while back. I was really into it, but I can't find the pics anymore.
I'm leaning heavily into this direction: (but more beat to ****!) Lol 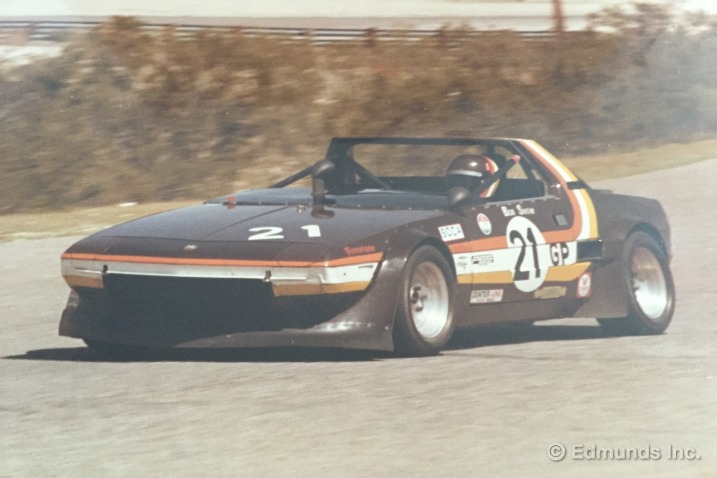 Ya, the VW crowd had that look nailed: 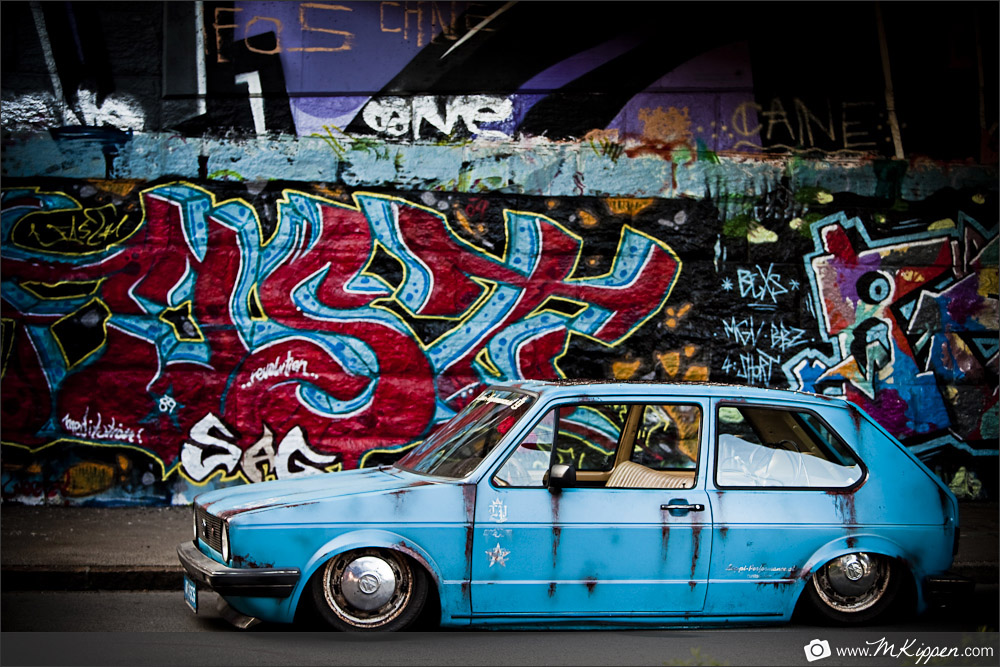 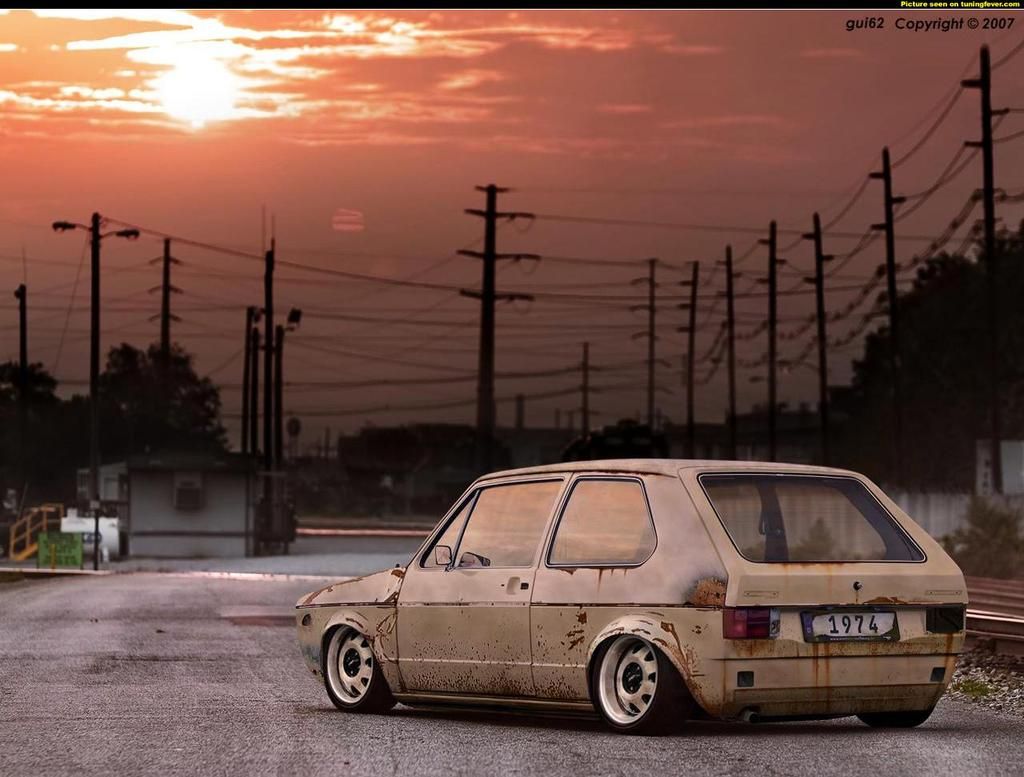 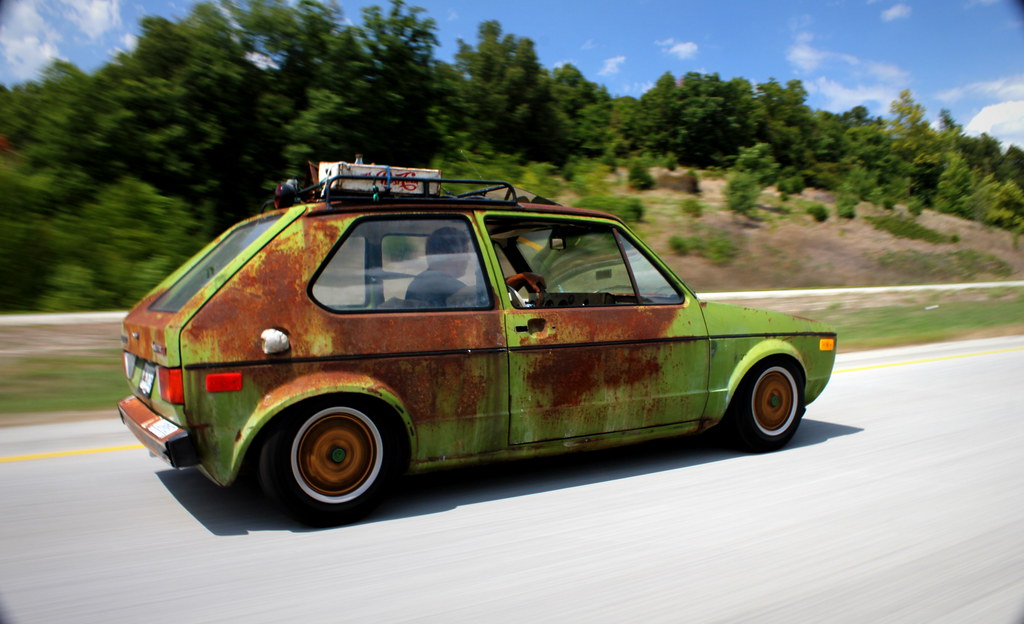 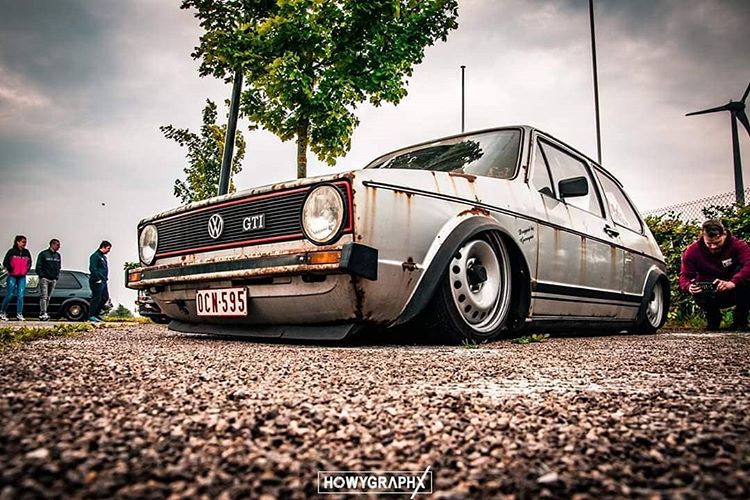 It comes natural on those cars; they get rusty but it never seems to be bad enough to actually kill them. There are much better examples than these, but I'm not a fan of the ones that completely srtip the body to bare metal and then make it rust by pouring saltwater over it for days - it doesn't look natural: 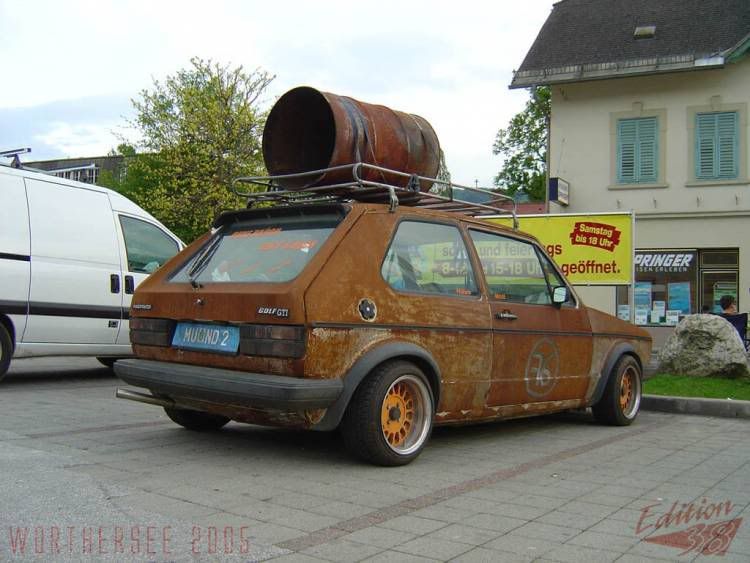 I'm completely with you about going with the track look because it's easier and cheaper. What's great about starting with a junker like we're talking about is you can't screw them up, they won't get any worse no matter what you do. Makes it fun to experiment and cut the hell out of them...you know the types of modifying and customizing that many of our members cringe at.
As for terminology, there are many other names that might fit; POS (piece of ****), POC (pile of crap), E. coli, Tetanus, etc.

Eastep said:
Charcoal canister was next on the block, followed up with removing the carburetor (34 DMTR).
Click to expand...

This thing came with a 34 DMTR? You scored.

EricH said:
This thing came with a 34 DMTR? You scored.
Click to expand...

Also has an Ansa exhaust.

Eastep said:
Also has an Ansa exhaust.
Click to expand...

Build it the way you want it and then come up with a generic name, don't build to a specific "style", leave that for the TV guys. The no money builds tend to interest me the most since I can relate to it. 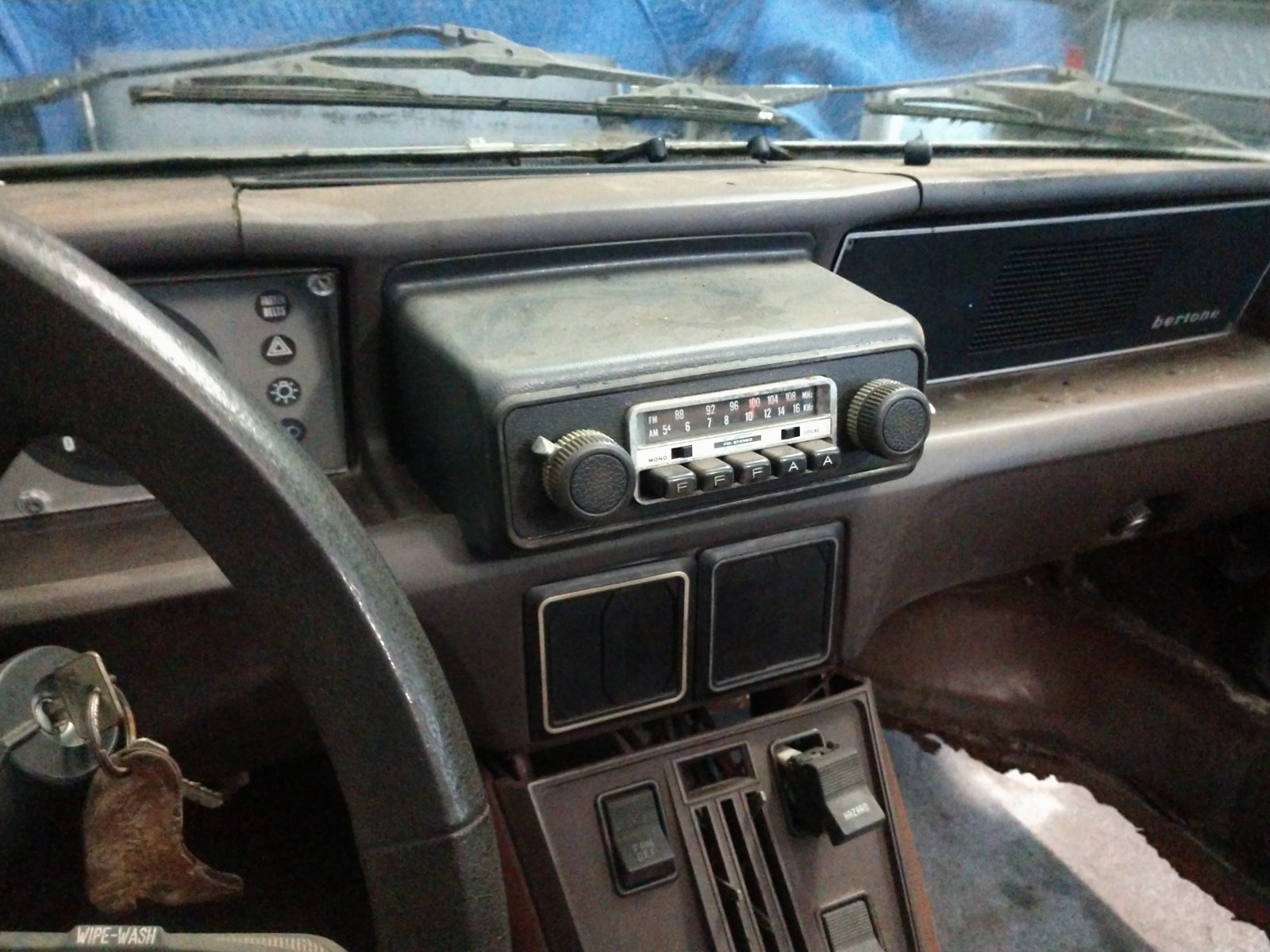 Look's like it'll be fun. A friend of mine and my brother in-law had this in the 80's.
When you clean up the carb would you mind posting the jetting. I'm running a 34 as well.

Here's my take on the VW